Metalcore isn’t dead. It just needs to manifest its rage more convincingly. To that end, Heart Of Jordan have the drive and passion to conjure high-decibel fury. Today, AltPress is premiering Heart Of Jordan’s new video, “Echoes Still Remain.”

“Lyrically, the song is about the struggles of trying to help an addict stop the vicious cycle of addiction,” vocalist Preston Mailand tells AP. “Visually, the torture scenes of the video represent a prequel to our ‘Deny’ music video storyline, using the metaphor of torture to articulate the song’s message. The beginning of the video shows a bit of a sequel to the ‘Deny’ story, letting the viewer know there is more to the story. And look out for the plot twist at the end.”

The Lansing, Michigan-based Heart Of Jordan—Mailand, guitarists Elijah White and Eric TenEyck, bassist Alfonso Civile and drummer Andrew Everett—issued their self-titled debut last year. The record is an amalgam of heavy music history, reveling in classic metal tones, as well as attempting to etch their personal mark into the greater veneer of metalcore.

The expert production of John Schroeder (King 810) went far to help convey the kind of power the men of Heart Of Jordan wanted to take outside of Lansing and into Earth’s greater hard-rocking consciousness. Sharing stages with such perennials as 36 Crazyfists, the Plot in You, Light The Torch and Nonpoint have also gone far to help them maintain their A game.

“We grind every day looking for new fans, constantly spreading the word and discovering connections to further introduce our band and our music to the world,” Mailand says.

Check out “Echoes Still Remain” below, and if you wish to pick up what Heart Of Jordan are throwing down, you can certainly do that right here. 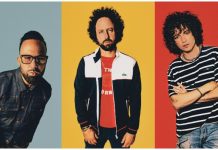