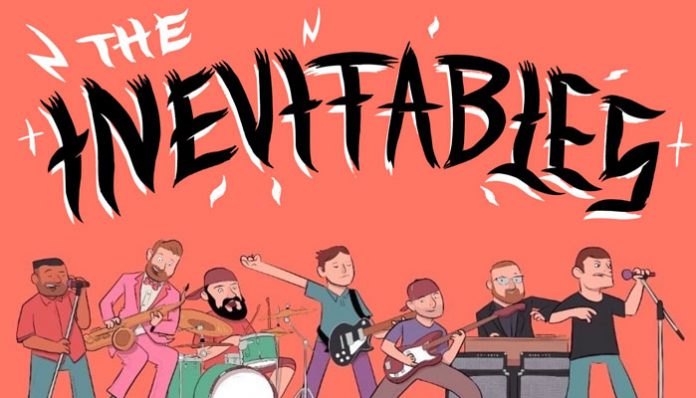 Is it a supergroup? Or is that the sound of 2-Tone ska being piped into the halls of the Justice League Of America? Actually, it’s both. Former Less Than Jake drummer Vinnie Fiorello and Westbound Train frontman Obi Fernandez have created the Inevitables, a multimedia project encompassing both comics and some fine ska music. Today Alternative Press is premiering the lyric video for their song “Ft. Lauderdale” so you may get a taste of both the full-length and the single-issue comic book.

Fiorello and Fernandez have put together some great talents on both platforms. The aggregate on the music side also includes Matt Appleton (Reel Big Fish), Billy Kottage (the Interrupters), John DeDomenici (Jeff Rosenstock, Bomb The Music Industry!), Alex Stern and Jon Degen (Big D And The Kids Table) and Sean-Paul Pillsworth (Nightmares For A Week).

Giving the assist on the comics side are scriptwriter Jono Diener (The Swellers, Baggage, No Trigger), artists Devin Watson and Liana Kangas (TKO, Vault, 2000 AD, Black Mask, Image), layout artist Fabian Lelay (We Are The Danger, Jade Street Protection Services) and letterer Cardinal Rae (Marvel, Image, ComiXology). It’s an ambitious work between the two platforms. By the looks and sounds of the video, it comes off as positively killer. And it doesn’t stop there: The band are looking to play live dates to create this universe onstage.

Fiorello checked in with Alternative Press regarding the nature of the project, the song, the comic and whether or not he’d get in the van again.

You’ve put together talented teams for the project on both the music and comic sides. Tell us about the comic that “Ft. Lauderdale” is being packaged with.

The Inevitables are the characters in the comic, and we are bringing the soundtrack to the story. Both the music and the comic can exist separately, but we wanted to push the idea of doing both in parallel.

The Inevitables story takes place in the not-so-distant future when Big Pharma has been able to produce a “cure for death.” Of course, there’s a big number on the price tag that reflects such a coveted item. Just like the bridge itself, it further divides the mega-wealthy from the working class. It’s about time they get a reality check that playing God has consequences, and death is inevitable.

Read more: Can you identify the fake band name from the real ones?

One side of the bridge is the home of the Inevitables: an unlikely team of a punker, drug dealer, graffiti artist, a mystic bodega owner and a middle-aged Christian couple who come together to take on the challenge that is Knight Pharmaceuticals. Dr. Tillerson Knight, owner of the massive corporation, is part of the mega-wealthy living across the bridge. As tensions rise, so do the stakes. There are only 40 days to save the world, and this is only the beginning.

What is “Ft. Lauderdale” about? Is it a cautionary tale about a free spirit who simply DGAF, or is it an autobiographical take on members(s) of the band?

Like all of my lyrics, this started in my autobiographical chamber. But as the idea of the comic and concept for the record started to jell, we pushed it through the filter of one of the main characters in the comic, Joe Swan. It’s a cautionary tale of when you let yourself fall, it might be too far and be too far gone to come back from.

There has to be a story about the band name. Were you all friends or mutual fans of each other’s other bands? How/when did the project come to fruition?

The band name comes from the group of characters in the comic, a loose-knit group of nobodies pushed together through fate tasked with saving the world. Band-wise, most of us had the pleasure of knowing each other and touring together for years now. Myself and Obi started pulling the idea together last September and pulled people one by one, playing, writing and creating into our orbit. The music scene is a small one, but the ska music scene is even smaller. The best projects are when friends come together and all bring different strengths to a project. This is definitely the case with the Inevitables.

After resigning from Less Than Jake, you’ve got some stuff on your plate with the labels. What made you want to start playing again? Or is the nature of the Inevitables a lot less regimented and scheduled? If so, do you think there could be a time when all of you are getting in a van and doing it? Or are your expectations completely managed right now?

I left touring for more of a connection to my daughter, to be present in her growing up and me seeing it firsthand and not through FaceTime. That most definitely doesn’t mean that I hung up my creative side for business side or even my dad side. I continued to push into writing lyrics and songs, as well as a book of short stories that came out in June and [am] continuing to write my first novel.

I think COVID-19 makes all thoughts of live gigs managed. And in the case of something like the Inevitables, even more so since everyone has other priorities, musically. Our thought is that in the future, we will play live. It will be fun to get out and play these songs live, as well as craft the world onstage visually.

What’s the status of the music? What will be the next step after the release of the comic and record?

We have all 11 songs tracked, and almost half are mixed and mastered. It’s pretty exciting to be done on the recorded side and in mixing stages for all of the songs. The next step is pushing through the sequential art for the book and planning the rest of 2021. We have crowdfunded this project, and it has one week left. It will be great to start getting the release for vinyl together and getting everything into production.

Check out the lyric video for “Ft. Lauderdale” below. And if you want to assist in the crowdfunding process, head over here.