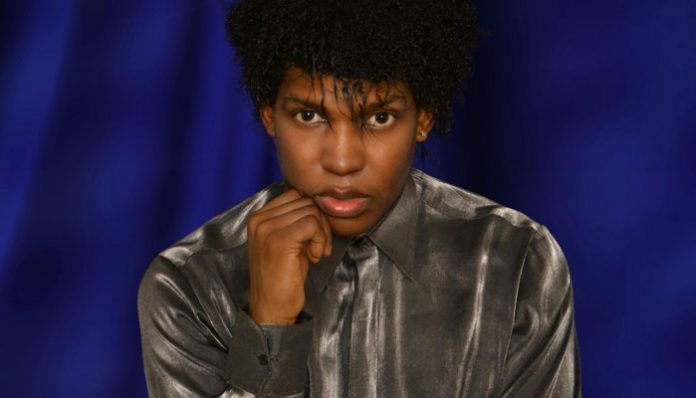 There’s something bold and brazen about the culture of the “punk lifer.” No cubicle farm could ever hold them. And they’ve spent more on tats and piercings than they have utility bills. With no fixed address, their only roots are in the scene. Fortunately for him, that life wasn’t good enough for Prince Terrence.

It’s been a very long time since he was raising his heart rate in front of a circle pit. As a young Black man in Louisville, Kentucky’s hardcore scene in the late ’90s and 2000s, Terrence was an outsider within a scene of outsiders. He built his reputation powering emo/hardcore hopefuls Christiansen for seven years, touring with bands great and small. But after three albums and tons of road miles logged, Terrence wanted more.

Read more: These 16 Afro-Punk artists made huge contributions to alt-rock

He began playing with Recover’s Dan Keyes in his next outfit, Young Love. Terrence then ended up manning the drums for such dance-punk outfits as Santigold and Heartsrevolution. He even started his own post-punk outfit, Hussle Club. But when the financial burden of trying to keep a band solvent in NYC became too much, he folded the group.

These days, Prince Terrence has reinvented himself as a triple threat. He’s an in-demand club DJ who knows the science of escalating a dance floor. Terrence is also the editor of and creator of the digital culture magazine/record label Cell Vision. And finally, there’s Rare Form, his musical outlet for mixing smooth grooves with post-punk mystery (Let’s call it “goth slow jams”). Sometimes, you can see Terrence onstage with Steve Aoki when the superstar DJ needs some rhythmic muscle.

Read more: Rage Against The Machine on why doing is the best way of saying

The Prince Terrence story is fascinating. As a POC, he always felt like an outsider within the greater walls of an outsider scene. And as much as he embraced hardcore and its attendant camaraderie, he knew it wasn’t the pinnacle of his skills. Where he is now is a far cry from Warped Tour. But it’s supposed to be.

You came up through the Lousiville, Kentucky, hardcore scene of the ’90s, playing drums with Christiansen. But there was a different type of energy happening with Christiansen. It wasn’t a bunch of guys singing through their adenoids about their girlfriends leaving them. That band were ahead of the times.

When you listen to Christiansen, maybe one of the first things you’ll notice is the rhythm section. It’s at the forefront in my mind. It was me and Brad [Magers], who plays bass in the Bronx now. We were best friends in first grade, and we learned our instruments together. He used to go to a guitar lesson in middle school. During his whole guitar lesson, I would be out in the other room playing on all the demo drums because I didn’t have my own drum kit. So we grew from that. It’s how our friendship is—just always locked down. We started our first band together. I think Christiansen were our first real band that went further than our garage or our parents’ basements. I listened to the records fairly recently, and I’m like “What were we thinking?” [Laughs.]

Exactly, you were ahead of the game, even within the hardcore scene. It wasn’t indicative of what was happening at the time.

All of those influences just merged and became this post-punk, jazzy strand of hardcore emotional music. It’s just all over the place.

Christiansen played house shows, and we played the House of Blues. Big shows, small shows, Warped Tour. We had so much invested in the band, like so much time and so much blood, sweat and tears, as they say. But for me personally, I had to make the selfish move and see what else was out there. I was watching other artists from Louisville that I once looked up to that were in darker places. And I attributed all of that to them not having the opportunity to step outside Louisville. Louisville was always looked at as a mini-music mecca. Bands like Slint came out of there and Rodan, those types of bands. Later on, My Morning Jacket put it back on the map. That was what happened at the time when Christiansen dissolved. But I had gotten an opportunity to get out of Louisville and move to New York. I always felt the energy pulling me to New York. At that time, you just feel something is shifting in your life. And that was that moment for me where something was drastically changing.

You moved there to play with Dan Keyes’ new band, Young Love. By that time, a lot of bands were looking at their existence, in terms of sheer careerism.

That was around the time when Island Records was signing all the hardcore bands, the bands that [Christiansen] would tour with. Thursday, the Bronx, Thrice. The major labels infiltrated the hardcore scene and just signed everyone. There was a shift, like when you saw At The Drive-In or Thursday on MTV for the first time. Or My Chemical Romance. You just saw this explosion of those bands around that time. That was a time when a lot of bands that were doing it for fun became more and more career-minded. Everybody had fancy booking agents and managers at that time.

As a member of Christiansen, you toured with all kinds of bands considered hardcore. And even more who were leaning pop. But you were really entrenched in this community. But let’s face it: It’s also an extremely white community. Did you experience any racism?

That’s a crazy thing. I look at what’s happening now, and I think back about those early days. Like the night we were going to be driving through the middle of Mississippi at 2 in the morning. I never thought of any of those things. And I think that this is really weird because all of these things were still happening back then. But I didn’t have any concept of it. I wasn’t aware of it. I just thought, out of sight, out of mind. But as far as the scene, I never experienced anything like it on the race side.

I was always most of my white friends’ only Black friend. The older I get, the more it bothers me. Not by any fault of their own. Obviously, just because people that are into certain things gravitate toward certain things. I can count on my hand the number of hardcore indie-rock dudes who live in Louisville that are Black. I was the only Black kid  at every show I ever went to. But no one ever came up to me and called me the N-word or anything like that. But it never crossed into my world.

It’s good that you were never marginalized or slurred in the scene you came up through.

When I was in high school, the scariest moment racially that has happened to me didn’t happen directly to me. I went to this show to see Helmet on the bill, and the headliner was Korn. The opener was Limp Bizkit before they were big. I think they were giving us their tape with that George Michael cover on it. So it was a Korn show. And Korn fans are reckless. There’s a Korn show in Kentucky, and you can imagine that there’s a lot of rednecks.

Read more: Here are 10 times Rage Against The Machine brought truth to power

I’m standing there. And then suddenly people around me start saying “white power” when Korn were about to start. People are yelling random things, right? And these guys are chanting “white power.” And I’m like, “OK, how did I get in the middle here? Really?” I put my hood on and put my hands in my pockets so they couldn’t see my skin color. That was probably the closest I came to a scary situation. Late ’90s. I was definitely still in high school.

Why do you think people of color never got involved in hardcore or the whole scene of dudes playing guitars loudly and quickly?

Well, I can only speak for the thing that I’m a part of, and there’s just a big disconnect between them. There’s a lot of suburban white kids, and I’m a suburban Black kid. I was born in Detroit, and we grew up in the projects. Part of the reason we left there [was] because my grandfather had gotten out of the projects and bought a house. You see a picture of my first-grade class. There’s like three children of color. You do the math. Like, one of those kids might be into heavy music.

When I look back at why I listen to the music that I listen to, I was tricked into it in a way. And if I wasn’t tricked into it, then I probably wouldn’t have ended up playing with the band that I played with. I was super-into Rage Against The Machine. I was always into rock ’n’ roll music from a young age. I used to sit in front of TV and watch MTV. Guns N’ Roses and Whitesnake videos while waiting to be taken to school. I discovered Jimi Hendrix from one of my cousins who was like, “You should listen to a Black rock ’n’ roll artist.”

So I found this scene in a really strange way. I was thinking that if I never met the people that I met and if those things didn’t happen, where would I be? I was playing football and baseball. I would probably be an athletic type. Never listening to that music. Never gotten into a band. Or never put Xs on their hands and got in an Earth Crisis mosh pit in the ’90s.

After Young Love ended, you started playing drums with Santigold and Heartsrevolution. You then had your own band, Hussle Club, throwing down post-punk vibes. Now you’ve reinvented yourself as Prince Terrence, a DJ, and you’re making music under the name Rare Form. What made you walk away from band life?

I started DJing as Prince Terrence because the hardest part about touring is not touring. You come home, and you aren’t getting paid, and you’re like, “OK, now what?” I’ve been DJing for the past 10 years in high-end clubs around the city.

It’s a blessing and a curse because I’m always moving. And people have to catch up. The whole reason I moved to New York in the first place is because I never wanted to be that guy that was only known for one thing.