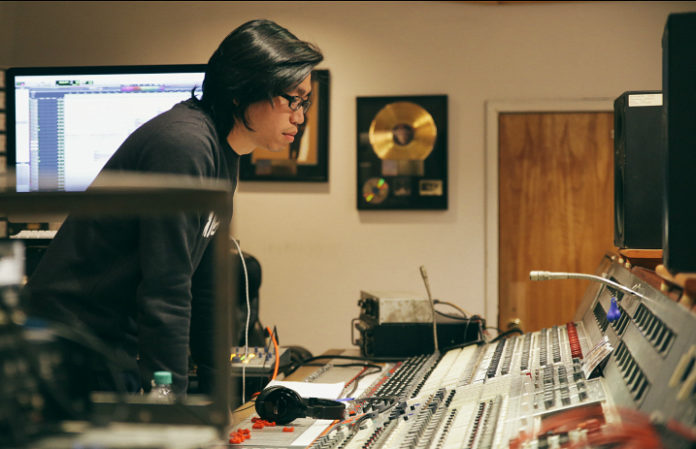 Will Yip has been working as a recording engineer, mixer and mastering engineer for more than a decade, but you’d never guess his veteran status by talking to him. The Philadelphia-based producer speaks with an infectious and boundless enthusiasm, his diction littered with emphasizing expletives and the youthful veneer of someone half his age who may have just discovered this world of contemporary rock subculture. Yip himself—who has worked tons of talented artists including Circa Survive, Balance And Composure and Title Fight—has made significant inroads. When one asks how he’s been, it’s unexpected to hear him initially say, “I’ve been tired.”

He says it with an audible smile, granted, adding that he’s the busiest he’s ever been. When reached by phone, he’s right in the swing of recording the new album by Pianos Become The Teeth, whose 2014 effort, Keep You, he helmed as well. More importantly, however, he’s also a month out from the release of Tigers Jaw’s spin, the first from Black Cement, his new imprint under major label Atlantic Records.

The imprint has been in the works for some time. Yip recalls being contacted by employees at the Atlantic-affiliated Roadrunner Records—who over the last year scooped up hardcore’s arguably two biggest names, Code Orange and Turnstile—on the final day of recording for Citizen’s sophomore LP, Everybody Is Going To Heaven. “I remember like it was yesterday,” he says, even pinpointing the date as Jan. 30, 2015. “The guys wanted to have a meeting, just meet me and come down to the studios just to hang. I love hanging, I love meeting new people—[but] I didn’t know who they were.”

“I just had to do all my research and be sure that this was a safe place. Frickin’ Warner Bros. is a big place.”

When the offer of starting an imprint under the Atlantic banner was first pitched, Yip actually declined. “I honestly said no at first,” he says. “I was already doing Memory Music as my own indie thing where I make all the decisions, pay for everything—everything’s out of my bank account. I’m the creative decision-maker, and I never thought of really working with a major record label because [of] creative control.”

As time went on, Yip mulled the offer over and began to seriously consider the partnership. “The more we talked, the more we worked out a potential deal,” he says. “I just had to do all my research and be sure that this was a safe place. Frickin’ Warner Bros. is a big place.”

He also found them to be genuine fans of the music yielded by Yip’s world. “Every single record they picked up was a band that they liked [and] had my name on the back,” he says, also recalling a time he visited the offices and met a future colleague. “She had a Cold World hat, and I’m like, ‘Oh, shit.’ They are real people there, they are fans of this world, and that’s why I back it. I think that’s why it worked out.”

He also gets the benefit of “the fucking machine” of a major like Atlantic, with resources to push bands to radio and land large tours. “The bands that want these resources, it’s cool that we can give it to them now,” Yip says. “Give them the opportunity to really break, and to have a greater reach.” He speaks of an enhanced ability to reach the average music fan, too, the ones attuned to pop acts with punk roots. “That’s the goal, just to make people that are already listening to Paramore, or Panic! At The Disco—if they just heard Tigers Jaw, they would fall in love with them.”

Astute fans of Yip’s world and its historic roots might remember the gold rush of the ’90s, when the success of Green Day’s Dookie spurred major label interest in punk rock, as well as the early 2000s, when “mall-ternative” acts like My Chemical Romance and Fall Out Boy entered mainstream consciousness. They might also wield the same cynicism Yip had when first pitched on Black Cement, but Yip sees a distinct difference.

“I want to work with bands that can be around forever…”

“People are learning that a lot of times, that shit doesn’t work,” he explains. “The word is ‘capitalizing.’ That doesn’t work. I want to work with bands that can be around forever: your Quicksand status, your Deftones status. Quicksand, they come back in 2012 after being gone for 15 years or whatever, and people are still gonna fucking go to the shows. Bands like that, they’re worth something. They touch people. [When] Green Day broke, the Offspring broke, everyone tried to sign the next three-piece California punk band or whatever, it didn’t work because it was just capitalizing. This isn’t that. What Roadrunner’s doing isn’t that. What was the predecessor to Turnstile? You know what I mean? No, they just love Turnstile. They just love Code Orange. They just love this world of fucking—whatever you call it—alternative, indie/punk music. They’re doing it because they love the music, and that’s what’s different about it.”

Unlike his aforementioned indie label Memory Music, Yip is heading Black Cement with a flexibility on which projects he’ll work: He may not necessarily produce or record every album. “Black Cement, it’s bigger than me,” he says. “Black Cement is not about me. It’s about bands that touch my heart, man, that touch my soul. If they produced their own record, or they have a producer, dude, we’re gonna be investing in them.” The imprint is also open to bands with less established foundations than Tigers Jaw. “There’s gonna be no limits,” Yip says. “We’ve been moving across the board, across the spectrum with it.”

It’s a comfortability and confidence that instills deep faith in Yip that he has the tools to push bands he believes in further than ever.

Yip isn’t worried about control and decision-making, either. “Everyone’s afraid, these bands, when you work with record labels,” he explains, “They’re afraid of [losing] creative control, these A&R dudes telling them what to do—I’m that fucking guy! I’m that guy now, and I’ve been doing that in the studio forever.”

It’s a comfortability and confidence that instills deep faith in Yip that he has the tools to push bands he believes in further than ever. “[Atlantic] just found that this is so engaging and has potential to touch a lot of people,” he says. “Like I do, that’s why I preach it. That’s why I record the bands I do. Because I think this shit touches souls, and all these guys over there believe in it.”