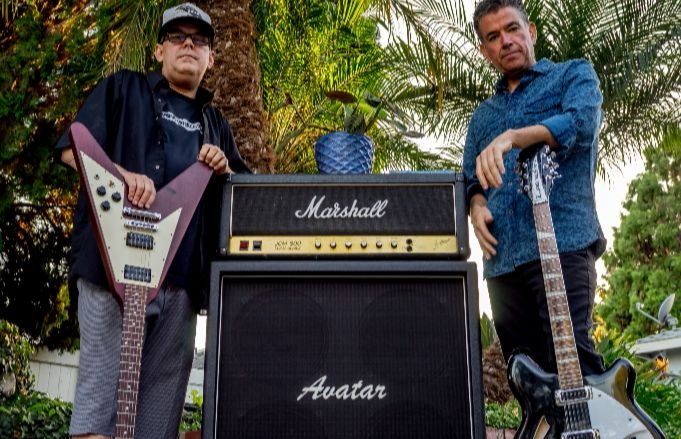 “I think the independent spirit of punk is all throughout this record. The thing I always loved about punk was the idea of ‘no rules.’ We have enough rules in our daily lives.”

Alfredo Agnew is a mathematician at Cal State Fullerton whose recent work is exploring the creation of gravitational waves, waves which are formed when seismic, explosive activities occur in space. “A lot of things in the universe are of a wave nature,” Agnew explains. “Light is the waves of the source traveling to your eyes. Gravitational waves are massive dense objects that, if they move in a complicated enough fashion or crash into each other, they will cause space and time itself to wave. And then that propagates waves.”

Neil deGrasse Tyson might be lecturing on the latest Avenged Sevenfold album, but Agnew is bringing both the science and the rock with Professor And The Madman. It’s a perfect metaphor for the man friends call Alfie, who’s been making sonic waves since he was a tweener in the ’80s SoCal punk scene as a member of the Attack and D.I., as well as alongside his punk-royalty brothers Rikk and Frank in the Adolescents in the late ‘80s. Although Agnew’s studying the cosmos and his musical colleague Sean Elliott (formerly of post-grunge art-metal outfit Mind Over Four) is involved in real estate, the duo still have lots of music to get out of their system.

AP is premiering the video for “Space Walrus” from Professor And The Madman’s upcoming album, Disintegrate Me. “Making the video, like making the album, was a lot of fun,” says Agnew about the song’s neo-psychedelic, Britpop-flavored vibe. “We wanted it to be funny, very old-school. The story in the song is pretty vivid—not a whole lot left for interpretation. We wanted to do something charming and quirky where both the U.S. and the U.K. were having a competition on who would get to the moon first. It’s very much in the spirit of Buck Rogers meets Georges Meliés’ A Trip To The Moon, with animated cut-outs. We turned into Elton Sean and Alfie Stardust and just hammed it up.”

“We wanted to pay homage to the late ‘60s and early ‘70s space songs,” Elliott offers. “They are still classics, and you never get to hear anything like that anymore.”

The nine tracks on Disintegrate Me are a mix of different styles showing a remarkable amount of creative vision. Much of the record hits a melodic punk/Britpop sweet spot that harkens back to the Damned’s 1980 masterpiece, The Black Album, and the best parts of Oasis’ catalog. Agnew and Elliott did their time in the punk wars and have absolutely nothing to prove to anyone—but they did anyway. From charging melodic punk (“Nightmare,” “Useless”) to the neo-psychedelic (“Space Walrus”) to melodic heartland rock (“Wishes,” “Faces”) to joking acoustic whimsy (“Demented Love Song”), Disintegrate Me is inexplicably cohesive, just like that playlist you say you’re going to make but never do.

“I’m not even sure I know 100 percent,” says Agnew about the origin of his and Elliott’s sonic realms. “Sean and I collaborate really closely on every aspect of the project. We have a really wide background of influences. We’re both younger children, so we would listen to whatever our older siblings would play. That was a lot of British Invasion stuff, prog rock, glam and the early, early punk stuff. But when we went through our young adult years, we got very focused into punk in the ’80s when it had kinda homogenized into the more raucous hardcore stuff. As we got older, we not only rediscovered the pre- and early punk influences, we started to listen to other music. At this point, we’re kinda genre-free because we’ve been around long enough. We didn’t do a lot of things intentionally; we wanted to keep it honest and true. That sounds very cliché, but really, in our musical careers, the best stuff that happened was when we were pleasing ourselves.”

Agnew credits the participation of the British starpower rhythm section of drummer Rat Scabies and bassist Paul Gray as “a combination of dumb luck and modern technology.” Scabies—an original member of punk avatars the Damned—plays with the SoCal desert rock outfit the Mutants. Agnew, Elliott and vocalist Darren McNamee play in a pick-up punk covers band on the weekends and played a lot of Damned songs. Two years ago, McNamee brought Scabies to one of their gigs and the drummer got behind the kit to play with them. When Elliott and Agnew were recording their first album, they invited him to play on a track, which led to Scabies being a regular contributor to the band, recording his parts and sending them back to the duo via internet. Elliott contacted Gray (who recently rejoined the Damned ranks last fall) via Facebook to see if he’d be interested in playing alongside Scabies’ recorded tracks. Gray liked the songs he sent over, and the rest is history.

Disintegrate Me is actually Professor And The Madman’s third album, but the first featuring the SoCal, Cardiff and London axis of players. (“Those records weren’t widely distributed or publicized,” Agnew says. “It was still a concept, to be honest.”) When Scabies and Gray got involved, Agnew and Elliott thought it was something that needed to be taken seriously so more people might hear it. But unlike most musicians in bands struggling to be heard on the internet, Agnew is a tenured professor with financial stability, and doesn’t have the great need to line up at the social media trough or play 200 shows a year. Professor And The Madman make music for the sake of music, without any need to fit into a sonic prison foisted upon them by music-biz suits telling them what chorus the guest rapper will spit over.

“That’s exactly what this is about,” Agnew stresses. “I think the independent spirit of punk is all throughout this. The thing I always loved about punk was the idea of ‘no rules.’ We have enough rules in our daily lives. One of the things Sean and we said when we first agreed to do this was, ‘OK, the decisions are going to be first, middle and last our decisions.’ Sean’s a very successful mortgage broker/real estate guy. We don’t need this financially, and now we’re in a position where both of us can finally afford to do 100 percent honest music. Even when we were young, punk gave us the permission to say, ‘We’re going to do this our way. We’re going to have to get careers, first.’ [Laughs.] If this doesn’t get super-popular, we don’t really care. We’ve already won.”

Very good. But have you kept your punk-rock past and cosmic rock alter ego under wraps from your co-workers?

“You know what,” Agnew starts to laugh, “I’ve done a pretty good job of keeping that under wraps. But the internet and social media being what it is, it’s definitely been leaked to some of them. Fortunately, the vast majority of my colleagues are spirited individuals. If somebody doesn’t like it, I certainly haven’t heard about it. And that’s the other great thing about growing up in a punk environment: You don’t worry too much about what other people think!”