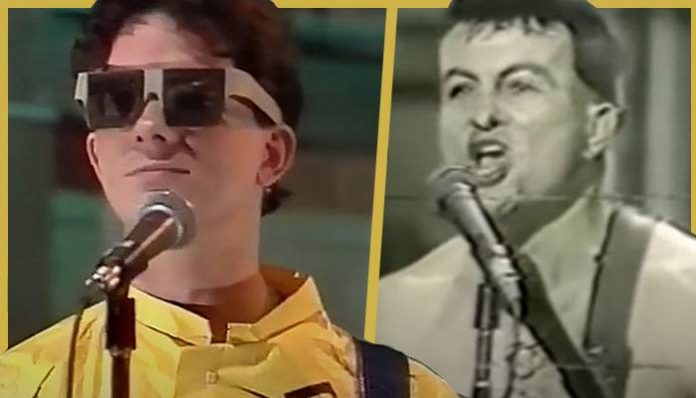 “Live from New York, it’s Saturday Night!” Those words have rung out across American airwaves at roughly 10:35 p.m. every sabbath for 45 seasons. Saturday Night Live (fondly and culturally known today as SNL) which premiered under its original title of NBC’s Saturday Night Oct. 11, 1975, became one of history’s longest-running US TV series.

Punk acts (or musicians who inspired punk) appeared on SNL often over the years. Certain British bands made their U.S. TV debuts on the show. Dead Boys guitarist Cheetah Chrome, a friend of original cast member John Belushi, once appeared mugging for the camera in a break-away audience cameo as directors cut to a commercial. Sketches reflected punk culture, such as the several that Fred Armisen had masterminded in 2013. From time to time, punk guests would wreak so much havoc in the Rockefeller Center studios, they’d find themselves banned from the series forevermore.

Prohibition of certain luminaries or not, punk and its attendant culture have always been part of the fabric of SNL. In the interest of preserving this association, Alternative Press presents 10 of the most punk moments in SNL history. But possibly nothing could have been more punk than the very first instance of the music infusing the show: April 17, 1976. Guest host Ron Nessen, White House Press Secretary under President Gerald Ford, stared into the camera, announcing, “A special, uh, treat for me tonight—and I think for you, too—is the Patti Smith Group…”

The first words out of her mouth: “Jesus died for somebody’s sins, but not mine.” The show already punctured sacred cows and taunted the establishment on a weekly basis. Now here was the Bowery’s punk poet laureate in America’s living rooms, committing blasphemy atop Them’s garage-punk standard “Gloria,” given a new free-verse lyric, ending with a shout-out to CBGB. Two years later, cast member Gilda Radner would uncannily spoof Smith as “Candy Slice” in a skit. For now, the show was content with high school and college campuses buzzing Monday morning about what that singer said the other night.

It was to be the Sex Pistols’ U.S. TV debut that night. But manager Malcolm McLaren botched their visa applications. Elvis Costello, then on a U.S. tour, stepped in at the last moment, after the Ramones refused. Scheduled to play his debut single “Less Than Zero,” Costello interrupts the Attractions one line in, announcing, “I’m sorry, ladies and gentlemen, but there’s no reason to do this song here.” Counting in “Radio Radio,” Michaels fumed in the wings, banning Costello from the show for decades. The incident was restaged with the Beastie Boys on an SNL anniversary special 22 years later.

“Did you see what that weird band did with the Stones on Saturday Night Live the other night?!” U.S. dorm rooms and schoolyards echoed with the exclamation for weeks after Akron’s techno-punks guested the night comedian Fred Willard hosted. Rock bands weren’t meant to yank around like robots in yellow hazmat suits, performing barely recognizable Rolling Stones classics in a herky-jerky fashion. DEVO traumatized TV viewers for years, cementing the term “punk” in American minds as “anything weird.” For years after, a redneck yelling their name was a cue for a punk rocker to run for their life.

America’s SNL/WTF moment for 1979 was essentially David Bowie introducing mainstream televisual eyes to performance art. Following actor Martin Sheen’s introduction, NYC performance artist Klaus Nomi and Joey Arias picked up a Bowie rendered immobile by a stylized statue of art deco tuxedo and walked him to the center mic. The duo assumed positions as backing vocalists, as a backing unit consisting of Blondie keyboardist Jimmy Destri, members of Chic and touring guitarist Carlos Alomar ignited a new-wave-ish rendition of his 1970 classic. America’s minds were blown as Nomi and Arias walked Bowie back to the drum riser.

“Bernie Rhodes knows. Don’t argue!” shouted Specials co-vocalist Neville Staple, brandishing a toy machine gun as he leaped onto the stage, as the ska-punk kings detonated a furious version of their debut single. Surely, neither host Strother Martin nor SNL’s audience understood Staple’s dig at the Clash’s manager. Nor would they understand, as the Specials made their U.S. TV debut, that they’d revived Jamaica’s original pop sound with punk seasoning as 2 Tone, ruling the U.K. with the nonstop groove. But they certainly responded to the energetic and wired performance—and their defiant attitude walking off three minutes later.

It would be almost a year later before SNL allowed punk back on its stage. This time, it came in the form of the Clash, newly ascendant to the U.S. charts in the form of their five-month-old Combat Rock LP. Surprisingly, it wouldn’t be breakthrough single “Rock The Casbah” they’d play after Ron Howard introduced them. Joe Strummer and co. instead treated Rockefeller Center and home viewers to their treatise on Vietnam War babies “Straight To Hell” and Mick Jones’ future garage-punk hit “Should I Stay Or Should I Go.” No slam dancing, no damaged cameras, just a great Clash performance.

The Replacements got host Harry Dean Stanton drunk at afternoon rehearsals. Already having made drunken nuisances of themselves since arriving at Rockefeller Center that day, they positively roared their way through “Bastards Of Young,” from last year’s Tim. Paul Westerberg kept going off-mic and yelled “Come on, fucker” at guitarist Bob Stinson at the guitar solo. During the commercial break, all members but Stinson swap clothes with one another. In the middle of “Kiss Me On The Bus,” Tommy Stinson yells “darn it” into Westerberg’s mic. Bob hurls his guitar over his shoulder. Michaels bans the Mats for life.

Surprisingly, Nirvana’s one of the rare musical acts to grace the SNL stage twice. Especially considering Michaels’ propensity for embargoing punk acts over the years. But smashing up their gear at the end of a furious “Territorial Pissings,” then Kurt Cobain, Dave Grohl and Krist Novoselic all theatrically French kissing across the credits could not raise the SNL creator’s ire. The camera loved Cobain’s torn jeans and strawberry Kool Aid dye job as it panned into the beginning of “Smells Like Teen Spirit.” The song already knocked Michael Jackson from No. 1. Five minutes later, America had officially gone grunge.

Fred Armisen had played in punk bands prior to enlivening SNL with his sharp wit. During the 2013 season, he’d helmed several punk-centric sketches, including a father reuniting his high school hardcore band (Crisis Of Conformity, rounded out by Ashton Kutcher, fellow cast member Bill Hader and Dave Grohl) at his daughter’s wedding and Sir Elton John writing a punk song with Queen Elizabeth (Armisen) and Prince Philip (Hader). But the mockumentary of the 1977 Britpunk hero with a shocking love of Margaret Thatcher was genius, complete with a cameo from Sex Pistol Steve Jones and some authentically Clash-like anthems.