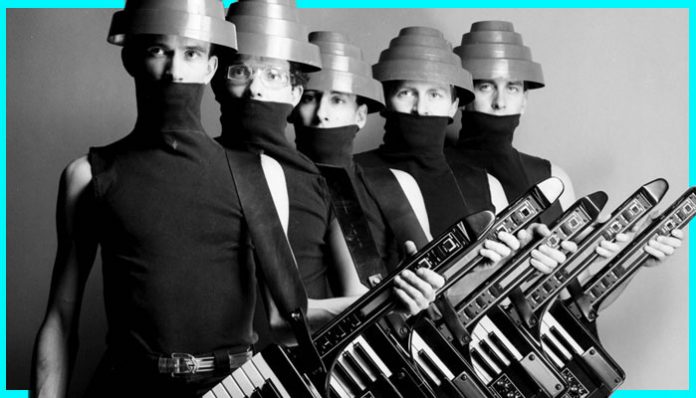 The synthesizer is an amazingly expressive keyboard with unlimited options for creating sounds both imitative and startlingly original. It was not the kind of instrument you’d see in punk circles. Beyond the realm of music schools, synths were big-ticket items that were owned by millionaire rock stars. You know, people who made music punks patently despised. (Read: the entire progressive-rock genre.) Attitudes change though. And this list is about daring punk bands that made synths and electronics rock hard. This is synth-punk.

Fortunately for mankind, there were some creative souls who had amazing ideas and access to synthesizers. Some of them could play just as great as the conservatory-trained rock gods. Others couldn’t figure out which end to blow into (if you catch our drift). You can say the same thing about guitarists. Any specific punk history is going to have its leaders, savants and footnotes. These are 10 of the bands that dared to make synthesizers and electronics rock hard.

The greatest synth-punk band you never heard. Fronted by the highly charismatic Tomata du Plenty, the Screamers  came up through the Los Angeles punk and new wave underground of the late ‘70s. And they did it without guitars. Powered by Tommy Gear (synth), Paul Roessler (electric piano, distortion pedal) and drummer K.K. Barrett, the band had songs both dark (“122 Hours Of Fear”) and snotty (“Magazine Love”). Sadly, the Screamers never signed a record deal and broke up without an official record release. Sure, their demos have been bootlegged for decades. But if you want the real Screamers experience, you need to see the Target Video DVD of the band live at San Francisco’s Mabuhay Gardens.

Meanwhile on the other side of the country (read: Akron, Ohio), high-concept wiseguys Devo had been mixing synths and guitars since the mid-70s. Their name was adopted from their concept of “de-evolution,” which posits that mankind has evolved as far as it can and is on a regressive slide ever since. (You know, like what we saw during the 2014 election.) The irony was these “spuds” were truly making some next-level culture. (Seriously: When David Bowie couldn’t produce their 1978 major-label debut, Brian Eno did.) Devo weren’t able to make cash registers ring until 1980, when their self-empowerment anthem “Whip It” ruled the airwaves. All of their bizarre and surreal artistry, dark humor and risque turns made Devo the ultimate gateway drug for new wave, let alone synth-punk. And man, the dudes can play.

Damon Edge and Helios Creed were the braintrust behind Chrome, the late-’70s entity that every synth-punk unit and industrial-rock rivethead owe everything to. It was the cumulative effect of Creed’s fearless guitar playing alongside Edge’s experimental production techniques (primitive electronics, recorded snippets of TV commercials, massive reverb and tape delay) that made Chrome stand out from well, everything. Fans, detractors and critics often used drug metaphors (“acid-damaged” comes up frequently) to describe Chrome’s otherworldiness. We can’t confirm what kind of cocktails Edge and Creed got up to (Edge died from a heart attack in 1995). But we do recognize what Creed and Edge did for post-punk, synth-punk, industrial and psychedelia since their 1983 split.

You want punk attitude, twisted street poetry and grating electronics that will make your ears ring two days after forever? When they started in the early ’70s, Alan Vega and Martin Rev, aka Suicide, were massively confrontational. But conflict gave way to influence, and you can certainly hear what this duo contributed to the continuum of punk and electronic music. (Bruce Springsteen is also a massive fan.) With only Rev’s organ and chattering rhythm machine for accompaniment, Vega bared his soul with stories of hard city living, dysfunctional love and abject madness. Their absolute pinnacle is the legendary 10-and-a-half-minute track “Frankie Teardrop.” It continues to raise heart rates and fear responses four decades after its initial release. Not a whole lot of guitar-wearing dudes a third of Suicide’s age can pull that off.

If you ever needed to be reminded how unfair the world is, listen to “High Pressure Days” by San Francisco synth-punks the Units. Their debut album Digital Stimulation had new wave quirkiness, inspired arrangements, percolating grooves and alien noises. Oh, and no instruments with strings. We’ve been told that when the Units played live, they sweat and beat on their synths the way hardcore bands hate their guitars. The band played the major-label game in the mid ’80s to record their next album, Animals They Dream About. The record was released 32 years after they broke up. The good news is that you can experience the Units’ artistry on Spotify in an era where listeners and bands are actually on the same wavelength. Give or take a decade or so.

At the beginning of the ’90s, synths got a boost from the industrial scene and bands like Nine Inch Nails and Ministry. There was still a lot of push-back from folks damaged by grunge and indie-pop claiming synths “weren’t real.” When Dayton indie-rockers Brainiac put a Moog into their quirky, obtuse tracks, those walls of demarcation crumbled like pie crust. Frontman Tim Taylor and guitarist John Schmersal kept the synth-weirdness happening, culminating in the elegantly stated final EP, Electro-Shock For President.  Now go peep Transmissions After Zero, a documentary chronicling the synth-punk band’s glorious and too short life.

Electronic provocateur Alec Empire was already making confrontational techno music under his own name. Sensing a need for something more vicious, he put together Atari Teenage Riot and started a new label, Digital Hardcore. More than just a label, digital hardcore was an aesthetic that was mechanized and intense. Synths, samplers and drum machines were practically set to ‘kill’ positions. Empire and his cohorts railed against government oppression, neo-Nazi groups and other control systems. The current state of the world could certainly use ATR’s noise engine.

The four-headed synth-and-slash hydra from San Diego have gone far to enrapture and annoy audiences on the planet. After starting in 1994 as a powerviolence ensemble, the Locust achieved more extremity by adding Joey Karam on analog synthesizers in 2001. “Sci-fi grindcore” is frequently used to describe the band’s short, sharp, synthetic shocks. But it’s only part of their legend. The band has pulled off longer dark ambient pieces (Safety Second, Body Last) that traded their electro-jitters for drawn-out dread. In an age of COVID-19, fascist governments and social unrest, who could better soundtrack our demise?

Ending this list are a group who actually named themselves after a synthesizer. Tokyo’s Polysics have been plying their synth-driven punk since 1997. Frontman Hiroyuki Harashi readily admits to a great amount of Devo worship. (They did team up with Devo frontman Mark Mothersbaugh for a one-off single.) Polysics have the uncanny knack for mixing percolating electronics, nervous dance punk and vocals that sound quite uncomfortable. But Harashi and his team have been adjusting knobs and sliders for over two decades. They know how to hit the joy circuit like any good synth-punk band should.

The Faint have been in this big electronic circus for the better part of 25 years now. What keeps people coming back to their synth-laden jams this long? First and foremost, it’s the attitude. A Faint record (pro tip: start with Danse Macabre) has the right balance of sincerity and middle-finger raising. Because it’s the stance that keeps the “-punk” suffix in their mix. The Omaha, Nebraka, quartet have been tagged as “dance-punks” and “neo-new-wavers.” But when you see them live, there’s a physicality that’s much more exiting than watching some mope hunched over his laptop mumbling his grocery list over Logic software. In a world of synthetic shrinking violets, the Faint are as unpredictable as the noise you create when you take your first synth out of the box.