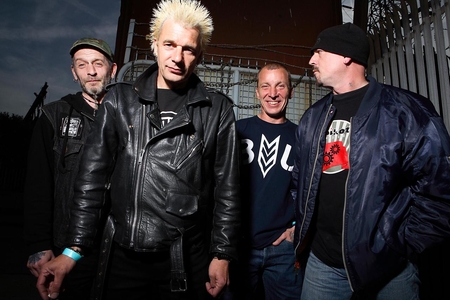 If you’ve been to a real punk show during the past two decades, there’s a significant chance you’ve seen a few denim jackets emblazoned with patches that say GBH. In case you’ve only been alive for a portion of the past two decades, you might not know what those letters mean. GBH (or Charged GBH) were early pioneers of British street punk, forming in 1978 and releasing 10 albums through 2004’s Cruel And Unusual. After a few years off the radar, GBH are back with album No. 11, Perfume And Piss, which will be released April 6 through Hellcat. Frontman COLIN ABRAHALL spoke with us about the new full-length and which trend in music is currently irking him.

Your new album, Perfume And Piss, hits streets next week via Hellcat. How did that arrangement come about?
We did some demos of the new songs, and I sent [Rancid guitarist] Lars [Frederiksen] a copy. He loved it and said maybe Hellcat would be interested. One thing led to another, and we ended up signing with them, which pleased us as we’ve been on some not-too-good labels in the past.

Outside of a few live releases and compilation appearances, the world of GBH has seemed relatively quiet since your 2004 full-length, Cruel And Unusual. What’s happened in the life of the band since you last put out new music?
Our world is never quiet. We play live all over the world all the time. We weren’t signed to anyone, so we just kept writing new stuff. We did get a few offers from other labels. We manage ourselves, so there’s always something happening behind the scenes.

Outside some of the more speed metal-like elements on Church Of The Truly Warped, GBH have stayed pretty firmly planted in the punk genre with little evolution from the original raw punk sound. Can we expect a similar feel on the new album?
We’re a punk-rock band. The new album is probably the most rock ‘n’ roll we’ve done, but it wasn’t planned like that. We never really talk about songs before we write them. They just kind of come out how they come out.

GBH have always been associated with politics and having the voice of the punk scene heard. Now over 32 years into your career, what issues can we expect to hear addressed on the new record?
I don’t think we’ve ever been cited as a political band. That’s more the anarcho-bands like Crass and Conflict. We’ve dealt with personal politics like standing up for yourself, looking at injustice and so on. Global terrorism is probably the most political theme we deal with in the song “Invisible.” [Terrorism] affects nearly everyone. For example, last year we traveled on more than 30 flights and all these new security measures are necessary–as much as I hate to admit it. Yes, it’s a pain in the arse to have to take your belt and shoes off [at the security checkpoint], but I guess it’s better than getting blown up. “Cadillac One” is about George W. Bush and “Power Corrupts” could be about any dictator.

What other themes can we expect from the album?
There’s quite a wide range. I wrote a little explanation to each one, which is above the lyrics in the album [liner notes]. Some of the subject matter covers playing in a band, respect for Joe Stummer [of the Clash], dislike of so-called “reality” TV shows, advice for young bands and my hobby of grass-track motorcycle racing.

When GBH first broke onto the music scene, many would argue there was actually something to be said and heard in music. The songs weren’t mainly about heartache and relationships, but real issues. Do you feel as veterans from this era that its your job to make sure those ethos don’t die out?
Well, yes. That’s what we’ve always done, but there’s also been the issue of not taking yourself too seriously. Fun has been a big factor. Let’s face it: At the end of the day, it’s all about entertainment.

As a band who have seen many fads come and go in music over the years, what do you think when you about what’s currently popular in both the mainstream and underground scenes?
At the moment in England, the mainstream seems to have been overrun with solo artists. I think this is all on the back of Amy Winehouse. [2006’s Back To Black was so successful, it seems every record company went out and got themselves their own "Amy.” To be honest, most of them aren’t very good or original.

Following, in the age of social networking and self-made careers, bands seem to come and go, but you’ve managed to maintain a long career. How?
Trends have always been about short-lived careers. These days, a record company will sign a band for one album, whereas it used to be three- or even five-album deals. Now if the debut album bombs, t he band are finished. We were all friends before we were in a band together, so we know each other pretty well [including] each other’s strengths and weaknesses. It’s the best job in the world–if it can even be called a job–and we know we’re very, very lucky to be able to continue to do it.

How much touring will you be doing in support of the album?
Another world tour. We’re touring the U.S. in May, June and July, and in October, we’re doing Japan, Australia and New Zealand. We’ll be playing in the U.K. and Europe all the other times.

Touring is so different from how it was when you started out. How has it changed for you?
It’s gotten a bit more slick. You learn from your mistakes, though. The first few U.S. tours we did, we never sold any merch. People just continuously asked, “Have you got any shirts?” We eventually got some organized. But now it’s second nature to look into all those things. alt