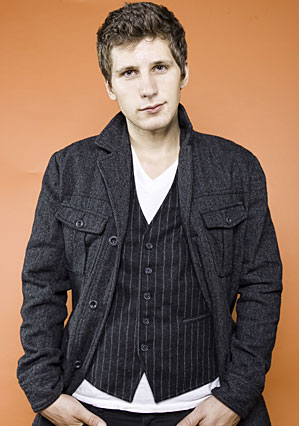 ACE ENDERS is a man who wears many hats–even if a few of them seem to be gathering a bit of dust in a crowded closet. He recently spearheaded a collaborative cover of the Verve's 1997 smash “Bitter Sweet Symphony,” whose contributions read like an A-list of neo-punk stars: Mark Hoppus of (+44), Craig Owens of Chiodos, Bryce Avary of the Rocket Summer, Aaron Marsh of Copeland, Alex Gaskarth of All Time Low, Kenneth Vasoli of Person L and Duane F. Okun of Socratic. (Proceeds from the song's sales will go toward VH1's Save The Music Foundation, which helps fund music education in schools.) Enders also fronts the Million Different People, whose second album is slated for an early spring 2009 release, runs the seemingly rusting Regular Music label and has that whole I Can Make A Mess Like Nobody's Business thing sitting on the sidelines for now. Brian Shultz recently spoke with Enders, who updates us on these sorted subjects.

Where did you get the idea to do this cover song, and make it a charitable cause on top of that?
It's a song I had wanted to cover. It's also one of my favorite songs. [I figured I could get] a bunch of people we've done tours with–friends and what not–[let them] be a part of it as well. It seemed like a really cool thing. We wanted to do a holiday song last year with a bunch of people. [This year we said], “Let's just do a regular song and donate [the proceeds] to Save The Music.” They're a really cool organization and what not–getting music in the schools and stuff.

I heard producer Chris Badami had a big hand in this whole thing coming together.
Yeah, he definitely did. I was on the road a lot. He put it all together–he got the individual vocals from everyone [and put them all together]. He did a really good job.

Was it a challenge for him to have to organize all of these things into one cohesive collaborative track?
It definitely took him a while. I mean, everybody [recorded] the whole song [by themselves]–it's a six-minute song, too. [So you can imagine] how [much music] he had to sit through. [But] he went through everybody's parts and harmonies, and made one big…whatever you want to call it. But he definitely spent a lot of time with it, and [put in] a lot of work.

Did you really love the Verve growing up or do you just really like that song?
I love the Verve, but it's a really special song to me. It opened me up to the rest of their catalog.

Moving onto A Million Different People, what prompted you to give away the band's first album, The Secret Wars, for free download?
I guess just as a “thank you” to everyone that's supported it for such a long time. I wanted to give something back to everyone, and I figured this was the way to do it.

Was it released on your label, Regular Music?
No, it was just released, I guess, through Drive-Thru. It was just sort of put up online and that was pretty much it.

Do you have any plans for Regular Music?
It's something I've wanted to do but it's a little bit hard with the way money is and what not. Definitely one day I'd like to do it again.

So are there plans to release anything from your band, or anyone else, on Regular?
No, not anytime soon. It's just really hard with the industry the way it is and all these labels folding all the time. I'd do it, but unfortunately we're running out of money ourselves.

Would you ever consider doing something smaller, like a vinyl or digital-only label?
I've thought about it, definitely. I definitely would love to. I think vinyl is really cool, and digital is obviously the easiest way to do anything, so that would probably be what we'd end up doing first.

Are you still working on the new Million Different People album, or is that in the can?
We finished it about a month-and-a-half ago.

And that'll be on Drive-Thru in early 2009?
Yeah. I think they're thinking about early Spring–like March or something like that.

Is I Can Make A Mess Like Nobody's Business on hold for now?
Well, it's pretty much carrying over into what I do now. I'll play a couple of the songs and they're along the same lines.

Is there a certain level of personal expression you feel you need to hold back with one or the other?
No. The point is to put it all out there at all times, and try [to] capture the most of each thing, I think.

There has been talk about the Early November possibly doing some reunion stuff. Are there any updates on that?
Not yet. We've talked about possibly [doing it] one day in the future, but nothing we've ever taken too seriously yet.

How about the Early November B-sides record?
That's another thing also–I guess… We want to put it out, but can't at the moment. One day, soon. It'll be out. [Laughs.] alt