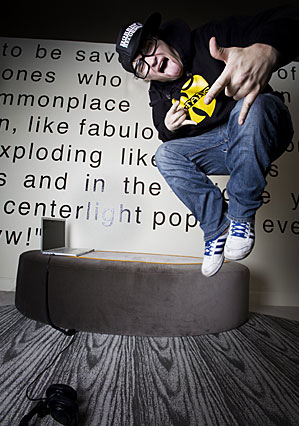 As prolific as MC LARS is, releasing a wave of singles, EPs and remixes throughout his decade-long run, his latest full-length, This Gigantic Robot Kills, has been cooking for a healthy block of time. The album is his first proper studio release in three years. As Lars has been prone to do on past efforts, he dabbles in pop-punk, ska and modern emo, flavored with witty tales and his take on hipster girls, video-game-life and his drummer's formerly messy house, as well as an ode to a passed friend. It also features guest spots by “Weird Al” Yankovic, Simple Plan, Cobra Starship, the Aquabats and more. BRIAN SHULTZ recently talked with Lars (Andrew Robert Nielsen) for an in-depth discussion about the album.

A few of these songs materialized during the last few years. Have you been working on this album all that time?
I started working on it in December of '06 and I finished it in July 2008.

Did you mean to be meticulous with the songs or did you just not have the time to work on them?
I was on tour most of the time and I wrote like 40 songs, maybe a little bit more. So I picked my favorites. It took a long time because I wanted to not put out, like, a silly parody album. I wanted to have some truth and personal stuff on it, so it just took awhile. And I was on the road most of the time, too. And I switched labels, which was kind of a big transition too.

Are you planning on recording any of the songs that didn’t make it on the album?
Yeah. They're demos and they're still being built. The next record's not gonna take three years. It's gonna come out probably February 2010 or so. I'm gonna rework some of the songs. There's some salvageable stuff.

Where Ya Been Lars? – MC Lars

In the first song, you mention opening for T-Pain–that sounds like a good story.
Yeah, he was very… bossy. We had our stuff set up and we soundchecked and he just had his turntables. Our whole setup is pretty big now–I have the whole band now and two big screens. He had us move everything so he could soundcheck. And all he did was move their turntables like six inches forward. [Laughs.] It was funny.

Was this at a fest or something?
It was a college show at Rutgers in New Jersey.

That makes sense. The Gerard Way conversation you bring up also sounds like another good story.
Yeah, he's a nice guy. He's just kind of… busy. [Laughs.] But he's cool. I like their album–the last one they put out.

When did you first meet Weird Al?
Weird Al hit me up in 2006 because he heard of me [through] “Download This Song” [because] he wrote “Don't Download This Song.” He got in touch with me like, “Hey, I like your stuff; it's really cool.” And I said “Cool, [would] you track this for this record?” and I sent him a bunch of songs. He liked “True Player For Real” the best because it had that horn thing. He re-interpreted it as an accordion part. And so it was done. We'd been in touch for a few years. He gets it. He's a nice guy and a true supporter.

It seems like nerdcore rappers and third- or fourth-wave ska bands have befriended each other over the years. What would you attribute that to?
Well, I wrote “The Gigantic Robot Kills” with Joe Ragosta of Patent Pending, and then I toured with Suburban Legends and the Aquabats, so it was kinda like a track to combine all that. Nerdcore in general, most of it is pretty happy and ska is pretty happy. I think there's crossover appeal for people who like energetic music that's positive and fun. And that song is, of course, a tribute to Wesley Willis, who before he died was gonna write an album called This Gigantic Robot Kills. So I did that as a tribute to him. And it's just funny how all my ska friends came on that song.

How did you come up with the idea of a third-wave ska kid using a robot to kill modern reality stars?
Um… [Laughs.] I wanted to make a story that was based on Wesley Willis' idea for his album. I just think that ska is fun, and a lot of people remember the '90s for having that nostalgic throwback. It was just a story that came together in my head–a fun story.

Did you have to get permission from Fugazi or Dischord Records to use the “Waiting Room” sample in “No Logo”?
Yeah, I actually emailed Ian [MacKaye] directly and sent him an MP3. It was really easy. He just wrote me back saying, “It's great. I love it. Just send us a copy of the CD. You don't need to give us any publishing or any money.” It was really cool. We e-mailed back and forth about DIY and hardcore and indie hip-hop and how it's a similar tradition. He kinda gets the post-punk, laptop-rap thing as an extension of what he started, which was cool. It was so easy, whereas [to sample] Therapy?, we had to go to the publishing and they wanted all this money in advance. I liked how easy it was with Ian since he owns it. His one stipulation was that as long as it isn't coming out on a major label we can use it. [Laughs.]

What were you thinking when you saw the e-mail response from him in your inbox?
[Laughs.] I was like, “Wow, this guy rocks. This guy is legit.” And it was cool. It was just really cool that he wrote back and that he was feeling the track.

Is the Fugazi reference meant to mock hypocritical activists since Fugazi always seemed to employ the DIY method with as little compromise as possible?
Yeah. I wanted to sample something political and it's kind of a parody of how people are extremely politically minded, but sometimes they're just so focused on, “Okay, we're gonna be activists,” they forget the logic of it. Like, being at Walmart with an anarchy sign doesn't really change anything. [Laughs.]

Was your drummer really concerned about keeping himself anonymous for “35 Laurel Drive”?
He didn't want his name and address put out there. He doesn't live there anymore, [but at the time] he didn't want people to Google that and say, “What's up?” to him. The conversation was real and he didn't know I was taping him, but he thought it was funny later.

Was he pissed at all when he found out you included everything in the song?
[Laughs.] He's a good sport. It was funny. He ended up cleaning his whole house and it was very beautiful after that song. [Laughs.] It inspired him.

Did you intentionally sequence “O.G. Original Gamer” after “Guitar Hero Hero”?
I didn't think that thematically, but I think it just worked in terms of the rhythm and stuff, rather than it being two video-game songs back-to-back. That was an accidental thing, I guess.

Have the people with Rock Band or Guitar Hero ever asked to use any of your songs?
They are actually interested in using “Guitar Hero Hero,” so we're just figuring out the logistics of that. But they had a good sense of humor about it. My manager works a lot of licensing with them, so it’s pretty cool. Hopefully it's gonna be in the next one, or at least as a download.

Do you think a lot of fans picked up on the Skee-Lo reference (“I Wish”) in “White Kids Aren't Hyphy”?
I don't know. I guess the kids who are my age get it. Some people don't know that song though, which is funny. It's cool. It fits with the rhyme pattern, too, so I had to pay homage to him.

After the suicide of your friend Pat Wood, would you ever consider doing something like the Take Action! Tour?
Yeah, that song ["Twenty-Three”] is very personal, and I'm trying to raise awareness about depression and suicide prevention, and something like Take Action! would be really good. I think the song is a tribute to him and it's positive to be able to do something. I'm not completely familiar with the Take Action! Tour; I met the woman who put it together a few years ago, but I've never seen it. But that would be cool.

Well, some irony there is that Hot Topic-who you took a jab at in “Hot Topic Is Not Punk Rock”-is a major sponsor of the tour.
[<[Laughs.]hat is ironic.