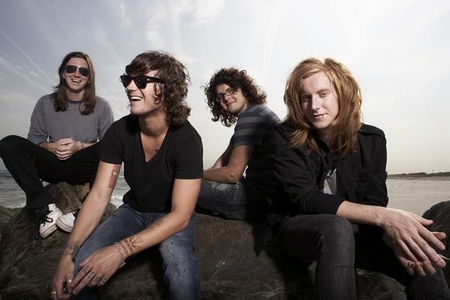 WE THE KINGS are on an emotional roller coaster. While they’re bummed they’ll be winding down the Glamour Kills Tour with their buddies All Time Low, they’re stoked that their sophomore full-length, Smile Kid, is finally set to drop next week. And although their current tour is about to end, that doesn’t mean WTK are getting any real downtime. Frontman TRAVIS CLARK tells us they’re setting out to break one of their own records next year–and it won’t be easy.

How is the Glamour Kills Tour going?
It’s great. We’re about six weeks in and have about a week and a half left. We’re at the point where everything is kind of winding down and we’re realizing that the tour is almost over. So we try to hang out and party as much as possible, but it’s so sad. We’re just trying to spend as much quality time with the other bands as possible.

When you’re out on the road for long periods of time, you kind of create this bond; it’s almost like a family. Especially when you’re touring during holidays. We spent this Thanksgiving together–like a little tour family–and it was really great. It’s one of those special things where you know you’ll probably never do it again with the same group of people. We’ve toured with All Time Low before and they’ve been good friends for a while. Hey Monday are on the same management as us, so they’re like our brother band–or sister band, I guess, because of Cassadee [Pope, vocals]. They’re our sibling band, that’s it. [Laughs.] The Friday Night Boys were the only band we had to meet. They’re still touring in a van, but they’re troopers and come hang out all the time. It’s a really good tour.

How does it feel to be a week away from the release of Smile Kid?
I’m really excited about it. The anxiety has already set in. It’s not like I’m not worried that the record will do good or bad, but I just want everybody to listen to it because I love the songs so much. I can’t wait for everybody to hear it and let us know what they think.

Besides the Secret Valentine EP last year, this will be your first new material since 2007. Has this album been two whole years in the making?
Yeah, it’s really strange for me because I have such a large amount of ADD that I feel like music should have been put out already. The Secret Valentine EP was pretty much just some of the demos that didn’t make the record. So basically this is the first real record with brand new songs. I’m excited about it. I just got the actual CD packaged and wrapped for very first time. It’s such an awesome feeling to be able to open it up and have the final product of what you spent months and months working on.

It’s cool because when people hear it, they’ll be hearing a transition. They’re going to be able to hear the songs that are a lot like the first record; there are, like, five songs that are kind of like “Check Yes Juliet” and “Skyways Avenue” and “Secret Valentine.” It’s like those songs version 2.0. You can tell I wrote them shortly after the first record came out. Then there are a couple ballads. I got in a whole ballad writing moment. Then you’ve got the new stuff like “She Takes Me High.” It’s a way more dynamic record than the first one, and that’s why I feel people will really like it. It’s a lot like a movie, where there are the upbeat, happy moments, and there are the ballads, and the climax and then a massive, epic ending. I’m really excited about it. I can’t wait for people to hear it.

How much material did you have when you went into record?
We had 10 songs done that we wanted to do. Obviously “Heaven Can Wait” had come out a little earlier. What happened was I sent demos to the label and said, “Hey, this is the new stuff I’ve been working on. Can we get in to the studio? We need to get a new record out.” The label liked “Heaven,” and they were like, “Let’s just get this out now.” So I said, “Sweet, let’s do it.” When it came time to finish up the record, I had 10 more songs that I felt really passionate about, so we recorded those songs and made them perfect. We had about 30 ideas for songs, but only had 11 songs that we truly felt passionate about putting out.

Was there anything you specifically wanted to do differently with this album?
There were actually a few things. I wanted to add a lot more instrumentation to the record. I’ve been playing piano since I was like 4 years old. On the first record, we didn’t really have time to go in and put piano in, so this time I made sure that we had time to do that. We also got to add strings and drums and percussion and stuff like that. All the little things are something that you wouldn’t typically hear from a band like us, and that’s definitely what I wanted to do to make the album more exciting.

What’s the lyrical basis of the album?
Some songs are just fantasy songs, like maybe a song about a dream I had or something that’s obviously not real–it’s about floating up in space or something. Then there are songs about things I care about. I think the overall majority, even if a song is a fantasy dreamlike song, it’s about my friends and family and people who have made me who I am. I think life experience is the best concept to write about. Everything plays its part.

Demi Lovato also makes an appearance on the album. How did you go about getting her?
She had come out and sung with us at a couple shows we had played in, like, L.A. I hit her up and said, “Hey, I have this song and I think your voice would be awesome on it.” She’s not one of those Disney singers who is just popular because she has a show and stuff like that. When I heard her sing the National Anthem for a Dallas Cowboys game, I thought she had an incredible voice. It was insane. She’s really talented and the real deal, so I sent her the song and told her to let me know what she thought. She came back and said the song gave her chills and that she’d be honored to sing on it. It’s a song called “We’ll Be A Dream”. It’s all about growing up and getting to be what you actually wanted to be as a kid. I remember when I was a kid, I wanted to be nothing more than a musician. My mom was a singer and songwriter, so I wanted to kind of be like her. So I did everything I possibly could do to make that dream come true. That’s what the song is kind of about. I knew that singing was something Demi had always wanted to do since she was a kid, too. She shares the same kind of lyrical connection I did as far as growing up and wanting to do this. She was my first pick.

What kind of response do you hope to get from the new album?
I’d love to see people being proud of who I am and who I’ve become and the music I write. I write music for myself because I love it and everything about it. I like playing music that our fans and friends and everyone who supports us can relate to. It means the world to me that people are proud of me and the music I create. It’s weird that a certain song can affect somebody enough to mean something to them and change their life in a certain way; It’s the best reaction I could ever hope for and ever imagine. There are bands I grew up listening to and specific songs that have changed my life for the better. I want to be one of those artists people look up to and think, “I’m so proud of this band for making it and putting out new records and continuing to do what they do.”

Do you have any new webisodes coming up?
We have, I think, three that are being edited right now, and we have, like, two more ideas. We have one about my sleepwalking. I used to sleepwalk when I was a kid and, well, use the bathroom everywhere. Once, I peed on our Christmas tree with all the presents under it. I was, like, 8 years old. I’ve peed in a trashcan and on a plant. I don’t really know if I sleepwalk anymore because you don’t know unless someone else is awake and sees you. Sometimes someone will tell me that I walked out of my bunk and asked them to play video games or something, they agree to and I just walk away and go back to bed. I don’t remember that. But the sleep peeing definitely ended when I was like 8. There’s also an episode where I write a really, really bad song and bring it to the guys and they all just hate it, so I throw a temper-tantrum. There’s definitely more episodes coming and we’ll post them as soon as I can.

What else do you have in store?
I know we’re going overseas. We’re one of a few bands I know of who haven’t been to Australia and Japan and South America and all those amazing places. Being able to play there would be amazing. We’ll go overseas in 2010 and obviously be on the road a lot. We’re trying to outdo our record. We did 349 shows in 2008, and this year we’re around 315 shows. We want to be able to beat 2008’s record. Sometimes we’ll play three of four shows a day with radio shows. We’ll do radio shows and morning shows, then drive and play in the afternoon and then play a late show. It’s kind of ridiculous. We’ve done five full-band shows in one day across the state of Michigan before. It was insane. I literally almost fell asleep during the last two shows; I was so drained and so tired. By the third show in, it was just like dï¿½jï¿½ vu. It got to the point where I was like, “Where am I? I feel like I’ve played this song twice in this set.” It was insane, but I would totally do it again. We haven’t done it with shows the same day across the country like All Time Low have. That would be so crazy with flight schedules and stuff. With the luck we have, we’d probably miss all our flights. [Laughs.] alt

Get DiNG skins for all of your electronics from We The Kings at the AP/DiNG Life site!