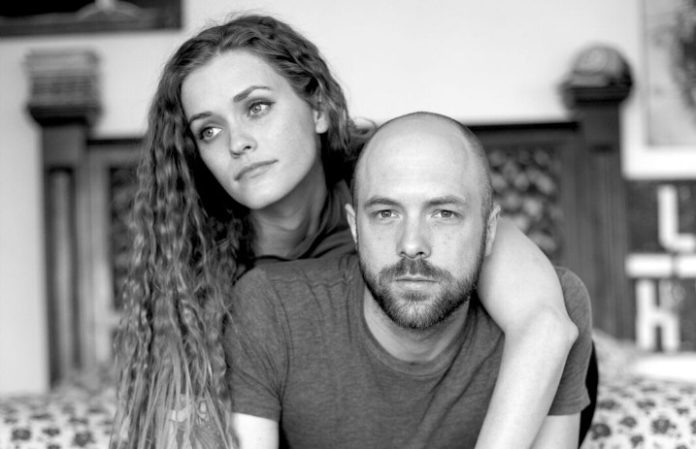 Today, we’re excited to premiere “Escape,” the first single by VadaWave, a new project from former Used guitarist Quinn Allman and singer-songwriter (and American Idol season eight contestant) Megan Joy. The husband-wife duo will be releasing their self-produced debut EP, Out Of Body, on December 9.

“Escape” tells the story of the women of the Fundamentalist Church of Jesus Christ of Latter-Day Saints (FLDS), a cult-like offshoot of the Mormon church, which practices polygamy and child marriage and whose leader, Warren Jeffs, is serving life plus 20 years in prison for sexual assault of a minor. We caught up with Allman to get the scoop on VadaWave’s origins and to learn the root of his fascination with the FLDS.

You and Megan have been married for five years. Was it always in the cards that the two of you would collaborate on something?
Since the day we met. We were introduced by John Feldmann, who you probably know from producing the Used and stuff. [Megan and I] both lived here in Utah. So we got together and our goal was to write music together.

So why wait until now?
I think there were a lot of expectations from both of us. There was a lot of pressure, I guess; it’s always been there. But then time passed and we were like, “Let’s just do something that’s fun for us.” An outlet. I’m always noodling around on the guitar and she’s always singing. It just kind of came together like that. It’s really natural.

Today you’re premiering the song “Escape,” which deals with some pretty heavy subject matter. How did you become so interested in the FLDS and the stories of those trapped within it?
We live about half a block away from where Warren Jeffs’ school was in Utah. I could literally throw a rock and hit it—it’s called Alta Academy. Before they tore it down last year, me and Megan snuck through there, and we just became obsessed with it. Escape, which is a book by [former FLDS member] Carolyn Jessop, inspired the song. Megan’s probably read it four times. Megan had those visuals, and the lyrics just came out of that.

Did you have any idea about what had happened at Alta Academy when you moved to that area?
Not exactly. It took a couple months before we really asked around. We went online and found a whole documentary—this one kid, it was his story about being raped by Warren multiple times in the basement. And we had walked through there and gone in the basement. We were sneaking through there with my camera, just holding the shutter down so it would burst flash, running down the halls—it was like a horror movie. We couldn’t shake it.

Once we started to look into it… I think when anybody looks into it, you just can’t believe it. From the surface, it’s just polygamy, there’s this blanket image. But when you get underneath it, it’s really indoctrinating and abusive and pretty horrible for the people trapped inside it.

The FLDS church is all around us. There are literally polygamists in our neighborhood. It’s not an exaggeration. We’ll be at a store and we’ll see a polygamous woman, and we both kind of look at each other like, “Wow, this is really happening!” And it’s only here [in Utah]. It’s these constant reminders.

Clearly, what went on at Alta Academy has really haunted you both. Was that what compelled you to turn the story into a song?
It was to send a message. It definitely bubbled out of our obsession with learning about all this stuff, but I think there was a switch after reading “Escape” to say, “This needs more attention.” Learning about the atrocities that are committed by religious institutions and seeing it reflected in our neighborhood, in our community, and seeing people really genuinely hurting—and being ignored. We have people in our lives, they downplay it. They’re not looking into the stories of these women, and the suffering that they go through. alt

Check out more on VadaWave here.