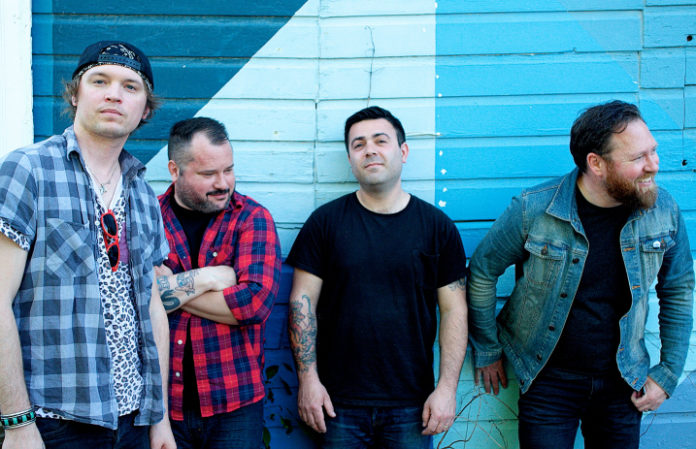 Back in May, Radar State announced their inception with a new song, and now we finally have the video for “Spinning Wheel” from their EP, out later this summer.

The Kansas City rock group may be new but features familiar faces that definitely give the band some serious street cred: Josh Berwanger (The Anniversary, Berwanger), Jim Suptic (The Get Up Kids, Blackpool Lights), Matt Pryor (The Get Up Kids, The New Amsterdams) and Adam Phillips (The Architects, The Gadjits).

Here is the album cover artwork:

AP also caught up with the band to talk about the inspiration behind “Spinning Wheel” and what they’re most looking forward to on their upcoming tour.

“Spinning Wheel” is described as being a “cry for togetherness in a divisive world.” What, specifically, inspired the lyrics for this song? How did it come about?

Jim Suptic: I think that quote sums it up pretty well. This band formed right after the presidential election, and I think the anxiousness and uncertainty a lot of people are feeling really helped inspire these lyrics. I guess it is really asking the question, ‘Now what?’

What inspired the music video for “Spinning Wheel”? Anything happen during the making of this video fans should know about?

Suptic: The video was all Josh Berwanger’s vision. It pretty much depicts a typical practice for the band. Just friends hanging out, playing loud rock ‘n’ roll! Beers may have been had to loosen the mood.

You guys are playing Riot Fest this year. Who are you most excited to see, and what can fans expect from your upcoming tour?

Septic: Well, Riot Fest will be one of our first shows, and fans can expect a good time had by all. I am most excited to see Jawbreaker. The only time I saw them was opening for Nirvana in 1993. That was a life changing concert.

Adam Phillips: I’m really looking forward to seeing a lot of the Riot Fest bands this year. I could list 90 percent of the lineup like a dolt, but instead, here are my top 10 (in no particular order): Buzzcocks, Fishbone, Peaches, X, Ministry, Wu-Tang, Bosstones, Jawbreaker (duh), QOTSA & NIN (honorable mention due to curiosity goes to Mike D DJ set).

Josh Berwanger: Looking forward to seeing That Dog, Versus, Dino Jr., and X.

The band’s record release show will be July 28 at the Riot Room in Kansas City, MO.