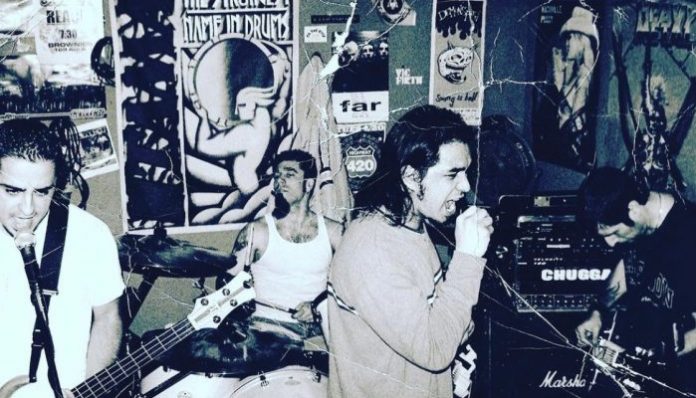 Additionally, the band made their triumphant return to the stage this past weekend, appearing at the Welcome To Rockville festival alongside artists such as Spiritbox, A Day To Remember, Korn and more.

Reach NYC, formerly known as Reach 454, formed in the musically fertile landscape of the New York hardcore scene of the mid-to-late ‘90s. After performing alongside now-legendary rock groups such as Papa Roach and System Of A Down, the band scored a major-label deal in the midst of the commercial boom behind the nü-metal genre. Releasing only their self-titled record before disbanding in 2004, the band largely disappeared from the public eye, despite leaving a sizeable impact for their fans and their esteemed peers.

However, for vocalist Rene Mata, he never strayed far from the music community, positioning himself as a powerful figure behind the scenes of the music industry as a manager, agent, tastemaker and creative director. His success in the music industry is due in large part to his incredible ability to discover fresh talent before the world takes notice and his undying love and passion for music and the community he is a part of.

As a tastemaker and supporter of the arts, Mata has helped in the discovery and signing of a wide range of acts in the music industry, from Maroon 5 to P.O.D., lovelytheband and many more.

While enjoying success behind the scenes and off the stage, Mata and Reach NYC were eventually faced with an important decision: whether or not to return to music and bring their brand of post-hardcore back to the masses. Mata had toyed with the idea of returning to the stage a few years prior after being encouraged by his best friend, vocalist Chester Bennington of Linkin Park, to perform again and create new music. As many of us know, Bennington sadly passed away in 2017 from suicide.

Following this heartbreaking tragedy, Mata admits that he fell into serious depression, resulting in relapse after 25 years of sobriety. After attending Zoom meetings during the pandemic, Mata is clean and sober again. Miraculously, Mata and the band made the decision to reunite after a nearly two-decades-long hiatus as a means to honor their fallen friends, including Bennington, and to write heartfelt songs about picking up the pieces after tragedy and finding hope through the darkness.

With their latest single “Last Surrender (Remix),” Reach NYC have returned with an anthemic rock song. It includes soaring hooks and introspective lyrics dealing with the struggles of substance misuse but finding hope to pull yourself out. The song is important on so many levels, as many people across the world find themselves in the midst of addiction. One of the most powerful things about music is that it can offer a place of solace and therapy for listeners who may need it the most.

Accompanying the song is a visual that contains sci-fi elements and images of space and the planet Earth. Directed by Boy Epic, the video constantly keeps up with the song’s high intensity and energy with quick cuts of satellites, abstract imagery and satellites in orbit. The visual is a perfect complement to the song in that it feels like it is constantly rising and reaching for the stars, both thematically and sonically.

We sat down with Mata for an in-depth look at the reunion of Reach NYC, his relationship with Bennington of Linkin Park, his incredible journey through the music scene both on and off the stage and more.

What made you decide to reunite the band after 15 years of being away? In addition, what caused you to change the band name from Reach 454 to Reach NYC?

This is always hard to talk about. My best friend killed himself in 2017. His name was Chester Bennington, who was the singer for Linkin Park. He was my best friend in the world. I was depressed for so many years after this. In 2019, my friends in P.O.D. asked me to open a few shows for them, and that was the first time we performed in over 15 years. Chester also always wanted me to play music again.

The last dinner we had together was at this old-school Italian restaurant in New York. We were joined by Jacoby Shaddix from Papa Roach, Marcos [Curiel] from P.O.D., Matt Sorum and a few others. Chester had this idea of playing humungous places in the next year with the plan to have Linkin Park, Korn, System Of A Down, Papa Roach, Deftones and Reach NYC open. He always said he was the biggest Reach fan.

We changed our name to Reach NYC because we were always known as Reach from NYC. I remember one time being onstage in Boston back in the day, yelling “We’re Reach from the NYC!” and 30 dudes ended up giving me the finger, so I jumped out in the crowd and close-lined some guy, and the next thing I know, everyone’s dancing around me. [Laughs]. I do this now because I want to memorialize my friend Chester and get to say, “All right man, I’m gonna do this.”

The song is basically about after being 25 years sober, I lost two of my best friends, one to suicide and the other to drug addiction, and I ended up relapsing. I got Mixi from Stitched Up Heart to be on the song because she’s also in recovery herself and was just the right person for the song. I love her voice. The video for the song is supposed to represent the feeling of your soul being lost.

Your previous single “Back From The Dead” also features Jacoby Shaddix from Papa Roach. What was it like getting to reconnect with him musically?

Papa Roach actually opened up for us at [legendary punk venue] CBGB in 2000. He is one of my best friends in the world. It’s crazy because we all grew up loving hardcore and have a lot of history.

What was it like in the early 2000s when the band signed a massive major-label deal during the height of the hard-rock music scene when it became successful in the mainstream, and how does it compare to the industry now?

We got a big deal back then. My recording budget was open-ended and whatever I wanted it to be. We were signed by legendary record executive Jason Flom. We got turned down by every label beforehand, but thankfully Matt Pinfield would play us all the time on K-Rock radio. Before we even signed the record contract, Jason Flom called me and was like “I got your plane tickets to L.A. You’re doing the record with Jay Baumgardner [Drowning Pool, Papa Roach].” We didn’t become big rock stars, but were just so grateful that we got to have a good time, and we are still enjoying everything and soaking it in.

What was it like playing shows during this era?

Our first big show was Warped Tour 1999. We played right after Agnostic Front, and then Eminem went on. It was insane. We eventually got to play some huge shows. We got to open up for Cypress Hill in New York. They were one of my favorite bands, and in general, I was just so lucky to play so many awesome shows.

As an outsider looking in at the New York scene, it has always seemed like there was such a family aspect to everything and a camaraderie. Would you agree?

A lot of us come from working-class families. We don’t take things for granted. We’d work all day and play CBGB at night. In general, this reunion of the band continues that [it’s] about love and trying to bring some good vibes back into the world.

Obviously, you’ve worked in music management and have helped so many now-iconic bands secure record deals. How did you always have your finger on the pulse of the music scene and have the ability to discover talent?

Straight up, one of the first bands I ever got a record deal for was this band called Kara’s Flowers. They ended up changing their name when they got signed and are now known as Maroon 5. I remember pitching them as “a bunch of good-looking white boys playing Stevie Wonder meets Jamiroquai.” Let me just say I made 1,500 bucks and made a lot of other people multimillionaires. [Laughs.]

Are there any current artists that you are excited about and think are about to blow up?

During COVID, I got about 11 bands signed. I am really excited about this artist DEVORA. She’s like my little sister. I love her music, and her new stuff is going to be amazing.

How has it felt being back onstage after so many years, playing with legendary peers and playing these massive festivals?

When we were onstage recently opening for Quicksand. I literally choked up and said, “We’ve been playing shows in New York City everywhere, and we still never take it for granted.” Through music, we made lifelong friends, and I would have never made these friendships without my love for music. It just brings people together.

Check out the new music video for “Last Surrender (Remix)” below.