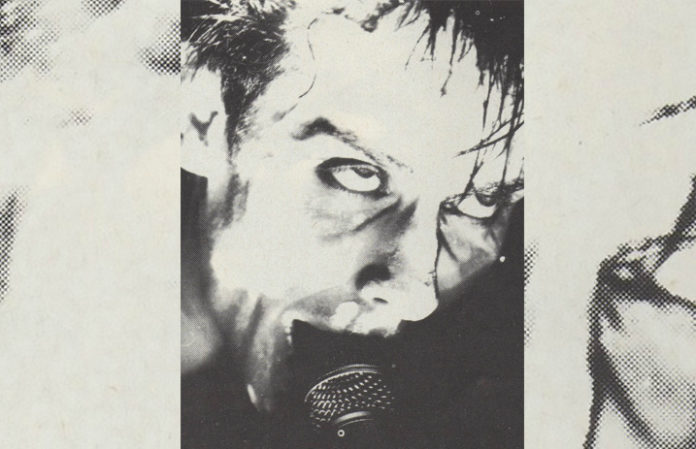 Post-punk/gothic rock icons BAUHAUS are the subject of a massively comprehensive book, Bauhaus Undead: The Visual History And Legacy Of Bauhaus. Drummer Kevin Haskins conceived, wrote and compiled the massive tome, filled with his memories of significant incidents in the band’s storied career, a plethora of previously unpublished photos of the band in the studio and on the road, original show fliers that capture the band’s groundbreaking aesthetic, as well as other visual treats pulled from fanzines and Haskins’ personal collection. Bauhaus—Haskins, frontman Peter Murphy, guitarist Daniel Ash and bassist (and Haskins’ brother) David J—were key architects of the original post-punk movement, and icons at the ground floor of the gothic scene, which continues to flourish to this day, infiltrating everything from other musical genres to fashion and visual art.

But Haskins’ work is more than just a band scrapbook. Even if you weren’t a fan of the band, Bauhaus Undead offers a glimpse of what was going on in the late-’70s/early ’80s underground. There are striking designs for fliers, pins and shirts that stand on their own artistic merit. And then there are the stories. AP is stoked to reveal this exclusive excerpt from Haskins’ book. What follows is his fond remembrance of having their first record, the 12-inch single (and signature song)  “Bela Lugosi’s Dead,” released by Small Wonder, the indie label formed by the East London record store of the same name.

Slated for release Nov. 1, preorders for Bauhaus Undead: The Visual History And Legacy Of Bauhaus can be made here.

After recording “Bela Lugosi’s Dead,” we knew we had created something very, very special! Unfortunately, or fortunately, with regards to most of the record labels that we approached, the feeling wasn't mutual. Daniel visited practically every major label in London and was met with, “I really like this, it's the sort of thing that I listen to at home, but it's not commercial enough.” And, “We can't release this, it's way too long for a single!” Undeterred, we turned our attention to the indie labels and, at first, didn't have much joy there also. Chris Parry at Fiction (then home to the Cure) stated, “Although it has its interesting bits, I found ‘Bela Lugosi’s Dead’ a bit too introverted and overlong.”

Thankfully, there was one individual named Pete Stennett at Small Wonder Records who got it. Pete Stennett is a lovely chap, who ran his label from his small record store in Walthamstow, East London. He was a little older than us, with a mischievous smile and blond hair that protruded from under the ever-present beanie.

Every spare surface in his store was festooned with 7-inch picture sleeves, stickers and promotional posters, complemented by homemade record bins. In the front window was hidden a large bag of weed, behind a life-sized cardboard cutout of Elvis Costello. Pete figured that that would be the last place that the cops would look! The label was home to Crass, the Cravats, Patrik Fitzgerald, the Cure, Poison Girls, Angelic Upstarts and many other fine bands.

We have to thank Colin Faver—or Cos as he was known—for introducing us to Pete Stennett. Cos worked at Small Wonder on Saturdays and during the week he was DJ’ing and promoting shows under the name, “Final Solution.” He went on to have a notable career starting KissFM and four decades as a world renowned DJ. We ran into Cos at one of his events and gave him an acetate of “Bela” which he passed on to Pete the following Saturday.

Consequently, Pete invited us down to meet with him at his record store in East London and on our arrival, put on the kettle to make a strong pot of tea. We chatted for a while and then he informed us that he needed to listen to “Bela” just one more time to make up his mind. I don't know if he was playing games and had already made his decision, or if he actually did need one more listen! He placed the needle on the acetate of “Bela” and standing amongst the record bins, we listened with cautious confidence. The single, clocking in at 9 minutes 37 seconds, felt more like nine decades! Finally, the final kick drum punctuated the end of the record and we all looked at Pete with eager anticipation. There was a pause, an almost indiscernible slight nod of the head, and then Pete said, “Yes, I'd like to release it!” A rush of adrenalin coursed through my veins, and it felt like a phosphorescent display of fireworks were going off inside my head! He was going to release it!! A record label (and a fine one at that) was actually going to release one of our songs! Being typically British, we all politely thanked him, suppressing the absolute joy and excitement we felt inside, but once outside of the store, we ran down Hoe Street whooping, hollering and leaping for joy, like little kids who just got off school for the summer holidays.

When we received the first pressing in the mail, I will never forget pulling out the the 12 inches of vinyl and examining every groove. I had to keep checking the inner circle to see if our name was still there, believing that I had somehow got it all wrong, and that this was in fact a record by another band. This was another beautiful and magical benchmark moment.