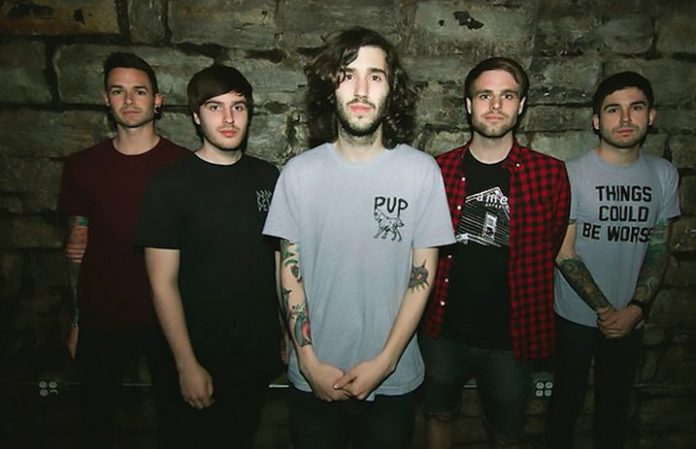 It’s been a breakthrough year for Chicago-area pop-punks Real Friends, but as fall begins, the band aren’t showing any sign of slowing down. As they prepare to head out on the AP Tour with Mayday Parade, we caught up with frontman Dan Lambton to chat about his guest spot on Mayday’s new album and to get the scoop on what Real Friends have in store for their next album, due in 2016.

You’re in the middle of a little time off before the AP Tour. Lucky for you, Riot Fest Chicago was in your backyard.

DAN LAMBTON: Yeah, we’ve been home for a little over a month. [Riot Fest] was sick! We played early, we played second or third on that stage. We had it out of the way right then and there, first day, so then we had the weekend.

You also joined Mayday Parade to do your guest vocal on “One Of Them Will Destroy The Other.” I was talking to Derek Sanders from Mayday, and he was telling me that when they first decided they wanted you to sing on the track, they weren’t sure how they wanted to use you.

Yeah, I recorded the entire song. Derek originally had an idea where he wanted it to be back-and-forth the entire song. Which, in my opinion, is really cool. It obviously didn’t end up working out, but we recorded it that way. I think that song came out awesome.

Did you actually drop by the church in upstate New York where Mayday Parade were recording to cut your vocal?

It actually worked out perfect. We had an off day when we were out with the Maine and Knuckle Puck back in the spring while they were recording, so we just stopped at the studio on our way. We all chilled; everybody hung out with Mayday Parade while I tracked the vocals. And then, when they shot the video, we were getting back from doing Japan, Australia and Hawaii. We originally had a day off after the [Hawaii] show, so I just flew to LA that day, and the day after that filmed the video. So everything with the song just worked out perfectly with my schedule.

In the meantime, when you’re not working on the album, you’re gaming, at least if your Twitter is to be believed. What are you playing right now?

Bloodborne is one of my favorite games ever. It came out for Playstation 4 this March, and it has influenced how I look at all of my other gaming—and even my writing, in a sense. The game just kind of drops you in the world, and every single piece of information about the lore in that game, none of it is handed to you. You’re not a little kid, you’re not playing Mario anymore, you’re not playing Zelda anymore. You’re grown up. You’re thrown in the real world, and you’ve got to figure this shit out for yourself. They leave a lot of blank areas for you to put in your theories on the story. Some of the theories are super-wrong, and some are like, “Oh, we didn’t give you enough information,” so you fill in the blanks.

I think that that’s a perfect comparison to music. I’m using that influence to have all of these little hidden things, all of these different things going on. I want to go in and record little tiny guitar things that people will hear in the background, just have all of these things for people to explore. I think, the last record, we focused more on dynamics and how songs can create a landscape. This time, we’re adding to that picture—the depth of it, the detail of it.