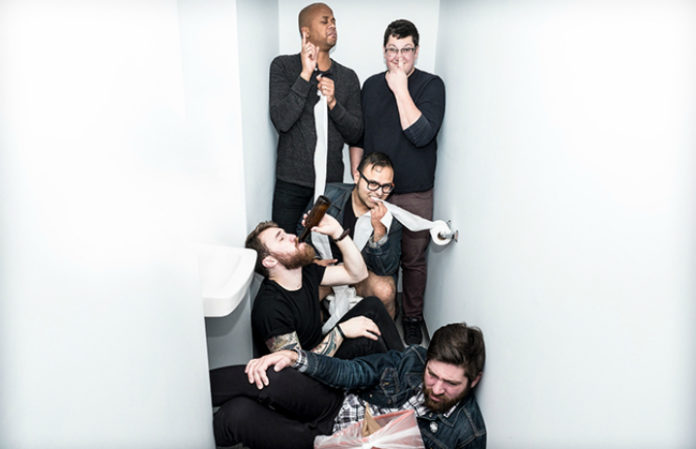 Boston-based punks Rebuilder are exclusively premiering their new EP, Sounds From The Massachusetts Turnpike, set to be released this Friday, Sept. 1, via Panic State Records.

In comparison to their last release, Rock And Roll In America, guitarist/vocalist Sal Medrano explains that at points, it might feel less aggressive than their previous release. However, they don't want to feel pigeonholed, and with the exploration, they were able to create a release that is both an homage to their home state—and reminds people that it's okay not to be okay.

Stream Rebuilder's full EP here, and read our Q&A with Medrano below.

And read our Q&A with Medrano here:

Your new EP pays homage to your home state of Massachusetts. Why did you decide on this as a focus—and how has your home state influenced your music?
I saw artwork from an old postcard that said “Greetings from The Massachusetts Turnpike.” It made me think about how revolutionary the Mass Pike highway system must of been at the time for postcards to be made. Sending them them to friends, boasting about the highway. It’s probably similar how we put  a lot of work into this piece of music and once it’s done we want to tell everyone about it. We used that old postcard as a reference to our album artwork.

Boston has influenced our music on a huge level. We have a great music scene that doesn’t get spoken about enough. Going to shows and seeing your friends play in some of the best bands you’ve ever heard, (Save Ends, Actor Observer, Warning Shots, Dan Webb, Loser’s Circle, OC45, Vaulted, etc) makes you want to always get better. We just did a run with Choke Up. Seeing them play every night was awesome. They have a new record called Stormy Blue. We are doing a joint record release show. It meant a lot to us doing all of this together. We have a solidarity that is rarely seen anymore. That’s was important for us, especially with a record that does focus so much on our home.

What were your thoughts as you were putting Sounds From The Massachusetts Turnpike together? What were your goals for the final product?
We wanted to follow up “RNRIA” with something progressive but not completely out of context. We recorded with Jay Maas at Getaway, who did the last record, and used the same about of time for an EP as we did the full-length. We didn’t want to rush things too much and make sure we are happy with what we are presenting. We also wanted it to feel similar to how we play live. We tracked guitars in the same room so that we could get natural feedback and organic sounds. We did a whole day of keys & piano, trying different sounds and textures.

Rebuilder are known for shaking things up and refusing to follow the rules. How did that mindset play into this release? Is there anything unexpected on this release that you were excited about—and fans maybe won't totally expect?
We don’t allow ourselves to be pigeonholed into a set sound. The songs for this EP at first felt at times less aggressive than songs from RNRIA. It would of felt weird to change the songs to be purposefully more “punk”. Once we started practicing the songs and playing them out more, they felt just as heavy if not heavier than some of the existing songs we have done in the past. I think our audience will feel the same once they hear it. I’m excited to see what people think of it. Maybe they won’t expect the handclaps, bass drops, and vibraslap on rock and roll songs.

You mentioned trying to follow up Rock And Roll In America knowing “the whole country has gone to shit,” saying “the only thing that can save us” is rock & roll. What are your thoughts on the relevance of music in this politically tumultuous time?
If you look at our country during hostile times, music has always been there for people. For an audience it’s there as a support system. Songs are able to express your feelings better than you can. As a musician you have a platform to express your opinions to a whole community of people. It’s always been important and will continue to be. Currently, it feels very reassuring to see lots of bands welcoming people who need support to reach out and know they are not alone. This might be a time where people not into punk rock, discover punk rock and find comfort in it.

If there's a message you want fans to take from this EP, what would you want that to be?
The message is, life can be dark at times but there is always a light. No matter how hard it gets, you will always have hope and friends by your side. If it doesn’t feel that way please tell someone and don’t feel you need to carry the burden alone.

Rebuilder's EP is currently available for preorder here. Check out the tracklisting below:

What are your thoughts on Rebuilder's Sounds From The Massachusetts Turnpike? Let us know in the comments below!