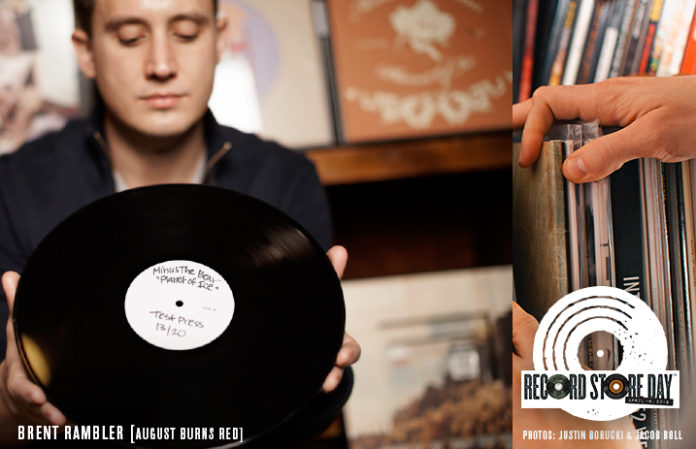 You’ve heard from all your friends (and several of your fave artists!) that vinyl is the thing right now, but where do you even start? In honor of Record Store Day, we’ve got a three-part series that will walk you through everything from terminology (Why do I even care if it’s “hand-numbered”?) to technology (So what’s the issue with Crosley turntables?). Needles at the ready!

Vinyl is a beautiful thing. Grooved-wax music discs have transcended generations and successfully managed a full-blown resurrection. So much so that in 2015 the sale of vinyl EPs and LPs rose 32 percent to $416 million, according to the RIAA—that’s the highest they’ve been since 1988. Besides nostalgia or that analog music “sounds better,” I argue that this retro reincarnate is an inadvertent response to illegally downloading music. When people realized that record collecting was cool, bands suddenly had a more substantial piece of art to offer, an itch that could not digitally be scratched. For those of you who are a bit late to the game—no judgment, but let’s catch you up.

The first thing to remember about owning a record collection is that it’s not like having an iPod with gigabytes and hours of music at your fingertips. What you got is what you got, until you get out to the record store or the mail blesses you with that order you made literally forever ago. Get records that you love enough to listen to on repeat, because you are going to have to.

Raid your family’s basement. Grandparents, aunts, uncles—they all had some records growing up, so where are they now? These are the questions you need to be asking. There are usually some hiding away in storage—unless they were tragically claimed by a basement flood or your dad sold them all off in the Kijiji rush of ’09.

Where you buy records also is important. It’s always best to buy directly from the band when possible, whether you’re going to see them live or ordering off of their personal Bandcamp. Just like festival merch tents, merch websites need to take a cut, which leads to higher prices. The record label’s website would be the next best online source.

When in doubt, support your local record shops! Sure you can buy music at HMV and Urban Outfitters, but when you buy from a small shop you’re supporting a local business and a local family. Yeah, the person behind the counter might look intimidating and grouchy, but I guarantee if you start asking them questions they’ll bloom like a wrinkly,  tattooed flower. Usually you can put in a request for something and they’ll order it in for you—plus you never know what kind of odd gem you’ll find lying on the shelves. Bury me in my favorite record store when I die.

Don’t get caught up with which pressing you are buying. Records get pressed, and when they sell out the label will make a second pressing. Intermediate collectors will pay heaps of money for originals—for example, before they repressed it my buddy paid over $400 for a first pressing of Brand New’s Deja Entendu. It did make for a surreal listen. Often labels and bands will do limited colored pressings, maybe for a tour or special distributor (like Hot Topic), which can be a fun memento to pick up. However, there usually isn’t much difference in the pressings, so if you’re just starting out give your wallet a break and go for the cheapest available option.

Next up: turntables. Check back for everything you need to know about setting up a beginner stereo.