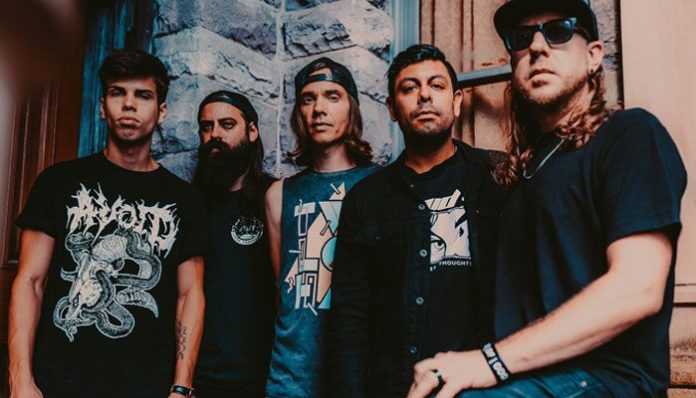 The Red Jumpsuit Apparatus are trying to make sense of a crazy time in history. And they’re paying the gesture forward. Today Alternative Press is premiering the official video for their latest single, “Is This The Real World.” The song cautions against the insidious proliferation of augmented reality and fake news, further exacerbated by an election year.

The song comes from the band’s latest release, The Emergency EP, an effort that’s marking a number of firsts for the band. From the new electronic flourishes that color the record to the green-screen technology that aids in the socially distanced video, RJA are adapting to what the real world is throwing at them.

Frontman Ronnie Winter discusses the creation of the song, the message behind it and what it takes to make a socially distanced video.

“Is This The Real World” is one of my favorite tracks off the record. The programing flourishes are really urgent. Everything is really strong out of the box, and you’ve got that overmodulated screamo vibe happening in the bridge. It’s a different route for Red Jumpsuit Apparatus.

I remember the day I heard this. I was backstage in Australia three years ago, and they were working on something outside of the band. John [Espy, drummer] and Josh [Burke, guitarist] were writing in the back [of the bus], just trying some stuff on their own. There were no vocals. I only had the music, but I loved it. They didn’t give [the song] to me right away. I think they were going to try out other singers, which I supported. I even suggested a few. Then they finally handed me over the track. Because they knew I was going to chop it all up as a producer. But I loved it, and they loved the final product.

Nobody got on social media and said, “Ronnie screwed up my song, and I hate him.” Congratulations.

I know, right? I am super-cautious about telling musicians, “If [what I’m doing] completely rips your heart out, let me know. Because I know how that can feel, and it happened to me in the past.” Luckily, they liked all my ideas right away. So it was pretty smooth, but it was a risk. I warned them before, “Hey, when I change this around, it might make you feel funny on the inside.” But they actually said they wound up liking it better. So that’s the best compliment you can get. I think they had given up on thinking that [the song] could work for Jumpsuit. I am the final say on that, so I’m glad they finally gave it to me.

How complex was it to shoot the video?

We’re still in a COVID era, and there’s a lot of debate about that every day. Is it real, or is it not real? That’s all everybody talks about. John and I filmed social distanced, all that stuff here privately in L.A. We had a very small crew, the smallest crew I’ve ever shot a video on. And we actually documented all that to just make sure we are all good. We didn’t tell a lot of people. I didn’t want to fly to meet the guys because I didn’t want to risk anything happening at the airport.

So for the first time in the Red Jumpsuit Apparatus’ career, we shot a video separately. Four of the guys were filmed on a green screen in Florida. It’s the first video we’d done in quarantine, separated. It was really intimidating because Red Jumpsuit are a punk band. We’re used to really just jamming in front of the camera. We don’t really have a whole lot of alternate ways that we like to look or act. There was never a time when we were all standing next to each other. [The process] was a little different and a little scary. But I’m really happy with it.

The song itself is about the insidiousness of augmented reality and the proliferation of fake news.

The video starts with a simple message: Be careful what you see because what you believe can change you on the inside. We believe that’s what’s happening through manipulated media and augmented reality. Which is then turned into variations of false information times a million. We’re just encouraging people to keep a level head, question what you see and verify the source before you go making decisions about your family or relatives that will affect people’s lives. Everybody has heard the stories about misdirected extremism. That’s really what we’re trying to keep people aware of without glorifying the people that we’re talking about. Because if we name them and give them credit, we’re giving them fame.

Check out “Is This The Real World” below.