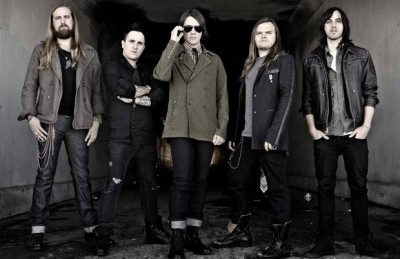 The Red Jumpsuit Apparatus’ new album, Am I The Enemy, is due August 23 via a partnership with Collective Sounds, the new label created by management/media company the Collective. The John Feldmann-produced album contains twelve songs, including the already-released “Reap” and recently-revealed song “Salvation.” The band will be on tour throughout June and July; the entire list of tour dates is below.

AP is also proud to announce that RJA lead singer Ronnie Winter is Altpress.com’s newest columnist. In the following note, Winter explains what he’s going to be writing about in the very near future:

It's 5:27 AM and once again I can't sleep so I put on some ADTR and have given up on rest for now. Thoughts of the coming day's engagements are my company. I have two separate recording sessions, yard work to do, a two-hour band rehearsal, an article to write and a month’s worth of laundry to wash before we hit the road again. Busy is good.

Altpress.com and I have teamed up to start a new column about being an independent artist in today's music scene. This column is directly geared towards musicians and artists, both unsigned and independently signed as well. I have actually been on both sides of the mirror – starting with recording and releasing music on my own since 1999, to signing to a major label in 2005, to leaving that label in 2010, to currently co-running my own independent label with Collective Sounds and working with some up-and-coming bands that I've spotted along the way. There are a lot of things that I didn't know enough about in the beginning that would have helped quite a bit in those early years, and I want to share that wealth of knowledge with you and help show true musicians how to get started towards the dream. What is the dream? I'm sure it's different for everyone but for me and most people who will be following this column, the dream is simple: to write/record/release/perform your music for a living and be able to pay the bills. Maybe even get DirectTV with the movie channel package if you’re lucky. The simple truth is that it's an amazing time to be an independent artist, and there are a lot of companies and organizations both physical and online that are there to help you get on your way.

Over the next couple of weeks/months I will be breaking down what these guys can and can't do for you. Some of these initial steps will be obvious to veterans at first—but keep in mind not all musicians are on the same level of awareness. So, as we progress, we'll get deeper into what steps you can take based on your situation. I am also eager to hear and learn from you, and will be answering direct questions as well. Stay tuned to Altpress.com for further details…