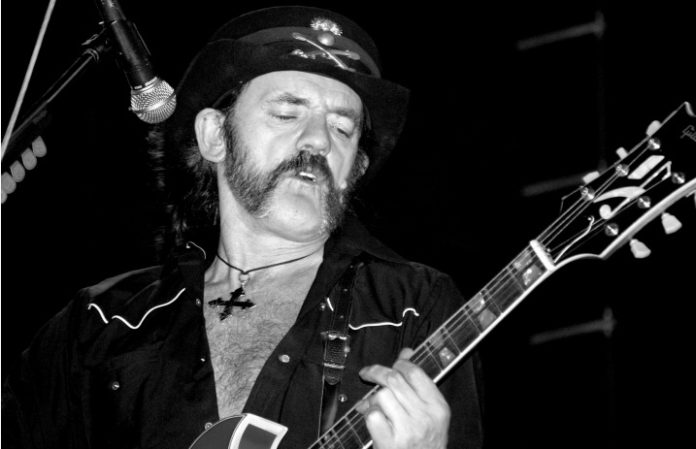 The stories of the English icon’s days as a roadie for Jimi Hendrix, an early member of Hawkwind, an architect of the new wave of British heavy metal and the hardest partier to ever walk this planet are the stuff of legend, and are chronicled in documentaries like Lemmy and Channel 4’s Motörhead – Live Fast, Die Old.

But Lemmy wasn’t just the guy from Motörhead. To some, he was a god. From sitcoms on both sides of the pond to snack food commercials, here are 10 lesser-known—but no less badass—incarnations of the dear and departed legend.

The seventh episode of England’s cult comedy The Young Ones, “Bambi,” was many Americans first exposure to Motörhead. MTV rebroadcast the surrealist comic adventures of four undergrad flatmates for stateside audiences in the mid-80s. This episode featured Motörhead playing “Ace Of Spades” in the guys’ living room.

The English black comedy Eat The Rich featured the Motörhead song of the same name and a badass cameo appearance from Lemmy as the altogether Lemmy-like “Doctor Rock.” The movie costarred the late Rick Mayall from The Young Ones, with appearances from other rockers like Paul McCartney, Shane MacGowan (the Pogues) and Bill Wyman (the Rolling Stones).

In the most memorable scene from the otherwise forgettable comedy Airheads, about a group of “metalheads” who take over a radio station, the dimwitted heroes test a suspected undercover cop (the late Harold Ramis of Ghostbusters fame) with some trivia. “Who’d win in a wrestling match, Lemmy or God?” asks Chazz (Brendon Fraser). “Trick question!” declares Rex (Steve Buscemi). “Lemmy is God!” Lemmy himself cameos in another of the film’s scenes, though there isn’t any divinity or wrestling in his appearance.

A teenaged Lars Ulrich followed Motörhead around on an English tour, cementing the dreams of rock stardom that would lead him to cofound the biggest heavy-metal band in history. Metallica have never been shy about their influences, going out of their way time and time again to shine a light on the bands they grew up listening to. For Lemmy’s 50th birthday party, Metallica played an entire set of Motörhead songs dressed up as “The Lemmys.” A decade later, Motörhead won their first and only Grammy—for their version of a Metallica song.

The Drew Carey Show once featured Slash (Guns N’ Roses), Dave Mustaine (Megadeth) and Joe Walsh (the Eagles) in the same episode, but nothing, of course, topped the time Motörhead played in his character’s bedroom. In the season seven episode “Drew Gets Out Of The Nuthouse,” Mimi (Kathy Kinney) wakes Carey via an apologetic duet with Motörhead in a scene recalling the band’s surrealist appearance on The Young Ones nearly two decades prior.

The Sex Pistols sneering frontman Johnny “Rotten” Lydon once made a commercial for butter, so who can blame Lemmy for getting in on the action? This bizarre (and awesome) commercial for Kit Kat features a handful of British celebs (the candy originated in England). Lemmy is wearing a tuxedo and playing a violin because, well, why shouldn’t he be? And this wasn’t the only “telly advert” to feature Motörhead’s frontman. There’s also one for Walkers Crisps, or as they’d be known in America, Walkers potato chips.

The rock ’n’ roll autobiography is nothing new and there are plenty among them filled with all sorts of debauchery of the real, exaggerated and completely imagined kind. There was no dancing around Lemmy’s lifelong obsession with Jack & Coke and amphetamines when he called his book White Line Fever (after his own ’77 single, of course). It was all right there, as naked and raw as his uncompromising rasp, irresistible charisma and brilliantly distorted bass tone.

A little over 10 years ago, Dave Grohl decided to make a heavy-metal album and called upon each of his genre heroes to collaborate with him, because he’s Dave Grohl, and he can do that. Each track on the one-off album from Probot featured different hard rock and metal legends, including guys from Venom, Sepultura, Cathedral, Celtic Frost, Voivod and, um, Jack Black. But only one song received the music video treatment and that, of course, was the one with Lemmy singing and playing bass. Doom icon Scott “Wino” Weinrich appears in the video, as well.

Let’s let Lemmy describe the problem with his action figure as only Lemmy could. “I had to stand on this platform while the camera went around and did the hologram thing and then they made the model, only smaller,” he told Artisan News Service in 2008. “They said it's an action figure, and I said, 'So, you're gonna put a dick on it?' They said, 'No.' I said, 'Well, then it's not going to get much action then, is it?' A bad name for it, right?”