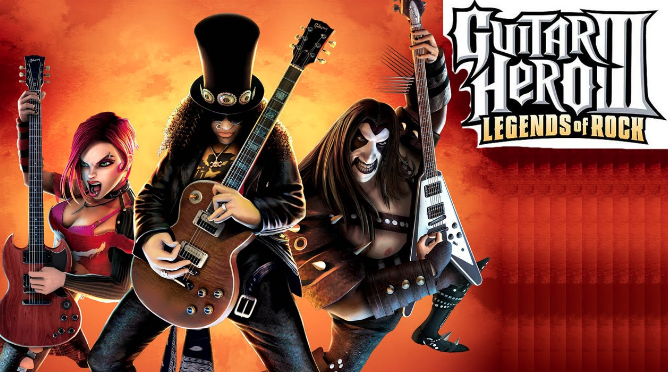 Can you believe it's been 10 YEARS since the Guitar Hero franchise blessed us with the single most iconic music playthrough game (sorry, Rock Band) of the modern era?

If you somehow aren't familiar, Guitar Hero III found you as the guitarist of an up-and-coming (cover?) band with a very impressive and, um, eclectic repertoire.

There's no doubting the impact of this game—Activision says it was the first video game to accrue over a billion dollars in sales, and we believe it. Seriously, the best part of 2007 was pretending that you knew these songs before Guitar Hero. It's okay, we won't tell your secret.

Today, we remember some of the most iconic songs of the game, from “Slow Ride” to “Through The Fire And The Flames.” Let's take a trip back through time…

If you're playing in career mode, this is where you got your start, making it one of the most memorable guitar parts in the game—especially if you were playing on the hard level for the first time and simply couldn't pass this song, so you had to try it over…and over… Memories!

Nothing like a little female representation! Seriously, upon reflection, this might be the only song by a woman in the game. But what a banger.

“Bulls On Parade” by Rage Against The Machine

Wow, remember when you beat Tom Morello in a guitar battle? At his own song? Way to go.

“When You Were Young” by the Killers

A great song in its own right! But would it have been as popular if it hadn't been on THE MOST ICONIC VIDEO GAME OF THE DECADE? You decide.

This one was definitely a treat for fans who were already very into AFI's most iconic single. Relive the fun:

“Paint It Black” by the Rolling Stones

This song seems so tame, but it was SO HARD. But we still remember it fondly.

“The Metal” by Tenacious D

Wow. Do you remember the first time you heard this song and just had to take a moment to process it? Also, do you think putting it on Guitar Hero is what finally killed the metal?

“Knights Of Cydonia” by Muse

Full disclosure: I was 11 when this game came out, and this song scared the shit out of me, so I avoided it at all costs. And maybe for good reason, since it's been said that this is the hardest song in the main setlist.

“The Devil Went Down To Georgia” by Steve Ouimette

Not another battle!! How often do guitar battles really happen? We also kind of wish there was a Fiddle Hero.

“Through The Fire And The Flames” by DragonForce

Ah, yes. The crown jewel. The spoils of victory. Thank god this was an unscored song you just played for fun at the end of career mode. Did you actually try playing this one? How did you do? And is this playthrough even real?

That's all we've got! Did we miss your favorite? Let us know in the comments!