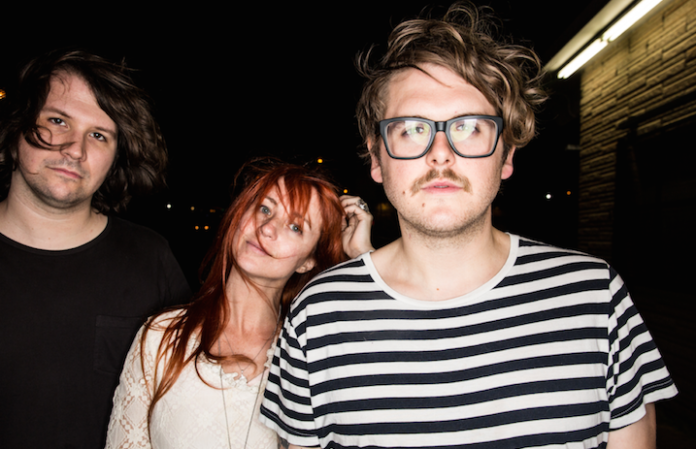 There’s something addicting about *repeat repeat. Maybe it’s the high-energy “Plugged In” that almost gives you a runner’s high just by listening to it. Or maybe it’s the perfect concoction of surf, rock and pop that make their tracks so sticky sweet and irresistible.

Hailing from Nashville, Tennessee and signed to Dangerbird Records, *repeat repeat are relatively new to the scene, kicking off their career in 2014 with their debut album Bad Latitude. And now, three years later, the three-piece have not only made huge festival appearances this year (Firefly Festival and Forecastle Festival), but they’re also close to dropping their new album, Floral Canyon, on September 15.

Now that you have some background on the up-and-coming band, get to know “your favorite band’s favorite band” a little better. But before you read our Q&A with frontman Jared Corder, drummer Andy Herrin and vocalist/keys player Kristyn Corder — where they discuss everything from how their name came about (hint: it has something to do with a shampoo bottle) to their podcast “*repeat repeat podcast podcast” (yes, they have their own podcast; how impressive is that?) — click play on their new single “Girlfriend,” streaming exclusively on AP.

How did the name *repeat repeat come about?
Jared Corder: It actually came from a shampoo bottle. It said “Lather, Rinse*” and at the bottom “*repeat, repeat.” In the beginning of the band, we used the asterisk and the comma, but too much punctuation makes your band look like assholes, so we dropped the comma. Unintentionally, the asterisk helps us get top listed on shows and lineups.

Your Twitter bio says: “Your favorite band’s favorite band.” Who are your favorite bands right now?
Kristyn Corder: These days we love Broncho, the Raveonettes, Beach Slang, Mother Mother, Cage The Elephant, Kreeps, Thee Oh Sees, The Vaccines, Francoise Hardy, the Asteroids Galaxy Tour, Temples, Tame Impala, Andy Shauf. The list is lengthy, for sure. We keep a playlist on Spotify of stuff we like.

How did you meet?
Jared Corder: Kristyn and I were engaged when I formed the band. We met at a show where I was dressed as Tom Cruise circa Risky Business and wasn't wearing pants. Andy [Herrin] and I met while working at a record store together, and was wearing pants. Andy and I started working on some songs while looking for a female vocalist, and Kristyn (who never planned on being in a band) sang on the demos. Our producer heard her voice on the demos and told us we had found our girl singer.

Describe your live shows with one GIF.

If you could tour with anyone at all, who would it be and why?
Kristyn Corder: The Arctic Monkeys, for several reasons: We like their music. We admire their career trajectory and ability to remain themselves even with big crossover successes. Also because we've always felt our particular sound might work well touring abroad.

You have a podcast called the *repeat repeat podcast podcast. Why did you decide to start your own podcast and what do you love about it?
Jared Corder: Since the band formed, we had been making friends with a bunch of bands that were starting to blow up and get bigger. It was such an interesting and fun transformation to watch, and we wanted to capture our friends on that journey. The podcast also gave us actual time to hangout with our friends between ours (and their) busy touring schedules. We listen to podcasts all the time, and there are a ton of really silly ones and a bunch of serious interview podcasts, and we wanted to do one where it just felt like friends hanging out, drinking and talking about whatever the hell we want.

Which band/artist would you love to have on your podcast and what would you ask him/her/them?
Andy Herrin: Howard Stern. He's a radio guy, obviously, but he was also in bands when he was a kid. I'd have him on. Dude does it all and has lasted over 40 years in the industry. I'd ask him a ton of questions about that, but at the end I'd have one final question for him: I'd ask him if the *repeat repeat podcast podcast changed his opinion of podcasts. He'd probably say no, but he's Howard Stern so he's allowed to. I'd also ask him hair tips. He's got some seriously rad hair still after all these years.

What’s coming up for the band that you’re most excited about?
Andy Herrin: I'm really excited about our upcoming tour with Beach Slang. Not only are they an amazing band, so getting to see them play every night will be awesome, but this is *repeat repeat's first extensive run with another band. Also, we're playing Toronto for the first time on this run, and I'm a huge fan of the old Much Music scene there, so I'm gonna geek out a bit.

Is there anything else you want fans to know about you?
Jared Corder: I have a tattoo of the flux capacitor. Andy loves chocolate Twizzlers. I didn't know they were even a thing until I met him. Kristyn and I have 10 pets (including a bird and a horse); and if you love horses, Kristyn will be your best friend.

Talk about your upcoming album and new single.
Our sophomore record Floral Canyon stretched our sound and allowed us to add depth, drive and an almost spooky feel to our sun-drenched, surf-tinged pop that makes us *repeat repeat. We think it's a mixture of bloom and doom, tackling the lightness of love in juxtaposition with modern culture, friends' rocky relationships, religious ideologies and all points in-between.

“Girlfriend,” our new single, tells the story of once-in-a-lifetime love, and was written based around real events that happened when my wife and I were dating. Sweet subject matter with fierce delivery. The inspiration for the song initially came as a response to Best Coast's song, “Boyfriend.” We're telling another side of the story.