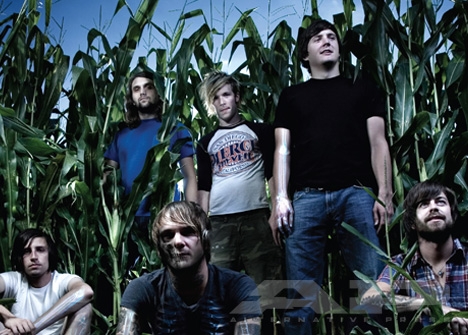 After 2009 gave us the reunion we all thought weâ€™d never see (uh, Blink-182–duh), what will 2010 have in store for ex-band dudes with receding hairlines and/or bank accounts? Well, itâ€™s impossible to know for sure, but weâ€™ve done our best to handicap the odds regardless.
By Scott Heisel

AT THE DRIVE-IN
WILL IT HAPPEN: 10:1 odds
SHOULD IT HAPPEN: Yes. A thousand times yes.
THE SCOOP: Legitimately one of the most important bands of the past 15 years in terms of punk, hardcore and the underground rock scene in general, At The Drive-Inâ€™s 2001 breakup wasnâ€™t exactly amicable; however, during the time since (and, like, 387 Omar Rodriguez Lopez solo albums later), tensions seem to have smoothed over somewhat; last summer, former ATDI frontman Cedric Bixler-Zavala mentioned heâ€™d been in discussions with the rest of his former bandmates, and guitarist Rodriguez Lopez commented that the entire band got together at his house to hash out past differences. Look, up until last week, we never thought Bret Hart and Shawn Michaels would ever shake hands, let alone hug, so if the Montreal Screwjob can be put to rest, so can this beef.

CHIODOS (WITH CRAIG OWENS)
WILL IT HAPPEN: 25:1 odds
SHOULD IT HAPPEN: Eh…
THE SCOOP: A lot of people have been marking Chiodos as done forever since the rather shocking news this past September that the band fired charismatic lead singer Craig Owens, considered by most to be the â€œfaceâ€ of Chiodos. What most people donâ€™t know is that the bulk of Chiodosâ€™ music wasnâ€™t written by Owens, which means the songs themselves–no matter who the band get to sing on top of them–shouldnâ€™t sound too different from the stuff that made thousands of people fall in love with them in the first place. That said, we think Craigery has a bit too much pride to go crawling back–even if the band begged him to–and weâ€™re excited to see what both sides of this split come up with creatively in 2010.

PANIC! AT THE DISCO (WITH RYAN ROSS AND JON WALKER)
WILL IT HAPPEN: 30:1 odds
SHOULD IT HAPPEN: It depends on your feelings about exclamation points.
THE SCOOP: Ryan Ross and Jon Walker seem to be thrilled to be writing throwback â€™60s pop in their new outfit, the Young Veins, and current P!ATD members Brendon Urie and Spencer Smith appear to be more than content returning to the electronic-infused pop-punk they first made their name with on A Fever You Canâ€™t Sweat Out. To reunite the bandâ€™s â€œclassicâ€ lineup this early on after their split would seem pretty anti-climactic; letâ€™s see what these duos can come up with on their own.

SOMETHING CORPORATE
WILL IT HAPPEN: 5:1 odds
SHOULD IT HAPPEN: This answer depends on if youâ€™re Team SoCo or Team Jackâ€™s.
THE SCOOP: Not that we don’t love “Punk Rock Princess,” but we at AP are firmly in the Team Jackâ€™s camp, as we thought Andrew McMahon & Co. did one hell of a job with 2008â€™s The Glass Passenger under the Jackâ€™s Mannequin moniker. Of course, you canâ€™t deny that fans are dying to see SoCo one last time, and since all the members are on good terms (and are already booked to do a one-off show headlining the Bamboozle Left this March), we wouldnâ€™t be surprised if it blossomed into a full-fledged reunion run. With a B-sides and rarities set coming out later this spring, too, this summer seems like the perfect time to drag out the olâ€™ piano–hey, Kevin Lyman: You made â€™em an offer yet?

THE STARTING LINE
WILL IT HAPPEN: 2:1 odds
SHOULD IT HAPPEN: No. A thousand times no.
THE SCOOP: Look: Weâ€™ve loved Kenny Vasoli since TSLâ€™s early days. But itâ€™s impossible to deny that his best work has come in his new band, Person L. Of course, TSL already came together twice over Christmas for a pair of sold-out reunion shows in Philadelphia, and itâ€™s only a matter of time before the guys get the itch to spend six to eight weeks of their lives in House Of Blues nationwide. We could even see a new album in their future. But Kenny, promise us one thing: No matter what happens with the Starting Line, never give up Person L. Never. alt