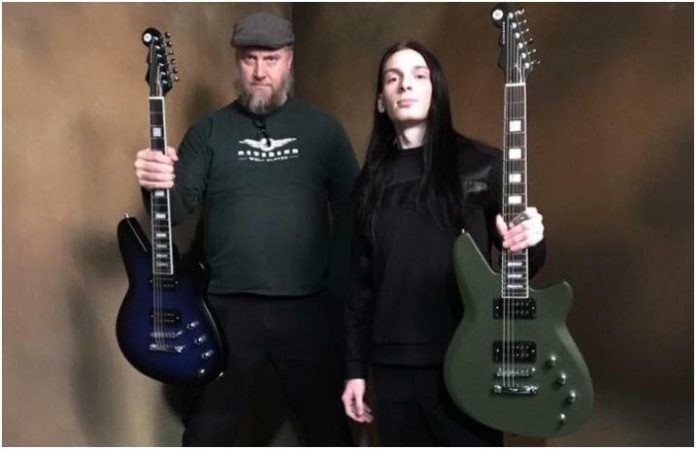 Reverend Guitars started as a Detroit-based guitar company founded in 1997 by luthier and designer Joe Naylor. The brand grew over the years with their unique body styles, custom pickups and boutique amps. In 2015, the husband and wife powerhouse team of Ken and Penny Haas moved the operation to Toledo, Ohio, taking on the roles of CEO and COO respectively and opening up a whole new realm of possibilities.” These days, artists such as Billy Corgan (the Smashing Pumpkins) and Reeves Gabrels (the Cure, David Bowie) are big names with Reverend signature model guitars, but the couple made a game-changing move by deciding to work with new up-and-coming artists such as Shade Balderose of now Grammy-nominated hardcore heavy-hitters Code Orange and Matt West of pop-punk powerhouse Neck Deep.

READ MORE: Here are some of your favorite guitarists’ worst injuries

San Francisco! You know how to put a smile on 5 boys faces.
��: @instabaeth pic.twitter.com/R0ZXx1Kd9V

“Everyone here loves music, guitar, plays in bands and makes their living off of the music industry. There are no giant corporate capital investors,” Ken says. “We started with a loan and built the business organically. We don’t buy dealers. We don’t exceed demand and give stuff away. Our artists actually tour with the exact guitars we put their names on and sell to the public.”

Ken is a 6 feet 6 inch behemoth of a man with a big beard and an even bigger heart. His outgoing attitude and love for what he does has been a driving force for the new face of Reverend whether he’s dealing directly with artists or dealers. Whenever a band is in town he treats them like royalty, showing them around the warehouse and let’s them jam on new products. Almost immediately, he explained something called “The Great Endorsement Myth.”

“We don’t endorse anyone. Nobody gives a shit what any company thinks of your music or art,” Ken says. “When someone tells me they’re endorsed by someone I immediately think, ‘Do the people who make those strings, picks, amps, etc. really like this artist? Why does anyone care?’ Artists endorse companies. That’s the way it’s supposed to work. I don’t pay any of these players to use our guitars. They endorse us by choosing to use Reverend night after night.”

Penny is in charge of social media, marketing and day-to-day operations for the company. She has a very calm demeanor, although like her husband she’s still a no-bullshit kind of person.

“We really make friends with a lot of our artists, and we take care of them,” Penny says. “Almost everyone in the building is currently in a band and some did the whole touring in a questionable van thing. We get it. We understand the day-to-day, so when the artists have a guitar emergency, we know that it’s their whole world.”

The decision to go after younger artists was always part of the plan for Reverend Guitars. Ken and his crew were all young, hungry and in bands just like the guitarists they adored on stages around the globe. Early on, they got their guitars in the hands of endorsers Ron Asheton, Mike Watt, Meat Puppets, Down By Law, Samiam, the Toasters and other bands they loved growing up.Once they established an endorser base, big artists started reaching out to their company rather than the other way around, including Billy Corgan, the Tragically Hip, Drive-By Truckers, the Black Eyed Peas, the Jacksons, the Decemberists, Reeves Gabrels, Rick Vito (Fleetwood Mac), Pete Anderson (Dwight Yoakam), Unknown Hinson, Fu Manchu and the Sword.

“I noticed something,” Ken says. “The longer we were around, and the more we were slowly and steadily growing and getting established, the more I heard the middle-aged people and many of my contemporaries telling me guitar was dying. I was like—bullshit.”

Ken, Penny and Naylor decided to take an untraditional route and give signature models to rising stars in the game. Bands such as Citizen, Code Orange, Hot Mulligan, Defeater, the Plot In You, Bad Cop / Bad Cop, Mitski, Dangerkids and many more were already playing Reverend Guitars onstage, so opening that world of bands to signature models was something the major companies weren’t doing.

“Popularity in the guitar world and talent are a plus. In a few cases, endorsers have had great ideas for personal mods they wanted done to stock models for their use–and that was all it took,” Ken says. “As far as the ground up sig model, Joe Naylor has an amazing ability to listen to the tone that is in an artist’s head. The Mike Watt and Pete Anderson projects are a great example–they wanted a very specific tone, and Joe can take that description and turn it into reality.”

Reverend solidifies their bond with artists by evening the playing field. Whether you’re headlining arenas or playing basement shows, as long as you’re out there playing a lot and have passion, you’re a good fit for the company. Code Orange’s Balderose got a signature model after having a relationship with the company for years, and it paid off in 2018 when the band were nominated for a Grammy.

“Shade reached out to me on their first or second tour. He had seen and played the original Bayonet model and was interested in artist pricing,” Ken says. “We worked it out, and I met the band in the parking lot of Guitar Center here in Toledo. As time went on, the Bayonet model went through some changes–but Shade preferred the original design. With the pending release of Forever, and the fact that through their live shows they were quickly gaining the reputation of being a must-see—because they’re fucking amazing—we resurrected the original Bayonet as his signature model.”

“We made the decision long ago that we have artist pricing for everyone who fits our definition of a professional artist—and we mean everybody,” Penny says. “If Dave Grohl calls tomorrow—cool. ‘Glad to meet you. What’s your credit card number?’ It seems like the fairest way to do things so we’re not judging people based on record sales or venue sizes or whatever. Your business is your business.”

Working as a couple has its magic moments as the Haas family witnessed things such as seeing the Cure at Wembley Arena in London, Alex Lifeson from Rush owning a Reverend Sensei model guitar and the growth of acts such as Code Orange from baby band to blowing up.

Although Ken loves all of the guitars the company works on, Penny has an affinity for one special “signature model.”

“I’m partial to the Ken Haas Signature—Ol’ Bess—an Eastsider S that got damaged in shipping somewhere along the way,” Penny says. “The guys decided it was a ‘project’ and relicked it—sanded down the finish, burned part of it, smacked it with keys. It has a Band-Aid pick holder. I’ve been onstage with him when he’s dropped it on purpose from his full 6 feet 6 inches in the air. It’s seen some things. He loves that dumb guitar.”