Relive the event with some highlights below.

Gratitude is the answer to everything these days. Riot Fest knows that inherently. Across all four days of the festival, that feeling permeated the grounds of Douglas Park. Whether it was Billy Corgan of Smashing Pumpkins professing his love for Chicago several times over or Flaming Lips’ Wayne Coyne performing from a human hamster ball to keep fans safe, the importance of this year’s festival wasn’t lost on them. During a time when so many other events had been knocked down flat, it’s amazing that the festival happened at all—that live music has made its return. These are some of the highlights.

Joyce Manor ripped through their self-titled album, playing it in its entirety. Full-album playthroughs are a longstanding Riot Fest tradition, offering fans a chance to hear songs that are rarely performed live or revel in nostalgia. With most of the tracks being one- or two-minute bursts, the band had enough time to run through 10 other songs. This included a cover of My Chemical Romance’s “Helena,” where the crowd vehemently spat back every word.

Patti Smith And Her Band

“I’m not trying to look scholarly or cool; I just can’t fucking see,” Patti Smith quipped early in her set as she sported a pair of sunglasses. That’s the thing with her, though: Her effortless cool has always been an intrinsic part of her artistry. She ran through 10 tracks, including a Bob Dylan cover (“One Too Many Mornings”) and several Patti Smith Group cuts. Between songs, Smith even signed a vinyl copy of her 1975 debut album, Horses, for a fan in the crowd. “I’ve done my job. I’m going home,” she joked after handing it back. For the final number, a medley of “Land” and “Gloria,” Smith exerted herself so much that she stood onstage panting before launching back into the song. 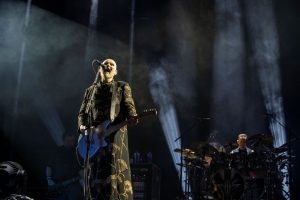 The joy that Smashing Pumpkins felt to be playing their first show of the year, in their hometown no less, was palpable throughout their headlining set. Eager to perform songs off their most recent release, CYR, “The Colour Of Love,” “Wyttch” and “Ramona” made their live debuts. However, the band dedicated a sizable portion of their setlist to the classics. This included Mellon Collie favorites “Bullet With Butterfly Wings,” “1979,” “Tonight, Tonight” and “Zero.” They also dusted off “Quiet” (Siamese Dream) and “Crush” (Gish), their first time performing the songs in 27 and 13 years, respectively. 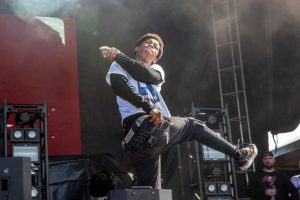 When KennyHoopla entered the stage, he didn’t start singing. He simply looked out, shaking his head in disbelief while he sized up the crowd. “I’m honestly so speechless, and I’m too nervous to talk,” he uttered, his throat catching. The artist soon launched into “silence is also an answer//” and ended up incorporating every song from this year’s SURVIVORS GUILT mixtape into his set. The crowd was eager and willing to feed all of his explosive energy right back to him. Now imagine what it’ll be like if he ever performs an album in sequence.

DEVO are as timeless as they are bizarre. During their hour-long set, the band never failed to entertain. That included costume changes, where they went from wearing their red energy domes to sporting yellow hazmat suits to donning monkey masks (which in some ways felt like the most surreal parts of a hallucinogenic trip). They also treated fans to three songs from their debut album in a row—“Mongoloid, “Uncontrollable Urge” and “Jocko Homo.” 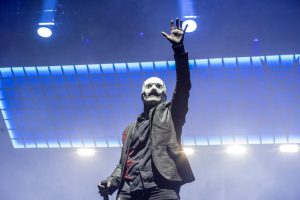 Throughout their hour-plus set, Slipknot performed classics (“Wait And Bleed,” “Eyeless”) and new favorites (“Unsainted,” “Nero Forte”), unrelenting in their ferocity. “Slowly, smartly but surely, we are pulling ourselves out of this shit, but the only way we do it is fucking together,” frontman Corey Taylor stressed toward the end of their set. “There is no room for bullshit. There is no room for not being on the same fucking page.”

Check out the photo gallery below, taken by Ryan Bakerink.