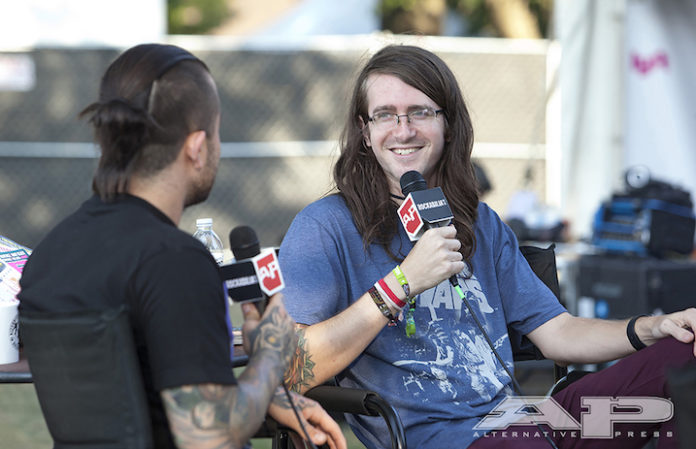 AP hit the road to Chicago for Riot Fest 2017 this year! Presented by Rockabilia, APTV correspondent Stevie James had the chance to post up and interview a ton of your favorite bands on-site.

So far, we have interviews with Four Year Strong, Seaway, Like Pacific and Nothing More. We’ll continue to update this page as more go live, but be sure to continue to check our Facebook page to watch the interviews LIVE and as they happen.

“When I was a kid, the bands that I loved were unattainable. I didn’t know what they were eating for lunch on a Tuesday, so they were like Gods in my mind.”

Seaway answered some fan questions, including their favorite song from their new album Vacation.

“We’ve always wanted to play the Chicago one and, to do it on our release day, it’s gonna be super fun.”

This is Like Pacific’s second time playing Riot Fest, and they caught up with Stevie James right after they performed.

Nothing More talk how fans have reacted to the new album, how they push their sound and more.

“For us, this has always been a tool for self-medication. There are obviously other ways to self-medicate, and I’ll do those from time to time [Laughs], but I try to do this one the most.”

The guys give tips for drummers, possibly playing the U.K. (hint, hint, wink, wink), their favorite songs and what they’d do if they woke up tomorrow as the opposite gender (fan question, not ours!).

Vic Mensa talks Chicago, how at home he feels at Riot Fest and his unique style.

Frontman Derek Sanders answers fan questions, including: What album saved your life? Which Mayday song does he have the strongest emotional connection to? And more!

“We realize how lucky we are and we don’t let any small stuff get in the way. We love each other and it’s a cool thing.”

“Back in ‘78 when we came over here, for the first time, we realized you have to kick ass in America. And we like kicking ass.”

Again, check back here on AP for more interviews or head straight to our FB page to watch live!