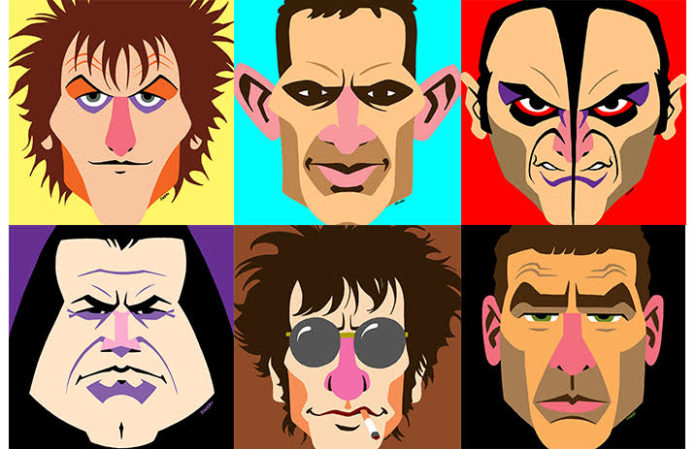 But over the next 12 years, Petryshyn and partners Sean McKeough and Corrie Christopher Martin expanded Riot Fest throughout North America and changed the face of music history. They also suffered some incredible highs and devastating lows (such as the unexpected death of McKeough last year). This week, AP is presenting a three-part special on Riot Fest, told by its inner circle as well as the bands it will forever be associated with. This is their story, in their own words.

BRENDAN KELLY(VOCALS/BASS, THE LAWRENCE ARMS): The thing that is so cool about Riot Fest is that it is a punk-rock festival. It is run by punk rockers.

JAMES ALEX (VOCALS/GUITAR, BEACH SLANG): When people are like, “Man, Riot Fest is so amazing every year,” it’s like, “Yeah, because it’s curated by people who really give a damn about music.”

ALEX: They are smart and thoughtful and purposeful about how they do it. Which seems to be common sense when you are putting on festivals. But then, it’s kind of not. [Laughs.]

GLENN DANZIG (FRONTMAN, DANZIG, THE MISFITS): I don’t know if there are a lot of promoters out there like that anymore, who actually love the music and are fans.

TIM MCILRATH (VOCALS/GUITAR, RISE AGAINST): I have never met another promoter like [Mike]. He has such a personal interest in it. He really cares about creating an environment where, at the end of the day, everyone walks away high-fiving.

ERIC SPICER (DRUMMER, NAKED RAYGUN): The guy puts his heart and soul into it. [The event is] not just some shit that somebody slapped together. Mike is very genuine about what he does.

TOMMY STINSON (BASS, THE REPLACEMENTS): There is also something about [what Mike does] that is really unique. I mean, just the lineups they put together.

“There was never a thought in my head that it would go beyond one year. I thought that it was going to be a one-time thing, and that was that.”—Riot Fest founder, Mike Petryshyn

BEN PERLSTEIN (FORMER MANAGER, TOMMY STINSON):  I don’t remember who it was—it was either Trent Reznor or Josh Homme—but they basically said that [Mike’s]  lineups are like art.

DANZIG: When you think about how big Riot Fest has become, it’s quite an accomplishment. So, to keep it about the music while also realizing the business aspect of it, that’s tough. But he does a great job at it.

MIKE PETRYSHYN (FOUNDER, RIOT FEST): To be honest, I didn’t know what to expect [when I started Riot Fest]. I knew I was putting my ass on the line, and that was scary. But there was never a thought in my head that it would go beyond one year. I thought that it was going to be a one-time thing, and that was that.

MIKE PETRYSHYN: I think it was just in my head. This was late spring 2005. I don’t know why. I was at work and I was writing down, like, the potential names of a festival. And I just wrote down “Riot Fest.”

KELLY: Mike was just sort of around. I don’t recall meeting him or even the first conversations we had. All I remember was that, all of a sudden, there was this festival [that he was booking] called Riot Fest.

MIKE PETRYSHYN: I had never [booked a band] before. So, I didn’t know what I was doing. I was working at a law firm editing documents and contracts.

LARYSSA PETRYSHYN (MIKE’S SISTER): It was a lot of work. I don’t know if people realize all of the blood, sweat and tears that goes into [putting together a festival]. But it was a lot.

MIKE PETRYSHYN: It was just me, not knowing anything. I don’t remember which band it was, but they were suddenly flying in, and the agent was like, “Hey, are you providing backline?” I was like, “Ummm, let me check on that.” [Pauses.] I had no idea what backline even was.

KIENLEN: I personally did not know [he had such little experience]. But it’s pretty freakin’ impressive. I mean, that first year was like when you were a little kid drawing punk logos on your notebook. It was Dead Kennedys, the Misfits, the Germs.

EAST BAY RAY (GUITAR, DEAD KENNEDYS): It was all classic bands—and [while it wasn’t those band’s original lineups], they all have classic songs.

KIENLEN: Even though the bands [that year were], like, most of the band and a different singer, it was exciting for me. It seemed to be born from a love of punk, which was something we obviously shared in common. We felt pretty honored.

MIKE PETRYSHYN: It was just so much work.

LARYSSA PETRYSHYN: I don’t think I slept for probably four days. I was there [at the Congress Theater in Chicago, where Riot Fest was held that first year] helping fill every rider. I was scrubbing toilets.

LARYSSA PETRYSHYN:  My mom was baking cookies and brownies. [Germs guitarist] Pat Smear was eating my mom’s brownies, and she was like, “I am going to send them to you for your birthday.” [Laughs.] And she did.

MIKE PETRYSHYN: I was part of the street team. I advanced all the shows.

LARYSSA PETRYSHYN: I was even bouncing people out of the backstage. There was one girl that was completely drunk, so I flipped her over my shoulder. The security guard looked at me and goes, “What the…?!” And I am like, “Hey, she was causing trouble…”

KIENLEN: That weekend, we ended up hanging out with [Shane West, then-singer of the Germs]. He was an actor. He played Darby Crash in the Germs movie. [Ed’s note: He also starred in the Mandy Moore romance A Walk To Remember and was a regular on ER. Seriously. You should Google him.]

I remember he had this bottle of Jack Daniels and, I don’t know if I should say this, but he was kind of slipping into character. [Laughs.] He had a Germs tattoo on his arm, he was wasted, he had a leather jacket with no shirt… we were just like, “Yeah, man, you go.”

MIKE PETRYSHYN: [When it was over], I was just like, “I never want to do this again.” It was physically and mentally draining. That was the most stressed I have ever been in my life.

LARYSSA PETRYSHYN: We definitely had to breathe afterward. But I always knew he was [going to do a second year]. He was already planning on who he was going to get next.

CONTINUED ON NEXT PAGE: REUNITING A CHICAGO PUNK INSTITUTION AND A CHANGE OF VENUE

These 10 alternative covers put a modern spin on ’90s favorites