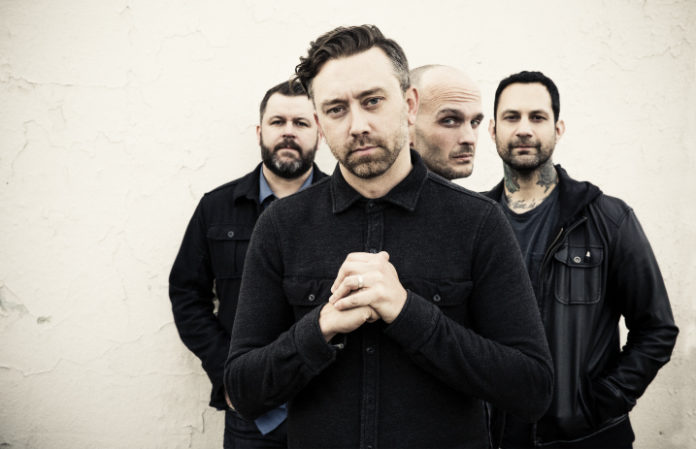 As the Trump administration continues to erode the basic human rights of most Americans, it’s imperative that we, the people, fight back with everything we’ve got.

Read More: 18 musicians who are clearly against Donald Trump for US President

Rise Against have been railing against injustice for almost two decades, but the election of 45 has truly stoked their fire; and with Wolves, the Chicago band have come out swinging. Not only is it a record that challenges the destructive, ignorant, intolerant and prejudiced ideologies championed by Trump and the Republican Party, but it’s also a powerful call to arms—one that seeks to fight these things head on and encourage others to do the same.

Over the phone, frontman Tim McIlrath explains why rebellion in the age of Trump is more important than ever, and the role he wants Wolves to play in the fight back for equality and justice.

Rise Against have been fighting the good fight for a long time now. But it seems like the bad guys are winning. Does reacting to or resisting the Trump administration feel futile to you, or do you have more hope than that?
I do have more hope than that and I’ll tell you why. When you watch the right wing in America, while it seems like they are in control or in power, but if you look closer you see examples of why they’re actually on their dying breath. They have to lie in order to win nowadays. The only way the right can dominate the field now is through a series of lies—like voter fraud, which is a complete lie, which they used to disenfranchise and suppress votes. They used gerrymandering, which is changing the districts around to ensure they have a majority by reshaping the maps. They lie about climate change—we’re the only country in the world that debates the science. It’s all fueled by think tanks who are fueled by oil companies. So when you see all these lies compounded, at some point they will be held accountable for those lies. And they’re also showing their ass to the next generation of voters. I sing for Rise Against and people at my shows are young. They’re between the ages of 15 and 21. They’re young and I get to know how they feel, how they think, and you realize that they’re listening. Even if they’re not voting yet, they’re out there and they’re paying attention to what’s happening, and the modern-day Republican Party is showing this generation who they are and what their colors are. We’re learning how unprincipled they are, we’re learning that the Christian right will put their party before their god, we’re learning that the party is propped up on lies that aren’t sustainable. So in some sense, I see it as a silver lining, because when you see somebody in their last-ditch effort, with their last few tricks up their sleeves to hold onto power, you know they’re on their dying breath.

With that in mind, you recorded Wolves in Nashville, where you’ve said you were confronted by Trump signs everywhere. How disconcerting was it to be surrounded by people who don’t believe what you just said, who are actually on the other side of your politics?
It was good for me to be out there. It was sort of this parallel to our studio experiences, too. We’ve been [making] records with Bill Stevenson from Black Flag and the Descendents for over 10 years, so going to Nick Raskulinecz’s and going to Nashville was putting ourselves outside of our comfort zone musically—and then when I walked outside of the studio, it was clear we’d also put ourselves physically outside of our comfort zone by leaving Chicago, which is this liberal nest where you’re hard-pressed to find someone who disagrees with the progressive politics of Rise Against. Instead, we put ourselves in a place where it’s like “Wearing this T-shirt might cause people to want to fight me” or “Saying this out loud puts me a little more at risk.”

But you can also learn from that at the same time.
Right. I think it’s really good for anybody to see both sides of the fence and spend time in a place that is hurting—and helping to create the narrative of the country you live in. That was something that was kind of always on my mind, knowing that there are people out there who fell for someone like Donald Trump, who were conned by him, and that these are people just like you and me. So we have to work out how to bridge that gap and figure out where the truth lies in a lot of our arguments with each other.

Direct politics aside, Rise Against have always had that personal aspect to its songs, and that exists here, too, in “House On Fire,” which is very much a love song. How has that personal side changed with this political climate in America? Presumably, the relationships you’re writing about can’t escape what’s happening around them?
It’s interesting. This is probably one of the first times—or at least the most divisive time that I’ve been alive—where personal relationships are being affected by politics. I hear from people who work in offices where their workplace relationships are being strained and relationships with their neighbors and that kind of thing, because there really has been a line drawn in the sand. I was watching that happen in and around our studio, and in and around Chicago as well, hanging out with friends who have pretty much lost relationships and friendships over Facebook comments. But Rise Against has always tried to write songs about the human condition, which is far more complex than simply politics or the personal and finding a way to intersect those two. I’d like to think that this record reflects the strain on those personal relationships that the current political climate is putting on all of them.

So what are your hopes? Is there one thing that you wish this album would do for people, like instill a sense of fire or rage or hope in them?
I think the power of music cannot be understated. I think to dismiss what any musician does as just four guys on a stage playing a show and moving onto the next town and writing a record. You can say that’s all trivial or it’s all entertainment, but the people who say that forget how important music was to them when they were growing up. Music is—and studies have shown this—more important to a young person and has more to do with shaping their opinion than religion, than their family, than their teachers, than their friends, all of those things. Music plays such a huge role in a music lover’s life that it actually has that power. So that’s a lot of responsibility, but I realize when we go out there, we’re at least part of the fabric that creates that person’s life and shapes how they feel and what they think—and at least causing them to think a little bit about their surroundings.

But can it start some kind of revolution? Do you see Rise Against as part of a movement to change things?
What Rise Against is going to do is keep going out there and keep talking to and engaging our audience. I realize our audience is not the biggest audience in the world, but it’s our audience and that’s where we do what we do. Being a band for 18 years now, I’ve met people who have, through bands like us, had their lives changed, and are now adults working and giving back to the world around them. We’re going to keep doing that. And I feel like the Trump administration has given us even more fertile soil to make that kind of shit happen. The Trump administration has made our job really easy because we’ve been trying to point out some of what the right wing tries to get away with—and now they’re not even trying to get away with it. They’re just telling you they’re fucking you! What we used to dismiss as conspiracy theories was in a press conference yesterday morning. When your secretary of state was the head of Exxon, it’s no longer a conspiracy theory that American foreign policy is heavily influenced by oil production. So they’ve made our job easy. Now, we need to go out there, connect the dots and help have the conversation with our fans, because they’re going to be that next generation.