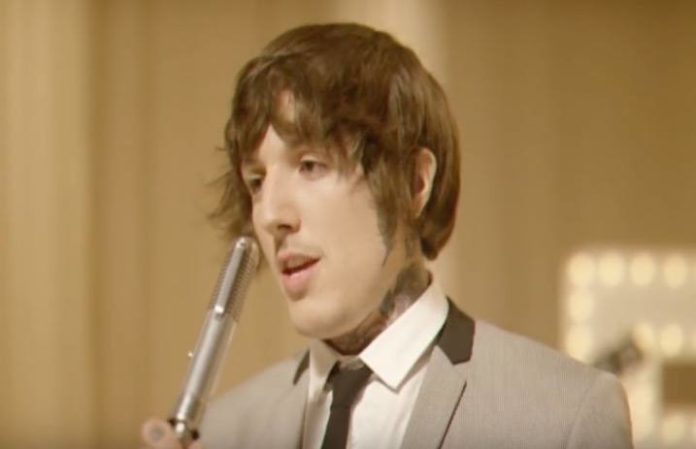 Nothing screams “I never want to work in an office, ever” quite like a face tattoo.

Tons of the musicians we love bear some kind of body art, but few have taken the ultimate plunge and put their money where their mouth is—in some cases, literally.

Read more: 18 of the coolest knuckle tattoos in rock music

Here are 10 of our favorite rockers who are in the facial ink club:

The best thing about nihilism? Nothing.

Bring Me The Horizon vocalist Oli Sykes’ face tattoo is usually covered up by his shaggy mop of hair, but every now and then you will catch a glimpse of a long feather from the top of his left ear to the bottom of his jaw bone.

The Metro Station frontman has “TN” for his native Tennessee with an anchor on his left temple and the word “faith” with a bird above his left eyebrow. Under his left eye are two feathers and under his right eye is a cross. The name of Cyrus’ first serious musical project “Ashland” is scrawled across his right jawbone underneath three stars in a circle with a rim around it, and his most recent addition is a dagger from the top of his left ear to the bottom of his jaw bone.

Post Malone got “Stay Away” drawn above his right eyebrow just before Christmas. It’s said to be after the Nirvana song, and as if to confirm that, he’s also got a tiny, simpler version of the Nirvana smiley-face logo beneath his right eye. UPDATE: Since the article was first published, Posty added some super relatable “Always Tired” ink under each eye.

Lilac is for Lovers ~ See you all in the pit ��⚡️�� Thank you @charlybrady.xo at Blue Tit Crouch Hill for the lilac upgrade x

An accomplished tattoo artist himself, Frank Carter has a snake on his scalp whose tail and jaws poke out menacingly on either side of his face. Carter also has two tear drops under his right eye and a thin upside-down cross resting under his left one.

Shout out to @swolecartel for hooking me up with some new workout gear.

Papa Roach singer and possibly the cheekiest dude in nuu metal has two small numbers, a star under his left eye and what appears to be a tree under his right eye.

This stickman extraordinaire has a diminutive star on his left cheekbone and an anchor on his right cheekbone, but it’s the Virgin Mary praying on Travis Barker’s scalp who has really got our attention.

Mastodon wildman Brent Hinds got a boldly distinctive Polynesian pattern across his forehead and down the right side of his face on a trip to New Zealand a few years back.

If anybody has seen my wife @how2girl could you tell I finally took a shower and she might wanna head home. ��

Actor Douglas Booth was recently chosen to play Nikki Sixx in biopic The Dirt. Which might keep the on-set makeup artist busy, but in real life, the Mötley Crüe four-stringer keeps it simple with a miniature star on his right cheekbone.

Love the way this checkered @Fender Hellcat guitar turned out. This past summer on the @Rancid/@DropkickMurphys tour we did a joint encore every night, the checkered Hellcat was my go-to acoustic guitar. Plays amazing live. Check it out now at your local music shop for yourself! �� @tobias_sutter_photography

The Rancid frontman has an almighty cobweb on the top of his skull with jagged corners sprawled across his forehead.

Armstrong’s bandmate and bassist has “SKUNX” boldly positioned in the middle of his forehead with two little stars on both sides like symmetric bullet points. Under his left eye he has another star with dots in between the spikes and under his right eye, in true punk fashion, a skull and crossbones.