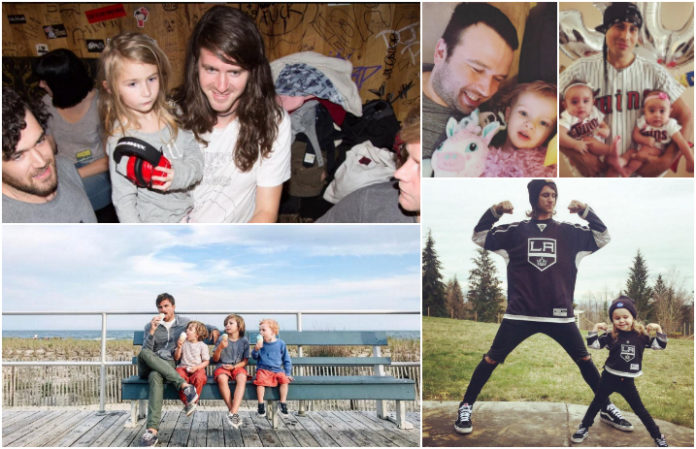 Although many of our favorite bands have enough anti-Father’s Day songs to make that its own list, it seems like they’re absolutely killin’ it when it’s their turn to become “the cool dad.” Here are some of our favorite musician dads with their most prized possessions: not their instruments, but their children.

Here is punk’s superstar drummer on a trip to France with his children.

Got to fly home for our day off. Went swimming, played video games and painted some beautiful toe nails. ��������‍��‍��

This adorable LA Kings fan has a music power couple as parents — Blessthefall’s frontman and singer/songwriter Lights. Here you can even see one of Beau’s tattoo dedicated to his daughter, complete with a rocket ship and her birthdate.

Which Bayside album do you think she's listening to first?

I'm self proclaiming myself rockstar-super-soccer-dad. This week it's all about my little monsters. I'm enjoying all the time I can get with them before I take a flight to Germany to start the tour…even if it means being a taxi-dad for 2 soccer practices in different parks and a gym class at the other end of town….after doing a couple of interviews in the afternoon. Ouffff…I'm slightly out of breath.

Collectively, the Simple Plan guys have a total of seven kids (Seb is a papa too)! It seems like not too long ago, they were singing “I’m Just A Kid” themselves, but Simple Plan is the definition of a pop-punk dad band.

Now that Mabbitt's kids are getting older, they all act more and more like best friends.

Robert Ortiz (Escape The Fate) with Molly and Miley

Na' Pap Patheu & K'ive Patheu are now officially members of the Tigua Tribe. They had a beautiful blessing and tribal ceremony… hot.. but beautiful none the less. Thank you to Fabian and Celina for being their tribal Godparents. Thank you to our war captain and council members for fitting in this ceremony during their busiest time of year. #Blessed #Literally #Tigua #Native #NativeAmerica #Twins #Father #Daughter

Shortly after a beautiful blessing and tribal ceremony, the ETF drummer is so proud that his two angels are now official members of his Native American tribe.

Goodnight from me and my angel