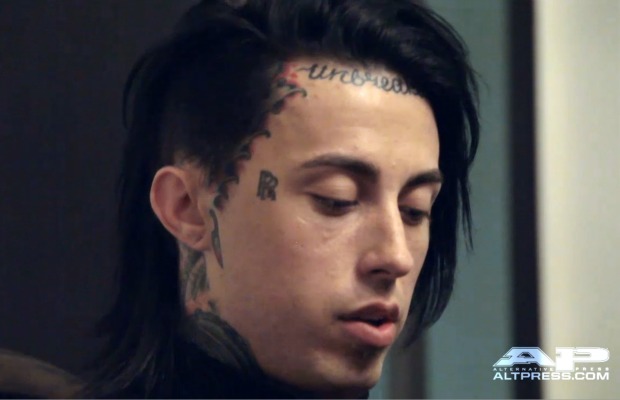 To paraphrase “The Usual Suspects”: “And poof. Just like that, they're gone.”

The Falling In Reverse frontman recorded “I Wash Cars” back in December, blowing off steam in the studio about the “beef” with I See Stars and Sumerian Records. He went after Lorenzo as well, in response to the video “AS REAL AS IT GETS: Is Ronnie Radke Still Your Hero?” that featured Antonucci in wrestler mode. The video has racked up almost 400,000 views.

Radke's track leaked this week, with the singer/rapper immediately taking to Twitter to squash the beef with I See Stars. The band accepted his call for a truce. However, Ash and Lorenzo were already in the studio crafting a response by the time they saw the apology. They accepted Ronnie's apology, everything is cool, but they released the song anyway (with Ronnie's encouragement) on the Sumerian YouTube channel. In a since deleted Tweet, Ronnie said positive things about the response.

“When Ronnie Met Sally” disappeared and Sumerian Tweeted the following, linking to a story about the unrest in Egypt:

ok play time is over, hope you smiled and had a laugh. please be aware of what is happening in the world right… http://t.co/G5acMyDyXy

Not long afterward, Ronnie's original diss track disappeared, as well. The YouTube error message says it was removed due to a copyright claim by WMG. Warner Music Group owns the indie distributor ADA, which distributes both Epitaph and Sumerian.

So all is well that ends well and all is fair in love and war.

For those of you that missed it, here are the lyrics from each track in full:

You guys didn't think I was gonna say something, did you? Well guess what… Haha… I'm about to expose you punk motherfuckers right now. Sumerian Records, I See Stars and Lorenzo The Main Event, you punk pussy!

Motherfucking I See Stars? More like I Wash Cars
'Cause I'm about to end your career in just 16 bars
Actually you never had a fucking band from the start
So it's kind of hard to start something that never had heart
You fucking fake phonies popping slander off my name
Trying to make my fans believe all the lies you claim
I never stole a dime from you that's the goddamn truth
You guys dropped off the tour 'cause your plan fell through
Yeah deny it motherfuckers but I got proof
You fucking punk pussies forgot about the emails you slew at me
Haphazardly asking for a second chance
But actually secretly planning to have fans come to the shows chanting

I Wash Cars! I Wash Cars!
You've been a band four years but have not gotten far
Maybe I can help you sell records for a bit
You guys talk a lot of crap but you haven't done shit

Ronnie has armed me, my army's behind me
And honestly The Main Event, whose backing Sumerian
Whose acting a little black, saying “nig” a little bit
At the end of this little track, I'm a end it a little bad
You ignorant little man, I'm a savage in this rap
You's Italian? You Black? You wrestle!
The fact is, you lack the backbone to meet Radke in the back of his bus
[RONNIE]: Now you trying to get buzz off the back of my luck
Well I'm Black in the back of the bus
Waiting to smack a fake thug who's thinking he's tough
'Cause his momma didn't give him enough love, or back rubs
I'll raise Hell above, I never gave a fuck

And Lorenzo you're a bitch
You can suck my dick
Threaten me on YouTube?
Mr. Main Event

Hold up, hold up. [Mocking Lorenzo]: “Bada-bing, bada-boom, I tell it like it is. I'm a scary mothafucka! I go on YouTube and threaten people. I'm so hopped up on these steroids my I See Stars shirt don't fit! I love penis!”

How about you show your face like you said you did?
I put you on my guest list haven't heard from you since
You're a punk ass meathead with weak bread
Pissed off and regret cause the steroids shrunk your fucking penis
And Ash shovin' coke up Mr. Worsnop's nose
And everybody wonders why he spends his money on blow
Oh no
And when I see ya I'ma box ya', drop it like it's hot
Lockin' down your whole block, locksmith
Like the apocalypse when I'm dropping fists
Like a Southpaw, shock ya', dodgin' obstacles
Knocking fools out in the metropolis
A busted lip and bloody nostrils, sock your opticals
That is what you get for talking shit
Better come equipped the next time that you spit something sick
I'm fucking Swift like Taylor get it in son of a bitch
Ironic, isn't it?

Sumerian Records. Ash. 'Sumerian Records,' really? You have a sphinx as a logo. A sphinx. An Egyptian logo. Right? That is a totally different race from an actual Sumerian. Those are two different races! That's like me naming my record label 'Christianity Records' and having a Buddha as our mascot, you fucking idiot. Fuck you.

Fuck I See Stars, you fucking punk pussies. Every single one of you. You know exactly why you were on the fucking tour. Trying to make up some shit so you can get your band to sell a couple more records. Come at me when you can at least sellout a fucking venue you fucking bitch. Fuck all of you. Fuck everyone. Fuck all the fans that agree with I See Stars, too. Fuck you.

I don't give a fuck about any of you motherfuckers. Oh yeah, hey Lorenzo: I've got this video that someone took of you when you didn't know about it. And uh… Well, you be the judge. I'm gonna play the audio right here. Does this sound familiar?

I'm over here now! Yo, start the beat. Hey yo Ash, apparently I'm on steroids and you spend all your money on blow.

Doesn't Ronnie know there's only one Eminem? And he doesn't have a hipster mullet hairdo or forehead tattoos? Check it:

You can't Escape The Fate that you just made for yourself
You're in the karma casino, this is the hand you've been dealt
Your headlining shows, they gettin' worse and worse
Your ticket sales decline, you're Falling In Reverse!

So what you know about hardcore?
You only know about your high school whores
So while you're on your statutory tour
You better tell your booking agent:
'Keep me out of New York!'

Yo I live in LA, you can't be discriminating sexuality
You're 'Fashionably Late' to the 21st Century
You think it's cool to say 'gay' in a negative way?
Calling kids 'faggots' and spittin' on 'em from stage?
Nah, Ronald, that's not OK
You say, 'The Drug in Me is You'?
I say tell all the kids the truth:
Your ass is about to be on trial for that girl you abused
[Lorenzo]: “Sally!”
And I have never done coke as long as I've been livin'
But you accusing me of doing blow is making me livid
How many 8-balls did it take to convince yourself to come and start more shit?
It's kinda sad what you'll do and say just to try to stay more relevant
Renting a Ferrari in your new video?
Trying to rap about your money to get new kids to your shows?
Please, I put the 'naughty' in 'Illuminati' like John Gotti
Now I'm gonna put the end to Ronnie, yeah I said it, bitch
It ain't a mystery, nah, we just making history
'Game Over,' your career was a glitch

And in this corner, weighing in at a verbal weight of 3 tons about to drop on Radke's head. Hailing from Queens, New York, Lorenzo “The Main Event” Antonucci. It's like Ruth's Chris Steakhouse versus Ronald McDonald. Here we go.

You ain't a real thug Ronnie, everybody knows
You're just some insecure punk kicking kids out of shows
And I'm not just some 'dude' threatening you on YouTube
I'll step in the octagon tomorrow, yeah, Bing, Bang, Boom
So let's raise a quarter mill for charity
Me and you, Ascension MMA, it'll be a rarity
Hey yo, son, I'm not even kidding
Kickstart the Kickstarter, let's start the bidding
Let's see who's winning
'Cause I'm as real as it gets, I'm from Jamaica, Queens
You's a scummy little Vegas kid like Pork n' Beans
You're the creep that does coke, Ash has never done blow
[ASH]: I bought my Bentley in cash for 200 stacks and we pass 'Go'