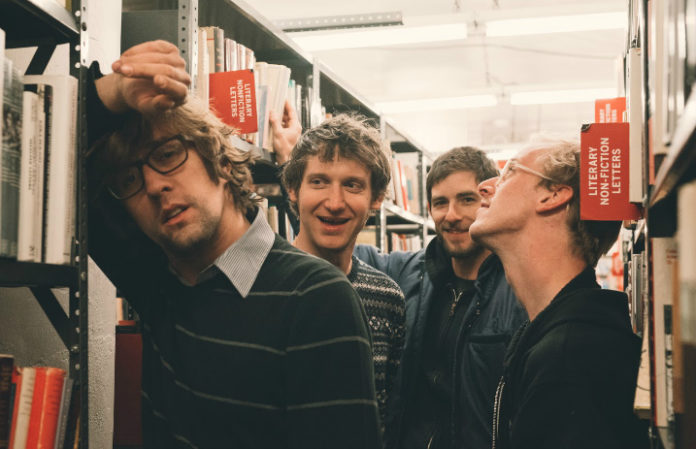 It made total sense to take an unconventional route when interviewing Jordan Hudkins of power chord nerd rockers Rozwell Kid. Their new album Precious Art is itself very unconventional. Although sonically appealing and familiar at times, the album’s lyrical content and song titles are oddly specific and reference strange things. We wanted to poke around in Hudkins’ brain and learn more about the tracks, which will hopefully give you more insight on your first listen (assuming you’ve already pre-ordered their new album from SideOneDummy before its release date of June 23).

The album opener “Wendy’s Trash Can” leads me to suggest your band must eat a lot of fast food on the road.

We had a shit ton of Taco Bell when we had those Feed The Beat cards. I heard a lot of bands talk about how they were burnt out from eating so much Taco Bell, but we blew those cards so fast and still stop there multiple times a week. It’s so cheap and you know exactly what you’re going to get, much to Adam [L. Meisterhans’] chagrin, since he’s the healthy eater of the band and likes to take care of himself for some reason. The rest of us are falling asleep, curling up with these quilts we’ve made out of seven-layer burrito wrappers, and he’s eating hummus in the front seat.

In “Total Mess,” you mention a lot of your flaws. Is that common in your songwriting?

Consciously or not, it works itself into my way of writing. Sometimes something sounds cool or I like the imagery behind a line, which some would say is a tossed-off lyric; but then in the context of whatever I work up later, it makes sense. I think that’s kind of cool. I don’t look at it as lazy, I just think it’s part of the process. I consciously try to keep everything—whether it’s a song I know that’s a little more light-hearted or absurdist, or a story song—I try to keep it rooted in experiences, emotions and thoughts from a universal perspective. Who hasn’t felt like everything is going in reverse?

Just like a “Boomerang,” which weapon best describes you?

Maybe the slingshot? Coming at it as a Simpsons fan, the slingshot in your back pocket is such an iconic image. Something seems so harmless about it. Can you even walk through an airport with a slingshot? I don’t know. There’s that biblical tale of David and Goliath, it wasn’t necessarily a slingshot, but this tiny sling took a giant down with a rock, you know? I like the contrast of something that’s a child’s toy in the cultural mind, but if you use it right, it can be very dangerous.

Which futon are you describing in the song “Futon” and whose is it?

It’s the “universal we.” The feeling of being a drifter and coming in and out of people’s lives. Sometimes I think about a video I saw once where someone took footage of a basketball game and they recentered every frame of footage so it’s centered on the basketball on the screen. The entire game and players are moving wildly around it. It was really cool, but sometimes I think about touring, traveling and moving from place to place in that perspective. Like when you’re on a train and the whole world is moving around you. The futon in the song started off as a different chorus about a party I went to under the Brooklyn Bridge once, where I got paint on a futon in this apartment I didn’t know. It was on my butt and didn’t realize it and was like, “We have to go.” I felt bad about it for a long time, but I was thinking about it and tried to make the chorus work. “Paint on your butt” didn’t sound as good.

After listening to “MADtv,” I imagine you were a fan of that and SNL. Do you have a preference?

I watched a lot of both as a kid. There’s a line in the song about soaking up what I missed on a VHS on a Sunday. That’s a pretty literal line about how I wasn’t either allowed to or wasn’t physically capable of staying awake to watch those shows on Saturday night, so I’d watch them after church on Sunday. It was a good era for both, but I feel like MadTV had more time to prepare. I think I enjoyed it a little more at the time, but I don’t feel like the sketches aged well, and the characters were a little too extreme and broad. I guess for the time it makes sense, but I was a huge fan of the man-baby Stuart, played by Michael McDonald. Mo Collins as his mother was so funny. I was just watching Stuart dance around in his underwear, but now I’ll watch the mom and see what a great job she was doing. I liked Jack the UPS delivery guy and Pat Kilbane, who had a character that was addicted to coffee with his big, bulging eyes. Those stuck out in my mind.

The song “South By” is hilarious because it’s so relatable. Can you explain how annoying it is to be a band and park your van at a festival like SXSW?

Rozwell Kid was the first band that did it in a real capacity, so we had a lot to do in a little time. We had five or six shows to play in three days. The whole town is a mess: wall-to-wall people, traffic is terrible, and streets are shut down. It’s not part of the logistics of the festival planning where they have specific artists roll up and drop off their shit. I’ve heard stories of bands having their merch guy or tour manager drive around town to save themselves from having to find parking. When it’s all said and done and you’re driving through Arkansas on your way home or whatever, you feel a little bit of a sense of accomplishment for making it through the whole weekend.