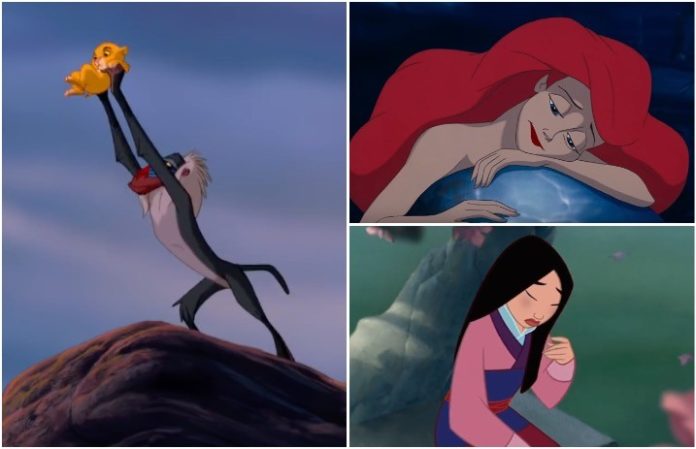 When you think emo, you probably don’t imagine Mickey Mouse ears or Walt Disney in his (alleged) cryogenic chamber. But whether it’s The Little Mermaid’s Ariel who longs for a more understanding world or the misunderstood Pocahontas, their classic fairytales deal with characters who just want people to accept them for who they are. We rounded up the most emotional ballads of all time…that just so happen to come from Disney movies.

“Betcha on land, they understand/Bet they don’t reprimand their daughters,” could be a Good Charlotte lyric, and Ariel’s epic quest to leave her underwater life behind sounds just like “The Great Escape” by Boys Like Girls. After all, parents just don’t understand. Yearning for something more makes up roughly 90 percent of all emo songs, and The Little Mermaid nails it. Ariel’s eternal outsider status cements her place as the most emo princess of all time, although she has tough competition from Mulan. And her hair can be easily recreated with the right Manic Panic dye, so she’s basically the original manic pixie dream girl.

Self-discovery is a major tenet of all emo music, and so is striving for perfection and attempting to belong. “Reflection” is a memorable ode to feeling a little out of place—but in most emo songs, they’re not talking about the Han dynasty. Can’t you imagine Paramore’s Hayley Williams belting out this iconic feminist anthem? A live-action Mulan is on the way in 2020, so expect to hear a whole lot more of this heartbreaking ballad.

Bet you never thought you’d see adult contemporary superstar and former Genesis drummer Phil Collins on a list that includes the word “emo.” But the crooner’s sad song about crying rivals any Dashboard Confessional ditty. And “You’ll be in my heart/No matter what they say” is the ultimate resilient moment. Every emo kid has a hard time giving up on first love, whether it involves a former friend, a significant other or a gorilla.

Moana’s soul-searching journey is a familiar one, although most people don’t have The Rock to advise them. Of course, Moana’s Polynesian village is far more idyllic than a suburban shopping mall, but it proves anyone can hope for more. To give this song extra street (team) cred, it was penned by Lin-Manuel Miranda, who wrote the final draft in his parents’ home. For the lyrics, he imagined he was 16 and couldn’t get what he wanted, calling it an “I Want” song typical of all Disney movies. Best of all, it was inspired by David Bowie, who he (and the world) was mourning at the time.

Finding your place and creating a legacy are both popular emo topics, but Elton John perfected them (yes, he’s the composer) with this Lion King classic. Revenge, guilt and romantic reunions—The Lion King has all the makings of one of the most emo movies of all time. (Give my deepest apologies to the former title holder, Garden State.) Plus, admit it—you cried every single time you watched the movie growing up.

Pocahontas was a definitively emo Disney heroine—no one understood her, whether it was the haunting Grandmother Willow, her animal friends or her much older love interest who thought she was an ignorant savage (rude). Of course, now we know Poco’s origin story isn’t exactly based on reality, but way back in 1995, it was a tale as old as time (although that’s obviously reserved for Beauty And The Beast). The spoken word intro when John Smith (please disregard his voice actor, Mel Gibson) says, “I’d rather die tomorrow than live a hundred years without knowing you,” sounds like it could easily be used in a MCR song.

“SALLY’S SONG” from THE NIGHTMARE BEFORE CHRISTMAS (1993)

If you’ve ever shopped at Hot Topic in your life, it’s almost a requirement you considered buying a Nightmare Before Christmas tee. Tragedy, pessimism and general ennui abound in the early stop-motion masterpiece. “The worst is just around the bend,” could be used equally as lyrics in the early aughts or a recent song. “Sally’s Song” inspired plenty of covers from sad-eyed girls and boys wearing far too much eyeliner and dressed in all black.

“DO YOU WANT TO BUILD A SNOWMAN?” from FROZEN (2013)
If you don’t at least tear up when Anna asks, “Do you want to build a snowman?” it’s entirely possible you’re as frozen as Elsa’s heart. “Conceal it, don’t feel it, don’t let it show” is basically how all emo kids get through high school and life, anyhow. It does get a little lonely, whether it’s a mostly empty castle or adulthood, making it a millennial anthem for the ages.

“GOD HELP THE OUTCASTS” from THE HUNCHBACK OF NOTRE DAME (1996)

When Esmeralda spots Quasimodo inside Notre Dame, she cries out about the experience in a song worthy of high school choirs everywhere. A song about outcasts who just want to find their place in the world and feel like no one is listening or understands? Yeah, does it get more emo than that? . Everyone needs an Esmeralda to help them out when they feel like they’re hiding their true self by sitting upstairs in their room.

Not to be confused with Fleetwood Mac’s rock anthem, “Go Your Own Way,” this High School Musical classic is from a simpler time, when the world had yet to see Zac Efron’s roided out body and Corbin Bleu was the next big thing. While High School Musical isn’t as emo as The Little Mermaid, Gabriella’s love for Troy is eternal even with space, just like all high school romances at their peak. Plus, Troy certainly had the emo swoop down perfectly.