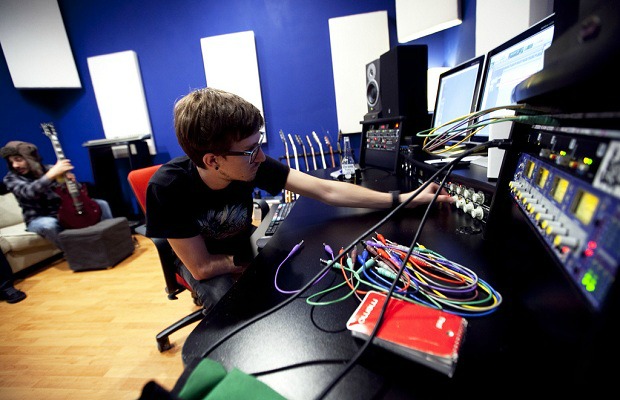 Recording engineer SAM PURA recently wrapped up his fifth episode of the WAITING ROOM, a live performance series shot in his own PANDA STUDIOS outside San Francisco, CA. It’s a new undertaking for Pura, but like his long list of recording work, the finished product is nothing short of professional. With bands like The Story So Far and Self Defense Family already having episodes to their name, Pura jumped at the chance to shoot with POLAR BEAR CLUB during their last visit to the west coast. It’s not just a living for Pura–it’s a labor of love–as he explains in this exclusive interview. While you're reading, check out this premiere of Polar Bear Club's clip below.

How did you decide the recording industry was your calling?

I started thinking seriously about a music career in high school and entertained the idea of getting a job recording music. I got a BA in Sound Arts. However, I didn’t really learn the things I wanted to in school; I just got a brief overview of all these possible audio careers and none of them were recording the music I wanted. I realized that if I wanted to really record music, I needed to drop everything and just dedicate my life to getting more recording experience. And I literally did.

I began hitting up all the local friends that I respected and offered free recordings out of my bedroom. So I got real busy real fast. Around this time, I made a record for a band that I didn’t really know or care for at the time, called Heavy Heavy Low Low [2005’s …Fuck It?!]. When we started working together we had an awesome connection and basically became instant best friends. That record got them signed to Ferret, resulting in an insane amount of bands wanting to work with me. HHLL came back to make their third record with me and have been working with Panda ever since. I appreciated how much they valued our relationship and working with them significantly influenced my style as a recording engineer and producer. I want to continue to make really powerful friendships with artists that want to challenge themselves to create unique and memorable art.

I’m now in Fremont, CA in a place that I designed and built inside of a warehouse shell.  There are bunk beds and a shower so bands from out of town can crash and record for days at a time, or just kick it and be friends. Things have been pretty natural with the growth of the studio. It’s cool to look back on and appreciate where I’m at today: thankful to be making art that matters during this tough financial time in the music industry.

What's it like in 2011 not just to be a producer at a studio, but to own and run one as well? Just looking at your discography on the Panda Studios website, it's clearly multiplied every year since 2005. Are things as good as they look? Is it a competitive market meeting the demands of bills and clients?

The goal has always been to really satisfy all my artists. I try hard to make records I want to listen to. I also aim to be a supportive team player throughout the recording experience. Artists I work with are usually really vocal about their experience with me, which gets me a lot of referrals. I also hope that I make good sounding records that inspire new people to contact me.

2011 in particular has been a difficult year for me. I've been working full time with Panda for the past eight years as my only form of income. The recording market is increasingly saturated with new kids offering their services for free. And this is obviously hard to compete with! But, raising my rates when all my clients are broke and getting offers to record for free didn’t make sense. So I got this Internet phone support job. It drained me, but it made want to really push hard on the records I made.

Now, I am back to Panda full time and I'm super thankful for my studio work. I’m now more selective about the artists that I choose to work with, and naturally more passionate about every project. I also continually challenge myself to make an impact on my artists through their studio experience and the sound quality of their records. It sounds cliché, but taking a step back really did help me to take new and better steps forward.

Running a studio comes with complete control and of course, responsibility. With that in mind, are you a do-it-all-yourself type of engineer or do you prefer to delegate work?

I’m totally DIY. I try to do it all. Even build gear and all that. I’m really driven and it’s hard for me to find people who can keep up with my high energy and tolerate my critical personality. I do have some help with booking now, so I can stay focused on the creative aspects.

I wear all the hats in the recording studio. I set up the mics, I at least try to do whatever it takes to make sounds better from the source. I operate the computer, and I drive the sessions. I’m really open to whatever an artist wants to do; because I just want to have fun in the process. I’m open to bands having cool people master their records, sometimes even mix. I don’t hold bands back from something I think will benefit their record, even when it means working with someone else.

I’m real honest and open with bands. This can be hard for some first-time artists to get used to. My goal is to get in their head to set the tone for a dedicated and serious approach throughout the session. The successful artists I’ve worked with have great stories about their experiences with me, including how my critical style impacted their dedication to their art. My job is to make sure everyone is really proud to say they are responsible for the final product.

Who are your top five influences in terms of other producers?

What do you do to differentiate yourself from the influx of other self-produced live series out there?

A live performance is a piece of art. And that art is rapidly declining with the overproduction of records. I want to be the guy to celebrate bands I am inspired by who have a natural chemistry. I decided to start doing live performance video and audio recordings to help bring the magic of a live performance to a viewer’s home. It’s my way of trying to fight the decline of the music industry and show that naturally talented artists still exist.

I started by reaching out to my best friend Jihad Rabah from Twelve Gauge Records to contact artists. Our goal is to capture the beauty of a live recording with a talented artist/band. Our sound quality is awesome and we’re about to diversify our shooting locations and episode themes.

Do you invite the bands for the Waiting Room or do they reach out to you? Or does it go both ways? It seems like in the end, both parties benefit: your studio is promoted along with the participating band.

We've invited all the artists thus far. We’re open to suggestions for any new artist, but the core staff really makes the decisions. We all have to be stoked on the artist. The entire project is DIY/free—it takes a lot of our personal time to make each episode. I want people to watch the episodes and say “Wait, that’s not a music video? You mean that band is playing that song live? That looks crazy and sounds ridiculously good.” Many bands rely on overproduction to get them by, and those artists' flaws are all visible/audible live. My hope is an artist's raw performance on the Waiting Room captures an energy that doesn't exist on their album and celebrates and inspires natural talent.

How did the whole thing with Polar Bear Club happen?

Our producer Will Levy [from The Story So Far] chatted with them about filming an episode before a show in Sacramento, CA. They were stoked and it was booked super last minute, maybe two days before the shoot. We had a two hour time slot, so they had to load in the night after a show at 2 am and track the next morning. Filming took about an hour.

It's always hectic to record and shoot an episode, but that's what a live show is about. Getting in and doing the best job you can with the tools you have. Every session is a learning experience and we make massive improvements each time. These live episodes force me to be on my toes and really commit to my gut instinct. It’s a cool challenge.

With the Polar Bear Club episode finished, can you reveal anything currently in the works?

We've got a lot of cool stuff happening. We just got an entire new video team. It’s been crazy fun. We just did an episode for No Sir which is the first release on “Family Drugs”—a new music collective that I started with Jihad Rabah. They brought in old TVs and sheets that they hung up and tagged all over. Literally looked like someone destroyed my studio. It was awesome and I’m really excited for them.

We also did Young Science, which is the electronic project of my great friend Grant Averill. He’s one of my favorite artists I’ve worked with. My feeling is if all the staff of the Waiting Room really likes each band, so will the viewers. I just want to keep working with artists who inspire me and make a series that makes people want to see more. alt