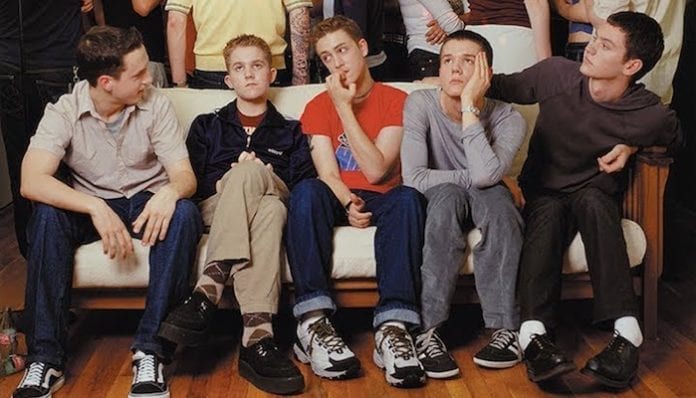 Tomorrow marks the 20th anniversary of Through Being Cool, the legendary second album from emo avatars Saves The Day. The 1999 release was massively influential to a generation of music fans who took the cues of founder/frontman Chris Conley to pursue their own artistic adventures. So who better to interview him about his creation than one of the album’s favorite fans? Enter Fall Out Boy singer Patrick Stump.

Stump has gone on record saying how much Saves The Day and TBC has meant to him as both a fan and a songwriter. (That’s why we had Conley introduce Fall Out Boy to close out the night at the inaugural Alternative Press Music Awards in 2014.) With the album approaching its anniversary, we thought we’d share an excerpt of the gents’ chat, which is running in the latest issue of AP (AP 376) later this month.

“For the people who weren’t there,” Stump begins, “I wanted to tell a little bit of the story of how Through Being Cool impacts. So it happens. It comes out. And then time passes, and emo bands are on TRL and on the top of Billboard charts. My Chemical Romance were a friggin’ Jay-Z lyric at this point. People will remember the decade that followed Through Being Cool for the haircuts and the tight jeans, and all of the cultural moments definitely have this indelible stamp of Through Being Cool. So dust settles, and culture moves on. Now we’re sitting here, and it’s the 20th anniversary of Through Being Cool being released.”

In this excerpt, Stump recalls the time when the “word on the street” was saying that Saves The Day were being groomed to be “the next blink-182.” Conley recalls being bratty to various music-industry executives and ending up at the artist-sympathetic roster at DreamWorks.

CHRIS CONLEY: It made us feel a little weird. So we’d go and have these meetings and do the wining and the dining. And then we go up to the top floor of some huge skyscraper and sit at this long table and meet with all the suits. And it was so unfamiliar. It was like we were punk rockers—we were like snotty kids, you know? We would leave those meetings and just go like, “What a tool,” just like whoever was talking with their long hair and their blazer. [Laughs.] It was just so clearly fake. And you didn’t want to hang out the whole day as soon as you met them.

It wasn’t until meeting Luke Wood from DreamWorks that we realized like, “This guy’s from our world of music. He’s from underground music. He totally gets it.” He’s a real dude that was in real bands, and we were friends. And so that’s how years later, we wound up on DreamWorks. The nice thing about DreamWorks, though, is it was technically an independent label just owned by these billionaires, but they didn’t have shareholders. So you didn’t have to please Mrs. Jones every quarter or whoever owns the stock. At that time, though, we turned all of that down. You know, you’d go into this meeting, and they’d say, “You’re gonna be the next blink-182.”

That’s funny you said that because that was the word on the street. That was the thing that everyone in punk rock was hearing at the time. [It] was like, “[They’re] getting set up now to be literally the next blink-182.” I almost liken it to the moment where I feel like At The Drive-In had this moment when they’re playing [The Late Show With David] Letterman, and it was like, “This is going to be the next Nirvana.” Everyone was setting them up for that. And then they walked away from that. Was that a conscious thing for you guys? Because obviously, Stay What You Are is a tremendously different record. It’s obviously an impactful and wonderful record, and we could have a whole other article on that. But was that at all conscious to set aside for Through Being Cool? Because it’s a very different record.

Yeah, I think if we had met the right person at that time—like if we had met Luke Wood at that time, we would have signed with him. Let’s say we didn’t meet people that felt familiar, like they’re from our world of music, and they get it there. They support artists, and it’s not just about making a profit or whatever. But eventually, we did find them in Vagrant Records. They were the same kind of people that we knew from Equal Vision. They were just on the West Coast, and they had a slightly bigger operation at the time. And that felt comfortable. The Get Up Kids had signed to Vagrant.

It’s interesting to think back if we had signed to a major label based on Through Being Cool. I think they would have wanted us to keep making that same record to make it a brand. And I think for me as a songwriter, I just would have flinched at that. And I wouldn’t have made it through that. I just would have given it all up.

But for me, it was so impactful that you changed because that was a thing that felt implicit to me. All of my heroes did that. Elvis Costello and Bowie and Prince: They would always change. But I feel like punk rock didn’t really seem to reward that at that point. How pissed were people about Stay What You Are after Through Being Cool? Were they pissed?

Oh, my God, yeah. It was everything. And it made total sense when you’re 15, and then you look back, and you’re like, “Well, wait a second. If I know that making the same record over and over again is what would make money, why would I think not making that record is the sell-out move?”

Right, right. Yeah. That’s funny. That’s a really good way to look at it. That’s what you tie up with a bow.

Read more: Saves The Day explain how ‘It Chapter Two’ ties to ‘Through Being Cool’

Order the next issue of AP with the entire seven-page interview here.