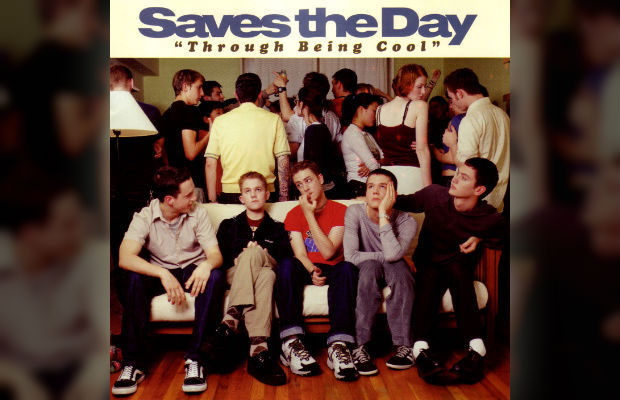 It doesn't matter who you are, where you've been or what you're doing: If you walk into any room on the planet and tell someone you love Saves The Day's Through Being Cool—and  that someone knows what you're talking about—you  better settle in for a long night. Because if nothing else, you're promised to have an invigorating, passionate and extensive conversation about precisely how influential that album is, was, and forever will be. Coming off 1998's Can't Slow Down and 1999's I'm Sorry I'm Leaving EP, nobody saw this coming. Nobody could have ever predicted  that Chris Conley would go on to write an entire album filled with the purest form of battle cry. It would end up speaking to every heartbroken and angry teenage mind to ever button up a pair of skinny jeans, and it would ultimately not just pave, but bulldoze, the way for the pop-punk boon of the early 2000s that rode the rising waves of Fall Out Boy, My Chemical Romance and Taking Back Sunday, among many, many others.

Now, as Through Being Cool turns 15 on Nov. 2, Alternative Press caught up with the current members of the band to reflect on what went into recording the album, where it sits among the rest of the Saves The Day catalog and, of course, how it feels to craft a perfect record.

Have you listened to Through Being Cool lately from front to back?
CHRIS CONLEY: Oh my God, I should have done that before this interview.

ARUN BALI: I did within the last couple of weeks.

CONLEY: And Dennis, you said you'd been listening to it?

DENNIS WILSON: Yeah, I did yesterday. I was rehearsing for the tour.

CONLEY: Is that because you love it so much? Oh yeah, it was rehearsal, right. [Laughs.]

BALI: We have some cool things in store for the anniversary, so I went through the record.

And what do you think of it now?
CONLEY: I think it stands up very well. It stands the test of time.

PALMA: Every time I listen to it, there are songs that stick out to me. The record definitely felt like it was the turning point in where melodic hardcore was going. It was kind of like, “This is the way forward.” I think the fans sometimes call it pop-punk, but to me, it's just like a great melodic rock record. There are a lot of things that draw from a lot of references and influences and it just makes for a cool record. It's a cool listen.

BALI: It's funny how production values have changed, too. Through Being Cool is such a raw-sounding record. Fifteen years later, I still tend to prefer something like that, [something] that has an organic, raw feel. For me, it holds up.

CONLEY: It's still pretty fresh-sounding. It's like you can press it after the fact. Print it, baby. Print it. I'd imagine if I'd heard it recently, I'd be like, “Damn, this is so good.” [Laughs.]

Do you guys each have a favorite song on the record?
CONLEY: I like them all. I do want to say that I like them all. I remember that album fondly and I remember every Saves The Day album fondly because they're all good. But I think “Holly Hox, Forget Me Nots” was the most forward-thinking song at the time. It didn't really sound like where we were coming from on Can't Slow Down at all. It sounded a lot more like Foo Fighters. And I think the band has continued to evolve into more of a pop-rock band and less like a hardcore punk band. In the years after Through Being Cool, I think “Holly Hox” connects the dots.

RODRIGO PALMA: I love playing all the songs on that record. They're super-fun. They bring me back to a time. Not even a time, but like an essence or a spirit when things are raw and it was just exciting to be playing music. So, that's cool. It feels very honest and emotional. I love “Holly Hox.” I also love “The Last Lie I Told.” I just think that's a really cool song.

BALI: The song “Through Being Cool” has a cool new wave, post-punk feel to it. Like what Rod was saying, re-imagining some of these songs live, a song like “My Sweet Fracture,” which I know means a lot to a lot of people lyrically. For us, the way we've been approaching it now… it's been fun to take a song that still has the spirit of 15 years ago, but then turn it into something that we would do today. “The Last Lie I Told” reminds me of a lot of post-hardcore stuff I would listen to back then.

WILSON: “Last Lie” is by far my favorite. We were just practicing one day and randomly broke it out in the studio and I remember realizing how awesome the structure of that song was. It makes me smile every time I hear it now.

Chris, I talked to you a few years ago for a different article somewhere else. We were talking about this record and you told me these were battle songs. Do you still feel that way when you listen back to these songs?
CONLEY: I don't remember saying that and I definitely don't remember feeling that way at all, but that's so funny, how you change over time. It's like, I maintain the right to change my mind at all times. [Laughs.] I would say looking back on them… if anything, that's probably coming from feeling sort of uncomfortable with people heckling at shows and having so much fun playing music and just wanting people to shut the hell up and let us play our songs. But the music has nothing to do with that. You listen to the lyrics and it's just like this lonely guy, who was longing for something more. The record has a lot of melancholy, which would play out in the years to come. But the songs are all very exciting, full of life. And I think I was still a little naive, so it has this innocence to it. So, I don't connect at all with that statement; I want to fight that guy that said that, because he's an idiot. [Laughs.] I would like to strike that from the record: I don't want to fight that guy; I think he was doing just fine.

Do you remember recording the record? Where there any stories that came out of those sessions?
CONLEY: I remember it very clearly. We recorded it in 11 days. Nine days and then two half-days. And that includes mixing. So, it was a whirlwind. To make a record like that today, people think they're rushing, but we were just having a blast. We were doing all-nighters, trying to get it all done. So, we would stay up all night, chillin' in the control room and sleeping on the floor in a lounge. We would rent movies from this ancient place called Blockbuster Video. It was sort of like a retro-modern library. We would go through movies that had multiple sequels, like A Nightmare On Elm Street or Friday The 13th, and we would just put one on after another. Tracking the record was a lot of fun. We were just kind of really psyched on how the songs were sounding. I remember how excited we were when the songs would come together. We were all really giddy about it. We were all doing college and at the time, we just finished the spring semester. [original STD drummer] Bryan Newman and I looked at each other at one point and I think it was when “Holly Hox” was coming together in the studio, and we just realized, “Hey, this is going to be really good, and we should just take a year off school and just tour.” Because we had been touring only where we could during that first year of college. So, we decided to just go for it because the songs in the studio just sounded so bitchin'.

Did you have any sense after the recording was done that it would be as special a record as it turned out to be?
CONLEY: I guess not in the context of time. I didn't know that 15 years later, we would be talking about it and people would be citing it as a major source of inspiration. But I could definitely feel how good it was. It felt fresh and exciting and awesome. It had a lot of energy. The songs are really cool. And it's very different from what we had done before with Can't Slow Down. So, I was on fire about it.