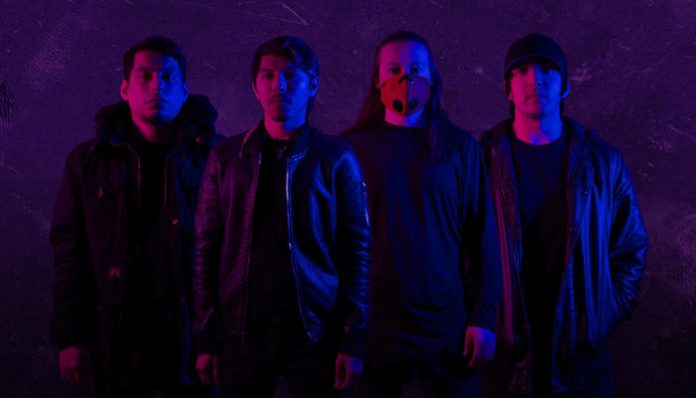 Loyal metalcore stans will undoubtedly remember the power of Scarlett O’Hara, the south Texas outfit who made a wicked record (Lost In Existence) for the mighty Rise Records label in 2010. When the band were released from their Rise contract, they decided to disband on good terms.

Then in 2017, Scarlett O’Hara—guitarists Logan Burns and Alek Samodouroff and drummer Arnie Bernal alongside new vocalist Moses Lopez—felt they had both the songs and the spark to reconvene. Last year, they ended up writing, recording and self-releasing a new album, Welcome Back To The Brodeo, and hitting the road.

Read more: Watch Bring Me The Horizon dust off their old deathcore songs.

Currently embarking on what they are hashtagging the “#2KNineScene West Coast Tour,” Scarlett O’Hara aren’t trying to relive any kind of glory as much as they are enjoying each other’s company and the music they are making. (Burns, Samodouroff and Bernal have been roommates for a decade in the same house, which says something about their friendship.)

Jason Pettigrew spoke with Burns about Scarlett’s backstory, how business didn’t affect friendship and why nostalgia is the last thing on their minds.

Correct me if I’m wrong, but the title of the album Welcome Back To The Brodeo feels like an inside joke and a statement of purpose.

LOGAN BURNS: That’s a nod to our fans and everyone that has stuck around. Just to hint at the fact that it was a return to form in the sense we were trying to not necessarily go the route that a lot of the metalcore groups at the time in 2013 were doing. A lot of it was kind of the hope that the more nü-metal influenced stuff or the hardcore kind of slam stuff that’s going on. We wanted to evolve our sound and work where we left off with Lost In Existence. [The album] was influenced a lot by that first CD and incorporating a lot of stuff that we were just wanting to do in those 10 years since.

What are you doing musically now that you probably should’ve done back then?

Our sound is just more evolved. It’s more defined and personalized to who we are. You know, as musicians on our first two records, we were working it out. We were 16, 15-year-olds at that time and then [when we signed] on Rise, we were 18. We really didn’t even know who we were too much as musicians. And so now going 10 years forward, we are really able to pick up where we left off.

Read more: August Burns Red say new music will be “easier” for fans to listen to.

Warped Tour is gone, and it seems like many of the metalcore bands have changed, trying to get in the faces of people who are working the third shift in their town’s car manufacturing plant as opposed to being part of a scene.

Yeah. SiriusXM Octane radio and all that kind of stuff.

Despite this climate, are you seeing the continuation of that musical community Scarlett O’Hara came up through?

Yeah, definitely. The only difference I think is it’s not so concentrated to like a niche deal. Back in its heyday, it was primarily people that were into the scene. They would call us “the scene kids” back in the day. Now at these shows, you’ll see kids that [look like that] and a super-hardcore band that you definitely wouldn’t think that would be into Scarlett O’Hara. It’s more open. I think [audiences] like a whole lot of genres, so that falls within our branch.

I definitely feel like there is a community. We’re really blessed to be in an area that have a super, super-thriving scene down here and in south Texas. On any given weekend, you’ll get 300 people out to a local show. We love playing here all the time, and it was a big reason as to why we got back into it.

Was that the impetus that made you want to get in the same room with amplifiers?

It’s hard to stop doing what you love. As cliche and corny as that is, those two dudes have lived with me basically forever. We’ve been roommates for like 10 years, even when we were in the band. We never wanted to stop in 2010.

Read more: 12 albums that formed metalcore in the early 2000s

The circumstances forced it?

I believe what it was was label personnel changing at [Rise]. I think ownership changed. They released a lot of bands that were on their roster, and unfortunately, we were one of them. It took away that ability to tour and everything. We never intentionally wanted to stop doing it. They used to be a super-stacked metalcore label. It was jokingly called “Rise-core” at that time.

So Scarlet O’Hara are business as usual, with a new musical consciousness to it.

Absolutely. And prior to that, even before the band started, we were all buddies. It’s always been a buddy thing.

The band are currently on Welcome Back To The Brodeo tour with Sleep Waker and Somewhere To Call Home. Tickets are available here with dates below.