Arizona post-hardcore team Scary Kids Scaring Kids will hit the road for some East Coast dates this summer. The tour commences June 27 in Chicago, ending in Worcester, Massachusetts July 12. The response to the band’s first tour since 2010 was overwhelmingly positive: Fans sold out the majority of dates, thereby making an East Coast campaign more of a reality than a proposition.

“Going into this, we were going with the idea that, ‘We’ll do this and it will be fun for us. But does anyone actually care?’” keyboardist Pouyan Afkary tells AltPress. “But we were really happy to see the turnouts and the amount of energy that was there.” Afkary says the band scheduled more dates for their summer run than they initially thought they would.

“We were blown away by the whole experience,” drummer Peter Costa adds. “We heard that there were people who flew either across the country or from out of the country to go to some of the shows. Some people flew [to the West Coast] from Canada. For us, just the experience of all of us together again was pretty exciting. We’ve invested a lot of time away on the things we’ve been working on to make this happen. Pouyan and I are very active in the technology world, and we’re looking forward to summer where [the band members] can hang out again and everyone can have a great time with us.”

Prior to the first date, Afkary was lowering his expectations right out of the box. He figured once the band had played everything from their 2003 EP After Dark and their first album, 2005’s The City Sleeps In Flames, people would hang out at the bar or not look up from their phones.

“They were singing to every single song, including ‘Loved Forever,’” he says, sounding like he’s never gotten over the shock weeks later. “People were just belting every song, from the beginning to the end of the set.”

We’re pretty sure the universe gave Afkary’s concerns a deaf ear. For all intents and purposes, the Scary Kids 2020 experience carried momentum. Their not-so-secret weapon Cove Reber (Dead American, Saosin) was completely stoked to be there. His enthusiasm and exuberance fronting the band was a win for both the band members and the audiences.

First show back with the fam in 10 years. A lot of emotions, but mostly feeling of love in the room. Thanks to everyone singing their hearts out. 1.13.2020 // Orangevale, CA 🎥 @throwninthefire

A lot of these fans had some great stories. Akfary and Costa experienced everything from longtime fans they knew on a first-name basis and Facebook acquaintances from the band’s heyday. Some attendees admitted to not being a show “since forever,” Akfary says.

“These people were in their thirties and in the mosh pit, with no regard or idea of how they might feel the next morning. [Laughs.] There were also people who brought their kids, who are now aged 13 to 15 now. ”The band were also shocked by the number of people who had only recently discovered them. “having so many new people be part of it is such a cool thing.”

Those feelings of respect and responsibility were key to the entire tour. But it was important to Scary Kids Scaring Kids that they pay tribute to their former frontman Tyson Stevens. His passing in Oct. 2014 at the age of 29 had significantly impacted people on both sides of the stage. The band felt the best way to celebrate Stevens was to pay it forward. Scary Kids extended an invite to Chad Moses, the director of outreach and experience for the non-profit To Write Love On Her Arms. Moses accompanied the band on the tour speaking briefly from the stage and later talking with fans who may be struggling with assorted issues.

“The Phoenix show was an emotional one,” Costa recalls. “Tyson’s brother and sister came out. Tyson’s brother looks a lot like Tyson. I introduced him to Cove, and Cove said to me later, ‘I didn’t have to ask who he was.’ That night we played ‘Loved Forever,’ and I was trying not to break down. There was a part later where we dedicated the set to Tyson and everybody in the crowd [was] raising a glass or shouting his name. You don’t normally feel those emotions at a rock show. Those are emotions you feel by yourself that are solely intimate.”

Read more: 10 Bands who should reunite after My Chemical Romance

“The makeup of that show was friends, family and then others,” Afkary recalls. “There were people from the same friend group Tyson and myself were in. A few of the guys were in their trial phases. Back then, we we were all experimenting; taking shrooms for the first time, trying weed, just experimenting. So I was thinking about the opioid crisis, and how oxycodone was so easy to access for all of us. I saw some of those people in the crowd who struggled with that stuff and had gotten clean and now they were at a point where they had a brother or a friend who had passed from it. It was an intense emotion.”

While everything within the Scary kingdom is currently awesome, there are fan expectations that need managed. After a successful first run on the west coast and with an east coast trek this summer, there is that inevitable question…

“If you’re asking if there are plans for another album, the answer is no,” Afkary says flat-out. “That would take another writing 10 songs together. I think that would be awesome. But I had gotten a little warmer to the idea [of making new music] before the tour in January, It would be cool, but I don’t know how it could work.”

In the end, it doesn’t matter. Why?  Scary Kids Scaring Kids didn’t have their dreams come true as much as they had their realities fine tuned. While their end was marked by sadness, it didn’t mean they had to continue to postpone joy. Costa remembers the great sense of serendipity at play on a nightly basis. And he’s looking forward to the recurring deja vu feeling.

Scary Kids Scaring Kids will resume celebrating 15 years of The City Sleeps In Flames at the end of June. Reber will return on vocals, and the band has recruited the Classic Crime, Picturesque and Eidola as support.

Tickets and VIP packages will be available here, and you can see the full list of upcoming shows below. 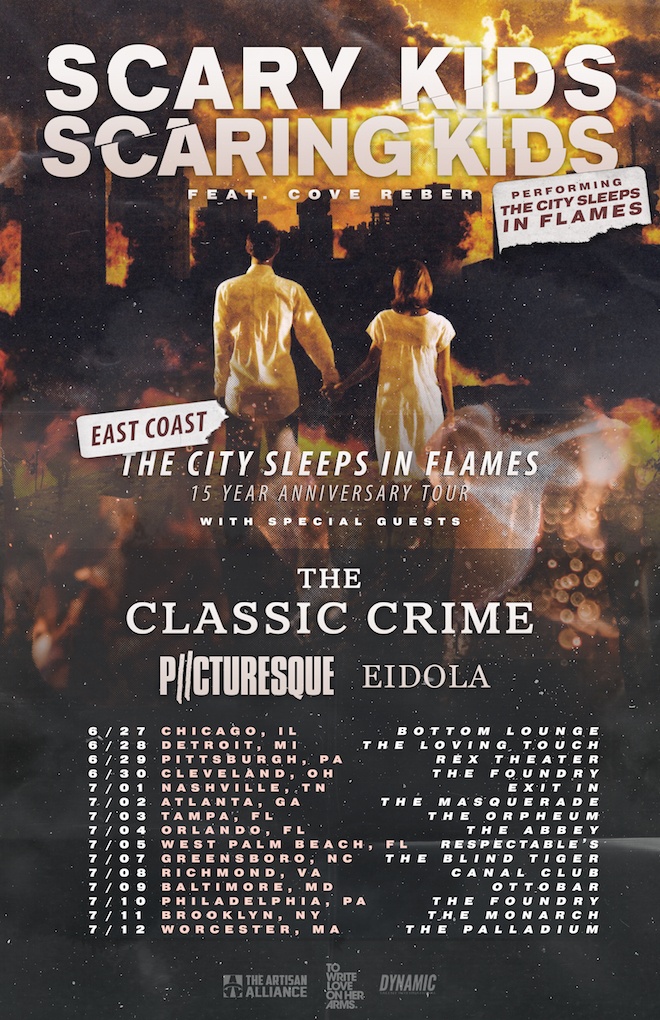