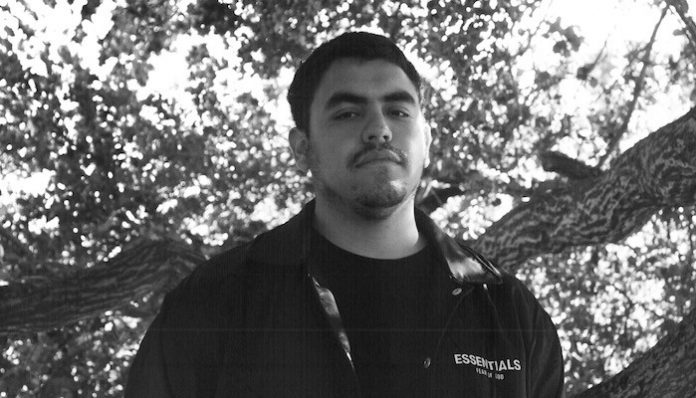 Scarypoolparty, the brainchild of Alejandro Aranda, just unleashed his latest single, “DIAMONDS,” last week. Now, the singer-songwriter is teaming up with AltPress to share the gritty visuals of the skate shop-set video.

Best recognized for his time on American Idol season 17, Aranda solidified himself as a creative force from the first day he graced the country’s screens. Beginning the competition by auditioning with an original song, “Out Loud,” he earned a ticket to Hollywood and a standing ovation. In fact, judge Lionel Richie requested a second performance, with Aranda delivering another original in “Cholo Love.”

While Aranda did opt into the covers, tackling everything from Post Malone’s “I Fall Apart” to Queen’s “Under Pressure,” the vocalist performed an original seven times throughout his run. Setting himself apart with his uniqueness, Aranda made it to the finals where he placed second.

In June, Aranda unleashed his first post-Idol single, “Tonight,” under Scarypoolparty followed by “Cholo Love” in August. While his past singles are more reminiscent of the genre-blending of Malone, Scarypoolparty’s latest “DIAMONDS” takes a hard left into industrial-rock territory, harkening the vibe of Nine Inch Nails.

With a clear influence from idol Trent Reznor, Aranda explains how another genre stalwart is to thank for getting the creative juices flowing. “I’m a lifelong Ministry fan,” he says. “I wanted to create a song that had a similar industrial-rock sound and was heavy on synthesizers.”

Aranda’s roots bleed into the visuals as well. Having attended plenty of gigs at skate shop Programme Skate & Sound in Fullerton, California, the musician wanted to channel that into the new video. “The hardcore music scene inspired this video,” he says. “I used to see a lot of shows at the Programme Skate & Sound, so I wanted to shoot the video at my old stomping ground.”

Like Scarypoolparty, director Laban Pheidias wanted to make sure to really home in on those underground gigs.

“Knowing that Alejandro grew up going to shows at Programme Skate & Sound, I wanted to radically pay tribute to that and create a live performance that no one would forget,” the director explains. “This video represents the hardcore passion and in-your-face energy of [the song].

“As always, we had a skate and punk-rock approach to filmmaking. While one of my DPs was getting knocked around in the crowd, the other was literally holding an old-school VX1000 with Death Lens in one hand and an HVX in the other. This attitude translated into the final video as I chose to highlight the rawness, grit, sweat, grime and glitches—all the wonderful flaws.”

You can check out “DIAMONDS” here and the new video below.

While Scarypoolparty is hard at work on his debut album, the musician also has a busy couple of months ahead with a packed tour schedule. First up, he’ll be playing an impromptu acoustic solo set at The Hotel Cafe in Los Angeles tonight at 10:30 p.m. PT. Tickets are available here.

After making his full band debut at Lollapalooza in Chicago in August, Scarypoolparty will be kicking off his first-ever headlining tour in the U.S. this week. With several dates already sold out, morgxn, Sucre and Twin Shadow join as support across select shows. Following that, he’ll be hitting the U.K. in December and Mexico next year. You can check out the full list of dates below with tickets here.

* with morgxn
% with Sucre
! with Twin Shadow