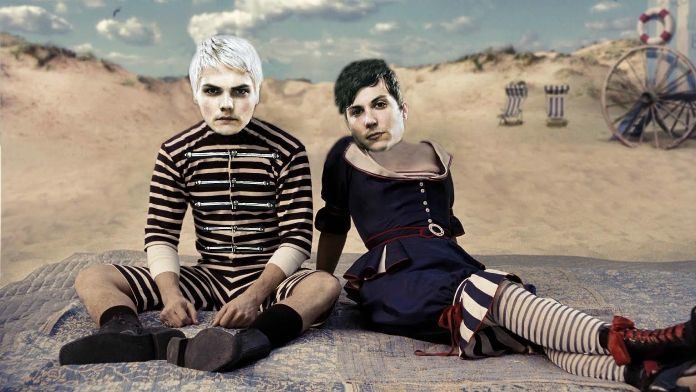 Forget the Royal Wedding: The most exciting news coming out of the U.K. right now is that of Green Day’s smash hit Broadway musical American Idiot making its way to the British Isles in 2019.

With theaters across the U.K. set to be wowed by the story of St. Jimmy and Jingletown, we got thinking about some of the other scene albums that could do with getting the musical treatment. From Panic! At The Disco to Palaye Royale via Black Veil Brides and Bring Me The Horizon, these are the records we want to see lighting up Broadway in the future.

The latest All Time Low LP is the first time Alex, Jack, Zack and Ryan have got conceptual on us, with Last Young Renegade loosely following the story of two young lovers as they navigate their way through life. It’s that storytelling, combined with ATL’s most diverse and accessible material to date, that makes us think that Last Young Renegade would make for quite the spectacle on the stage.

BLACK VEIL BRIDES – WRETCHED AND DIVINE: THE STORY OF THE WILD ONES

Probably BVB’s stand-out moment so far, Wretched And Divine has already fostered a short film, so the leap to a full-blown musical isn’t as big as you might think. With dramatic ballads such as “Lost It All” and bona fide rock anthems in the shape of “In The End” and “I Am Bulletproof,” the story of the wild ones is one that could easily follow in American Idiot’s footsteps.

BRING ME THE HORIZON – THAT’S THE SPIRIT

Bring Me The Horizon took a giant step toward the mainstream with 2015’s That’s The Spirit, and having teamed up with the Parallax Orchestra to record their 2016 Live At The Royal Albert Hall album in aid of Teenage Cancer Trust, the Sheffield rockers have demonstrated a desire to take the band into musical territory away from the confines of the scene. Hearing ambitious cuts such as “Follow You” and “Doomed” arranged for musical theater would be pretty cool.

CREEPER – ETERNITY, IN YOUR ARMS

Southampton, U.K. goth-punks Creeper have probably already discussed the prospect of turning their songs into a musical, such is the creativity and ambition of Will Gould and his Callous Heart cohorts. The thrilling tale of James Scythe and the musical twists and turns of Eternity, In Your Arms would be right at home on Broadway. With My Chemical Romance currently out of the picture, it’s down to Creeper to bring those gothic overtones to a wider audience. Speaking of which…

MY CHEMICAL ROMANCE – THE BLACK PARADE

This one’s a no-brainer, and we’ve reported in the past about how serious discussions have taken place about adapting what is arguably our scene’s most iconic album into a musical. The Black Parade Is Dead! live album and DVD showcased the grand potential MCR’s third album has in terms of visual spectacle, and we all know how fucking brilliant those songs are. Sooner or later, this is bound to happen.

They’re one of the most artistic new bands around, and having already graced the cover of AP, we know just how much Palaye Royale would love to see their music take to Broadway’s stages. Remington Leith, Sebastian Danzig and Emerson Barrett would no doubt lap up the opportunity to turn their debut record into a musical, and such is the carefully curated vision they have for their band, it’d likely turn out to be a pretty awesome show.

PANIC! AT THE DISCO – DEATH OF A BACHELOR

Brendon Urie’s already dabbled in this arena via his appearance in Kinky Boots, so why not turn his own music into a Broadway show? Death Of A Bachelor is packed with croon-tastic jams including “LA Devotee” and “Impossible Year” that’d easily translate into a musical theater setting. Urie’s massive vocal range means it’d be a piece of cake for him to star in such a production, too.

The narrative behind Blurryface is another tale destined for greater things than a mere album. Adapting Tyler Joseph and Josh Dun’s alt-pop tunes into those fit for a Broadway stage would be quite the feat, but if anyone’s capable of pulling it off, it’s these guys. Whilst we’re at it on the TOP hype, how about another record soon, lads?

THE 1975 – I LIKE IT WHEN YOU SLEEP, FOR YOU ARE SO BEAUTIFUL YET SO UNAWARE OF IT

We’re in a grip of 1975 fever right now, with the U.K. indie rockers’ imminent return getting us seriously buzzed for whatever melodic madness they’ve got in store. ILIWYS… is an LP brimming with the kind of adventurism that’d make for a killer musical, and like many of the other artistically ambitious and visionary acts who have made it onto this list, we just know that Matty Healy and the boys would love to see their music take on a whole new life.