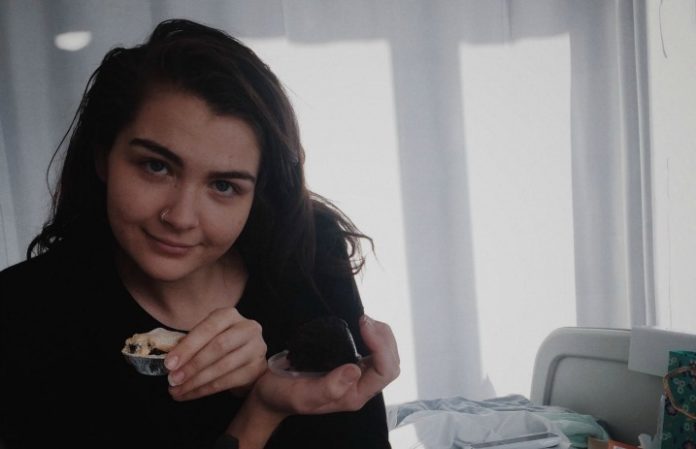 Ashley Osborn has only been shooting for a few years, but she’s established herself as a staple of our scene. Name a band and there’s a pretty good chance she has taken photos of them. A three year Warped Tour vetrand, her subjects include everyone from Pierce The Veil to Bring Me The Horizon to Emarosa, with many more in between. Magazines and websites have used her images and more than a few record labels have hired her.

While on tour in Europe this fall, Osborn started developing significant pain in her arm. But what first was manageable as a simple strain, became life-threatening after being diagnosed with thoracic outlet syndrome. While she is currently out of immediate danger, her condition has prohibited her from taking photos.  A GoFundMe account has been set up to cover medical expenses for her until she fully recovers. But while she was rightfully scared with the uncertainty and fear surrounding her condition, the overwhelming support of the community that she documents has helped ease some of the financial and psychic burdens she was facing. When word got out of her medical situation, support came in from bands, industry people and most importantly, fans of her work. In 24 hours the $10,000 GoFundMe goal was exceeded.  A community came together to support one of its own, without the need for reciprocity. Lots of bands in our scene talk about “having heart.” But nothing beats seeing our community in action.

Osborn spoke with AP regarding the origin of her condition, her treatment and the support she has gotten.

When and how did you first know something was wrong?
It's been weird. A few years ago, I was diagnosed with carpal tunnel by a doctor. Never thought much about it because it was so minor. Over the summer on Warped, my wrist was acting up a lot and since I've been wearing braces 24/7. My pinky and ring finger would frequently go numb when it was very cold, but I just wrote it off as bad circulation.

When I was on tour in September/October, the pain in my wrist was getting much worse, but I was taking lots of ibuprofen, icing it, tiger balming and still wearing braces. It was totally manageable.

When I flew home after tour, my hand immediately got worse. My pinky and ring finger were numb and my upper arm was painful. Something felt off, but I still thought it was carpal tunnel. I couldn't afford to not tour, and it was manageable, so I just went to Europe. It was so stupid of me, but my mentality is work. I've never bailed on a job or left a tour in my whole career.

“A lot of beauty has come out of something so traumatic. I had so much time to think and appreciate things. It's shown me who truly cares and it's made me really cautious about health.”

You were on tour  in Europe when you first checked into the hospital. Can you walk us through what happened next?
Once I got to Paris to start tour (October 26), my thumb went completely numb. I thought it was just the weather. I shot our first show in Paris and that night I woke up screaming because my entire hand had gone cold. It was the most painful thing I have ever experienced. The next day in Spain, I spoke with our promoter and he, our tour manager and myself decided that I needed to go to the hospital. I went the next day in and no specialists were available because it was Halloween (a national holiday in Spain). So they did an x-ray, sent me on my way and I went to the same hospital chain in Barcelona.

Barcelona doctors said it was carpal tunnel and all I needed to do was teach myself new ways to shoot so it wouldn't be painful. They told me to take a few days off and let the swelling go down. That didn't work… I was still in the most excruciating pain I've ever experienced.

I made the difficult decision to leave tour on October 7 and went to the U.K. from Munich. I made the decision for two reasons. The first being I wanted to try and heal up to finish the U.K. portion of the tour. The second being everything inside my soul—so dramatic, but seriously—was telling me to not go home. I didn't know why. But I know now that if I would have flown, I would have most likely died.

When I got to the U.K., I waited a week in Manchester and was still in unbearable pain. I could no longer bear it. I made another appointment with a private doctor. He referred me to a private orthopedic specialist in Leeds. I went to see the specialist on the 22nd. His name was Doctor Farnell and he is a saint. He took one look at my hand and was like, “this is much more than carpal tunnel.” He was incredibly concerned. He booked me an urgent ultrasound and another test on my nerves. He thought it was nerve damage, but he knew it wasn't CTS because of one specific motion I could not do with my thumb. I left feeling hopeful and I had actually gotten on the phone with a fellow photographer friend who had dealt with his entire arm going cold. I thought physical therapy would be the fix.

The hospital called me the next morning and I went back to Leeds for the ultrasound. During the ultrasound they found the blood clot and told me I had nearly no pulse or blood flow in my arm. Twenty minutes later, I was in the hospital across the street, Leeds General Infirmary's, vascular department emergency room waiting to be seen. The clot had broken off and spread down my entire arm. I was eventually diagnosed with thoracic outlet syndrome due to being born with a cervical rib in my neck. Something about one in 150 people are born with. I was in intensive care and in and out of surgical operations. Between heavy clot dissolvent and surgeons manually going in to do work, 70 to 80 percent of my blockage is gone. The rest of the clots can't be removed due to how close to my hand they are. Now it's a lot of physical therapy to repair my nerve damage and waiting to see which parts of my hand return. I still have no feeling in my shutter finger.

So many people in the scene from artists to people from labels to others in the media have come together to support you. How did that feel?
I really can't wrap my head around it. The last two weeks don't even feel real. A lot of beauty has come out of something so traumatic. I had so much time to think and appreciate things. It's shown me who truly cares and it's made me really cautious about health. I want to start raising awareness for TOS. I'm just thankful. That's all I can say.

“It's just made me feel like the last six years that I've dedicated to the scene have mattered. Truly. And it's just reminded me that I can't stop. I have so many things I want to accomplish, and now I feel the most supported and loved I've ever felt.”

The page has raised the entire goal in just over a day. Could you have ever imagined that kind of response?
I was hesitant to ask for help because I didn't want to be judged. I feel stupid. I'm so stubborn, and it took me so long to admit I wasn't okay. My close friend, Mike [Ziemer], has been one of the people closest to me through this and he convinced me it was okay to ask for help. It feels good to let my guard down. I never expected anyone to care.

I don't want a pity party. But after this happened, quitting photography was the first thing on my mind. I just didn't see myself coming back from this. I was sitting there just wanting to crawl into a hole. Even now with my hand coming back and my shutter finger being the only numb finger. It's so hard to keep my head on straight. It's just made me feel like the last six years that I've dedicated to the scene have mattered. Truly. And it's just reminded me that I can't stop. I have so many things I want to accomplish, and now I feel the most supported and loved I've ever felt.

You will also be selling some prints to help raise money to take care of your medical bills. Where can people get those? What will you be selling?
A little bit of everything and some BMTH and Pierce The Veil Polaroids. Still a lot of planning, but I want to have several artists on there. It will be live this weekend here!

Anything else you want to add?
I really quickly just want to thank Dr. Farnell and his team at Nuffield Health in Leeds. He came to see me in the hospital when he found out what happened. The receptionists that walked me to the emergency room. Everyone who had part in my care at Leeds General Infirmary wards L15 and L7. The nurses and consultants in Radiology Theatre. The care I received was the best ever. No words. I felt like I made friends and family.

Thank you to everyone. It's all so overwhelming. alt

To support Osborn donate to her GoFundMe page here or purchase prints here. Check out her work here.