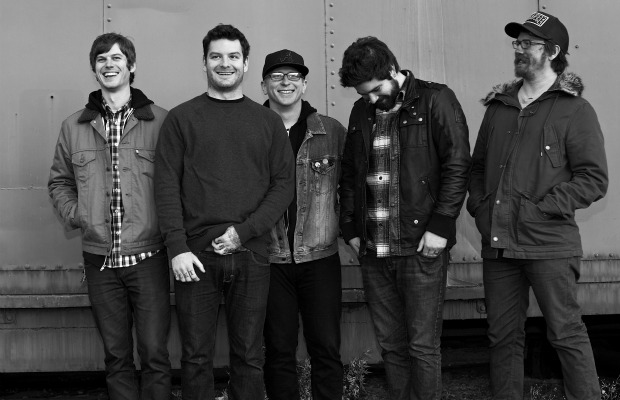 With a decade under their belt as a band, Senses Fail are gearing up to release a greatest hits record—or, as vocalist Buddy Nielsen calls it, “a compilation of songs people prefer more than other ones.” (Don’t view this as a career coda, however: Nielsen says they’ll be recording a new full-length in the fall, which should be released in 2013.) The band are currently wrapping up recording four new, original songs for the June release in Baltimore with producer Brian McTernan.  And according to Nielsen, Senses Fail completists might want to jump on purchasing this release early. “We’re only printing 10,000 of the CDs. I know that people don’t really collect CDs, and the point wasn’t something that we were going to send out to retail. It’s more like, ‘Hey, we’re going to do this and bring it on Warped Tour. It’s going to have some new songs on it, so if you’re on Warped Tour, you can get it. It’s going to be five bucks.’ And then it’ll just be online, too.”

Several weeks ago, Nielsen chatted with AP about Senses Fail’s influence, their attitude towards writing music as they’ve grown and how they feel they fit in with the modern music scene.

You guys have been a band for 10 years now. Do you feel any pressure to try and not repeat yourself? How are you keeping it fresh for not only the fans, but for yourselves as musicians?
It’s always a struggle to write good songs. They just have to be really good songs. It doesn’t matter if they’re in the same style that you’ve written it in or in a different style, as long as they’re good songs. We’re definitely going to try to push ourselves. The thing is, we don’t have most of the same songwriters, so it’s going to sound a little different. But then again, it’s always going to sound like Senses Fail as soon as I sing over it.

The good thing and the bad thing about being a band is that if you’ve been a band for 10 years, you’ve probably been pretty successful and people like you, but it’s hard for you to try new things because it’s like, “What are we really going to do that’s going to blow people’s minds, while still appeasing people that like the band?” The goal is to write really good songs. I want people to hear them and go, “That’s a really good song. That’s really catchy. It’s well-written. The lyrics are good. Everything sounds good.” Good songwriting spans across genres; most people who like music can appreciate a good song.

It’s hard for me to objectively be like, “Well, these sound different than other ones,” because I don’t know. I have no idea. I’ve stopped paying attention and judging that stuff. I just go, “I like this song. Maybe people will like it. Maybe they won’t.” There’s not much I can do about it other than do my best to try to make it something that I feel good about.

Definitely. There’s a point where you just have to go, “I like this song. I think it’s worthwhile, and if they don’t like it, that’s okay—I did what I could as a musician.”
Exactly. The songs definitely have a more ’90s vibe to them—like a late-’90s thing to them. There’s one song that we took heavily from Engine Down. Then, of course, there’s stuff that just sounds like Senses Fail. Matt [Smith] from Strike Anywhere is writing with us, so there’s definitely a bit more of an upbeat vibe to things—a little more punk vibe to how things are going. We’re just trying to bring back some of the ’90s feel of how things were when we first started writing music. I don’t want to say re-create what we did in the beginning, but definitely staying away from more of the metal/heavy stuff that we’ve done. That’s a thing of the past. If the band is going to do anything heavy, it’s going to be way more darker, Engine Down stuff that’s melodic and dark and it’s heavy, but it’s heavy because of the mood it’s set in, not necessarily [the music’s construction].

What are you doing lyrically this time? What topics and themes are you covering?
It’s a lot more positive. Every record is about where I’m at in my life, and right now I’ve got a lot of good things going on for me. I’m in a great relationship, I have a great job and I have a lot of exciting things going on. A lot of it is reflecting on how lucky I am and being positive.

Many veteran musicians I’ve talked to or read about lately are at that place. They’ve been in bands for 10-plus years, and they’re doing other things that are successful. And so with the music they’re making, their focus is just like, “You know what? I am really happy right now.”
Yeah, definitely. I just don’t really give a shit. Anything Senses Fail does is deemed as a success, because I have other things paying the bills. So I’m at a place where it’s like when I first started the band and it didn’t really matter. You end up becoming successful and it becomes your only way of living and then you’re like, “Fuck. This now becomes so much more stressful.” Now, if we put out a new record and it doesn’t do that well, it’s whatever.

I think people are still going to like to see the band because we’re current. The people we choose to tour with we make good decisions on. I’m heavily involved in other aspects of music. I think people see that and it’s not like Senses Fail is completely irrelevant to modern music and the modern scene right now, but we might not keep putting out new music that excites people constantly.

It gives you that ability to branch out. Like you said, you can go back to that youthful abandon where you can just write the songs you want; there’s not pressure to pay your bills with how well the record does. You’re back to that first step where you can write songs that you’re in love with while hanging out with your best friends.
Yeah and we can have a good time with it. There’s no pressure of “Well, are people going to like it? Are people not?” because we already have that foundation. We actually sell more records of our old songs than of our new stuff. People are still getting into the band and discovering some of those old records. Luckily, we’re able to always have that base that we—for some reason—wrote a couple records that people just think are really good. A lot of bands have that [success with several records] and a lot of bands are never able to live up to [their past success]. Sometimes that ends bands; sometimes it’s whatever.

Like, why would Bad Religion stop playing? Because you don’t like their new record as much as Generator? Clearly, their new music is better than that old stuff; it just means something different. You’re still going to go see them, and it’s still cool when you go see them and they play one of their new songs and it’s like, “That’s a pretty good song.” It definitely doesn’t mean as much to me because I didn’t listen to it when I was 16, but it’s still cool and they still write good songs. You can either accept [your past successes for what they are] and make music because you like making music or you can let it be the end of your band because it’s like, “Oh, nobody gives a shit anymore. What’s the point?”

Yeah, that comes along with being a career band. Bad Religion are, what, 15 albums in? I still buy them!
Exactly. And they didn’t even get big until after 15 years they were a band. They were a band for 15 years and then punk rock got “big.” You just never know. If you stay a band and continue to put out good music and don’t get discouraged by trying to fall into the game of “We need to do this and we need to do that to be successful” and you just keep doing what you’re doing, eventually you’ll come out at the end and you’ll be one of those bands that’s still around. That was always the goal—how long can we do this? Now that we’re out on the other side and it’s like, “Okay, we’ve lost a lot of members, but I think we’ve added a lot of cool members that have made the band better.”

And that’s awesome you guys are here and are at the point where you get to go, “Here’s our greatest hits of our first decade.” That’s quite the accomplishment in today’s scene to go, “Holy shit. We did it—we’re here.”
That’s sort of the whole thing behind it: We’ve been a band for 10 years now, we’re going to go out on Warped Tour and we have a couple things coming out on vinyl—what else can we do? We’re not ready to write a whole new record, but it would be nice to have something out there while we’re touring because that’s just how you have to do it now. It’s just so competitive, you have to have something out to tour. alt