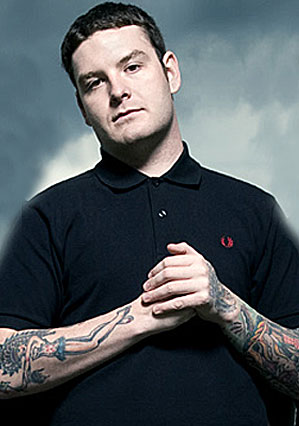 SENSES FAIL frontman Buddy Nielsen has been crooning dark missives via even darker imagery for six years now. Though the band have always managed to fix their catchy emo-punk jams with enough of a smoldering aesthetic to match Nielsen’s frame of mind, never before have they traversed such terrain as on Life Is Not A Waiting Room. Their third full-length, which hit stores Oct. 7 via Vagrant, finds the band penning some of their most unwieldy songs to date, whether it be in slower restraints or metalcore-tinged blows. Brian Shultz recently spoke with Nielsen to elaborate on the addition of Hot Water Music bassist Jason Black, the band’s newly diverse approach and Nielsen’s extracurricular activities that nearly land him in waiting rooms.

The new record has some of your musically heaviest and slowest songs to date. Did you strive to achieve that sort of dynamic?
Yeah, totally. I think that’s the one thing that we wanted to have. But it’s fun because you can go one of two ways: You can make the record a heavy record; [or] you can make it a catchy record. We always try to balance it as best as we can. But basically it comes down to what songs came out the best. And those are the ones on the record.

And you also gotta write good songs. You can write a whole metal record that sucks. Just because it’s heavy doesn’t mean they’re good songs. I think the hardest part is writing a song that’s good–that’s timeless and works to the full extent with how it flows and what the lyrics are, the melody and the guitar leads and the drumming.

Could you ever see the band doing a joke metal gig on the side, like New Found Glory’s International Superheroes Of Hardcore?
How much fun would it be to write a Pantera record, just for fun…just to write something really heavy and technical? I think we could do a good job of that. I don’t know. I don’t know if we’ll do that. I definitely think for the next record, we’re definitely gonna change a little bit just because it’s bound to happen. [When the time comes] I’m sure we’ll think, “Oh, fuck, we have to step it up. We have to come out with something that’s even more [made up of the] aspects of what we’re capable of doing.”

As far as the heavy stuff goes, I’m sure producer Brian McTernan was a big help considering his experience with heavy bands like Converge and Darkest Hour.
Yeah, totally. The challenge with writing something heavier is to still have melody in it and still have it not just be about losing song structure [and] losing the idea of writing a song within a kind of heavier vibe. You have your verse/chorus/verse/chorus thing with a pop song, but in any song you’re able to explore a bit more–try and change things up, but you don’t want to lose what makes a good song. That’s McTernan’s thing. He’s really helped us with songwriting. Getting Heath really helped, too, [being] a counterpart for Garrett to be able to throw ideas off of. It’s definitely been a good thing.

Wolves At The Door – Senses Fail

For some reason I was under the impression that your problems with drugs ended long before this album was written and recorded.
What do you do when you break up with someone is you fucking drink. You go out and drink with your friends. You get fucking wasted. That’s a lot of what it is. I wouldn’t say I have a problem. When you’re kind of down and out, it’s something that you tend to associate with, at least with me and how I tend to deal with things–not necessarily the best way, but it is part of associating dealing with a loss…alcohol-induced relations, I guess. [Laughs.]

So those problems did bubble up over the last two years or so?
Oh, yeah. Dealing with anxiety and stuff like that, I don’t think that [it] magically goes away. There’s no magical cure for it, but I think it’s something you deal with and learn to cope with. It’s something that never really leaves you once it happens. At least for me–that’s my experience.

Was there a breaking point?
I would never say that I hit rock bottom. I’d never say [that]. I don’t think there’s ever really been a breaking point because I’m able to consciously look at my options and what I’m feeling and every time that I could head down that road. I [do] tend to let myself go and… I’ve been caught by my parents and all the good friends I have. Any time I could go there, I don’t. I get reeled back in, which is fortunate.

Do you still struggle with depression?
Yeah, man. It’s not as bad as it used to be. When it first starts out it just knocks you off your feet, but now it’s something that I’ve lived with for six years–maybe five years. Who knows. But you understand how to manage it better.

On your current tour with Dance Gavin Dance, is there anything you’re looking to do differently?
We’re gonna play a lot of new songs. But we always try to get everything in there. We put about 15, 16 songs [in the set list]. Six of them are gonna be from the new record and the rest from the [From The Depths Of Dreams] EP, Still Searching and Let It Enfold You. We don’t want to play more than that–playing more than an hour and 15 [minutes], especially this kind of music, it just gets tiring. We’re not gonna go put on a three-hour set. I don’t think anybody wants to see that. It’s hard sometimes to be like, “Fuck, how are we gonna fit all these songs in here; what songs should we play?” That’s the hardest part about making a set list.

How did new bassist Jason Black of Hot Water Music and the Draft come to join the band?
He heard that our bass player left, called Brian McTernan–because he’s done Hot Water and everything, and [they] go back awhile–and he was like, “Hey, do they need a bass player? Can you get me one of their contact numbers?” Jason gave me a call and I was like, “Yeah, come up. Let’s jam.” [Vocalist/bassist] Brendan [Brown] from the Receiving End Of Sirens was actually gonna come play with us, too, but he ended up having a kid–well, we knew he was gonna have a kid, but I think he was [saying], “I don’t necessarily know that I can go ahead and make a commitment to you at a stage in my life that’s gonna be pretty [hectic]… having a first kid and having a band that really didn’t make a ton of money.” So he was thinking where his life was going and his whole situation. He was like, “I can’t commit to this.” And we were like, “Well, fuck, man.”

With Jason, because he lives so far away, we were a little apprehensive at first. We’re like, “Well, Brendan, he lives in Connecticut. He can come down and practice all the time.” But Jason’s such an amazing bass player that he can show up the day of tour and everything would be fine. When Brendan backed out we went, “Well, fuck, let’s call Jason and see if he still wants to do it.”

How do you think he helped shape the sound of the record?
Just adding another dynamic that we’d never had before. Having the dynamic of intricate bass playing. We’ve never had that. Having someone that can get together with a band and really work on changes and work on the exchanging of different ideas and make the sound deeper.

How long will he be with the band for?
As long as he wants!

Does that include this tour?
Yeah. He’s gonna be on tour.

Did he give you a timeline or anything?
I mean, until he doesn’t want to play music anymore. [Laughs.]

Between his resume and Heath being formerly of Midtown, are Senses Fail just going to become a punk-rock supergroup at some point?
[Laughs.] I hope no one else leaves! I highly doubt that Garrett or Dan or myself will leave Senses Fail. I think we’re pretty much set unless we wanna go out and get James Dewees to play keyboard or something. [Laughs.] alt