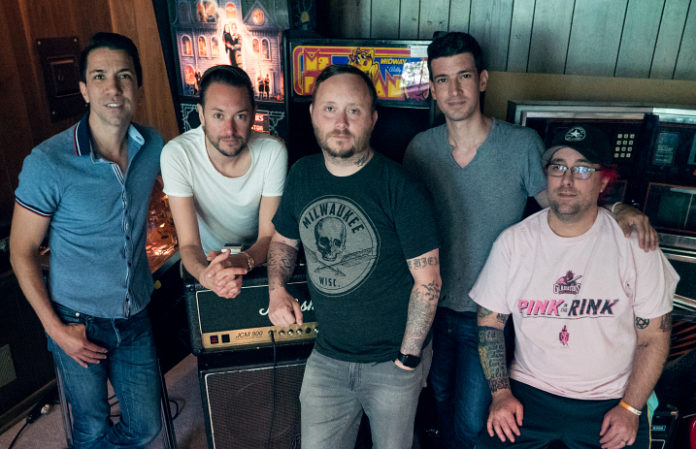 Beloved Chicago pop-punk act Showoff are showing off their new jam after quite the break from music. In the late 1990s, Showoff's self-titled third album was one of the first to be produced by John Feldmann before he became a legendary producer with dozens of our favorite records under his belt (those of Goldfinger, Good Charlotte, The Used, Panic! At The Disco, Sleeping With Sirens, etc.). The band quickly evolved from a fresh Chicago rookie band to one with the resources of Madonna's Maverick Records.

With an interesting rise-and-fall history, Showoff reformed in 2014 with a mostly original lineup, which consisted of Chris Envy (Chris Messer) on vocals, Dave Envy (Dave Hyde) on bass, Dan Castady on drums, Darren Vorel and George Castady on guitars. With this current lineup, one thing is for certain: The members are at the peak of their musical careers, and it was a no-brainer to combine everyone's unique skills in the studio and record a new album. They are putting all of their hearts and souls into this upcoming batch of songs—entitled Midwest Side Story— which will drop on September 22 via Dodgeball Records, a new label founded by the Showoff frontman himself.

Listen to “Popular Kid” below:

“The song is about my life growing up, but we all feel its relatable to all people who feel disenfranchised or made to feel bad about themselves,” the vocalist says. “Basically, it lets them know that they aren’t alone; and the people that matter in life, don’t care if they are popular or not, they care about them a human being on a much deeper level.”

In honor of their upcoming album release, Showoff will be playing a local Chicago show with Punchline at Reggie's Rock Club on August 12. Click here for tickets. Follow Showoff on Facebook or Twitter for more updates!