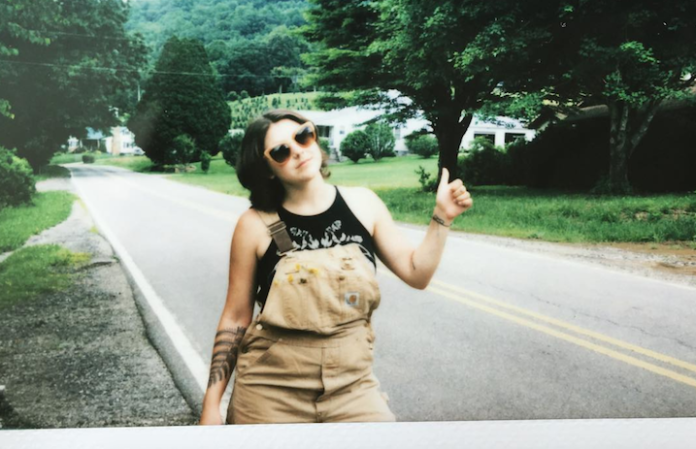 It’s been roughly a decade since Sierra Kusterbeck first took over vocal duties for VersaEmerge at just 16 years old. Following some success, numerous personnel changes and a name adjustment, the band eventually dissipated sometime in 2015 as Versa. In the two years since, Kusterbeck, now going by Sierra Kay, has stayed active. When not “walking the line of good times and danger,” the now 26-year-old is creating a different sound under the banner of Neaux with former Trash Talk member Nick Fit. The duo’s second album, titled Chain Up The Sun, is set to be released Oct. 13; and you can listen to the full stream below―ahead of its release.

A departure from her emo-rock turned mood-pop explorations of old, Neaux conjures up a noisy alternative rock with a droned-out patina of punk. It’s as if Tragic Kingdom-era No Doubt dabbled in shoegaze. “We wrote these songs about a year ago; and at the time I was listening to a lot of Sonic Youth, Slowdive, Angel Olsen, Father John Misty, Sharon Van Etten, Lana Del Rey [and] Title Fight. Really it’s all over the place, but I think you can hear a bit of everyone in there. Now I’ve been listening to a lot of classic country and soul and even more female singer-songwriters. We’ll see where that takes us,” she says laughing.

Neaux was born of a handful of Fit’s “distorted, blown-out bedroom demos,” which Kay would contribute vocals to―a combination that would eventually result in the pair’s eight-track debut, Fell Off The Deep End. Less refined than their more recent offerings, the band’s introduction offers a raw look into a matured and experienced frontwoman, whose fans had previously associated her work with seemingly synonymous brands like Hot Topic and the Vans Warped Tour. In between the music, though―in between the lines of these songs―is a self-proclaimed nomad who charged at life head-on, while essentially falling off the musical grid for a brief stint after feeling burnt out.

“I didn’t realize how much I needed nature in my life. I spent so much time touring and seeing it pass by my window. I really just wanted to feed my inner kid and climb trees, skinny dip in rivers and hike above the alpine lines,” Kay says. “I also figured [that] if I wanted to make music again, [I’d] need to live an extraordinary life to write some extraordinary songs. I want to have stories worth telling, and holy shit do I have stories now.” Further explaining her recent lifestyle, she adds, “I’ve found that I really enjoy walking through all kinds of worlds. I like to drink at biker bars and dance with strangers and sleep on the side of country roads. It hasn’t always gotten me in the best situations, but I’m learning. I’m a born nomad, and I feel like I belong everywhere and nowhere all at the same time. There doesn’t seem to be a place for me in the real world, so I’m just gonna keep doing what I have to do to make it in my own.”

Like anyone with internal struggles, though, even a seemingly freewheeling way of life isn’t an end-all remedy. “It’s not always fun and carefree,” Kay admits. “I only show what I want to show on social media. I find it difficult to share my personal struggles; that’s why singing and writing is so important for me. It’s the only way I can really communicate the hard stuff.”

Those familiar with Kay’s early work as a vocalist and songwriter will immediately notice the progression in her voice and in her words on Chain Up The Sun. The release―a particularly apt noun in this case―runs the gamut of emotions and life experiences, from the rigorous “Luv,” to the sex-focused “Laughing Hyenas,” and the harshly reflective “Stuck Like A…,” which Kay refers to as a “cathartic confessional” when performed live. “I end up all over the floor. It feels really good,” she says confidently.

When it comes to getting older and having a more experienced perspective on life, Kay explains, “I’m more mature, but not by much. I care about different things; I focus on my well-being and surrounding myself with an environment I enjoy rather than one I have to put up with. I used to praise myself for my adaptability, but I realized when you’re too adaptable you don’t have limits and your needs aren’t met. I have limits and boundaries now,” she adds. “I’m still navigating what it is to be a female adult. I had to dig up all this internalized misogyny that’s been embedded in me since I can remember. Just a lot of work emotionally.”

These struggles take a toll mentally and physically, but as a creative there’s also passion and profession to take into account. “I had to spend a lot of time rewiring my brain as a musician,” Kay says. “I had to let the walls that were built around me crumble down and bury the ridiculously high expectations I had for myself. I never even considered myself a musician, but I think I’m getting more comfortable with that. I’m having fun making music again. Looking back, I had a wonderful time but it started turning into very hard work, which is necessary, but sometimes you push and pull too much and lose the spark. I’m just glad I experienced what I did at such a young age. I’ve had the time to relearn. Those days are dear to my heart; they made me who I am and gave me a lot of insight. Those days also made my foundation as an artist. I still have this amazing fan base of people who follow me and really care. It’s the most comforting and magical shit! They give me some meaning and make me feel worth it.”

“I had to dig up all this internalized misogyny that’s been embedded in me since I can remember.”

Kay’s return to music has seen widespread positive reaction, even with many who weren’t sure what to expect after her time away. Taking a step back to enjoy life and reevaluate is a bold move, but it appears to have paid off. With Neaux, Kay seems comfortable and open, both in talking about the project and in the music itself. “I totally resonate with the freedom of this sound, not really having any rules or somewhere specific that we’re trying to go. I feel that way in my current life,” she says. Speaking about her break from industry life, she continues, “I actually really enjoyed not worrying about music for a second because I was feeling guilty for having writer’s block and feeling like I didn’t have much to offer. I didn’t even want to talk about music. There was definitely some time where I thought I wouldn’t make music ever again. I didn’t really know what I was worth, and I was feeling lost and abandoned by all the people I was working with for the past eight years. I had a handful of existential meltdowns and couldn’t find a good reason to even be here at all.”

Ready for this eclipse & that Leo moon

Despite the difficult times, the doubt and the disillusionment, Kay made a change, took chances and was able to rekindle her passion for music. “I’m an overthinker, and everything I do needs a meaning,” she admits. “It’s pretty exhausting, [and] it takes time for me to get over things and really heal, but I started missing playing live shows and that’s around the time Nick hit me up. Then I settled in New York, finally let go and could write again. So I guess I’ve returned from being off the grid, and now I have Neaux and other music projects in mind that I’ve been writing for and want to make happen.”

As for expectations and the future, Kay says, “I think Neaux will go [on] as long as I feel I still have songs for it. Of course success is what every band wants. We would love to tour a whole lot more. We’ve only done a few things here and there. But in the grand scheme, I just want to make genuine music for as long as I can, in whatever music project I do.”

You can preorder Neaux’s Chain Up The Sun right here.