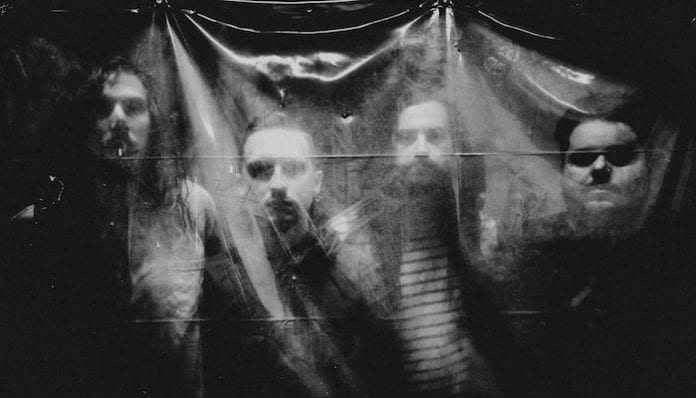 The end nearly began for Silent Planet frontman Garrett Russell during the creation of the band’s upcoming third album, an explosive blast of metalcore that will leave your heart as battered as your eardrums.

Following their underdog win at the 2017 APMAs on the strength of the California-based act’s second effort Everything Was Sound, the musician found himself plumbing the depths of depression as work began on the follow-up, When The End Began.

“I was super-depressed,” Russell says of his emotional state. “Like, it was physically hard to get out of bed. For the first time in my life, I was so depressed that I felt my body actually aching from it.”

That’s a far cry from the rally that earned Silent Planet Best Underground Band, the award first presented to drummer Alex Camarena, guitarist Mitchell Stark and bassist Thomas Freckleton while the usually jocular lead vocalist took a bathroom break. “I was genuinely taking a shit when they called our name,” he jokes. “I didn’t think we’d win it.”

It went from there to despair, however, and the frontman paints us a portrait of doom so vivid that only those who’ve experienced it firsthand could be expected to understand. As the band worked on new tracks, the embattled bandleader considered unspeakable ideas, sinking into a toxic quicksand of suicidal thoughts during the creative process.

“I kept telling myself that I was allowed to think about suicide, as long as I thought of it as something that I would do once I got out of the studio.” —Garrett Russell

Those terrifying visions are something Russell’s familiar with, unfortunately. Yet they form part of Silent Planet’s thematic appeal to a wealth of heavy music fans. The vocalist’s unfiltered experience and intentionality yields a special relationship with listeners. (Plus, his unique presence is practically legendary within the scene.) But Russell’s insight into mental health isn’t solely empiric. He’s actually a former therapist with a degree in psychology.

“I was in a doctoral program, and I initially signed up thinking I’d do it for five or six years,” he explains. “But things took a crazy turn. I finished college in 2012, right when we had first started touring. Then I went to grad school for two years and got my masters in psychology. But if I hadn’t turned left into touring, and just continued going straight, this band wouldn’t really have ever materialized.”

And thank god, one might say, that the band did materialize. Because they’re purposefully lighting the way in a world predisposed to destruction. Powerful When The End Began tracks such as crushing addiction dirge “Share The Body” and “In Absence”—a touching alt-metal ballad dealing with loved ones experiencing memory disorders—mark the band at an enviable and wholly unique post, a spot seemingly unchallenged by any other artist.

“One thing that I’ve been disappointed with is that a lot of bands aren’t really talking about much,” ponders Russell. “I hear cool music and stuff, but they don’t seem to be really going after it, talking about serious issues. And I’m a little bummed by that because I think the more heavy and gritty the music is, the more people should be willing to be really outspoken and talk about real stuff that people are going through.”

And that brings the frontman to one of the main reasons he’s willing to tackle the “real stuff”: his Christian faith. “I’ve never really gotten the vibe that we’re considered a ‘cool’ band,” he confesses. “And I think part of that has to do with being associated with Christianity. There are people who would never be caught dead listening to us.”

“I hear cool music and stuff, but they don’t seem to be really going after it, talking about serious issues. And I’m a little bummed by that because I think the more heavy and gritty the music is, the more people should be willing to be really outspoken and talk about real stuff that people are going through.”

But those who do heed the call, despite the whiffs of Biblical verse, enter a scary second world of meaningful reflection. It’s supercharged, uneasy and unlike any in recent metalcore memory, its weird aura perhaps coming close only to the ultra-aware nightmare-metal world created by Zao, also a band that was hampered by Christian connections. (Russell plays down any complimentary analogy to the elder act.)

And, again echoing Zao’s ascent two decades ago, Silent Planet received an early career boost from faith-minded music publications such as HM Magazine and grew a fervent segment of churchgoing listeners due to the group’s place on the Solid State Records roster, a label founded by legendary ’90s Chrindie tastemaker Tooth & Nail. But Russell holds that he can still speak his mind without accepting the “Big-C” label.

“We never claimed we were a Christian band,” he asserts. “Still, I’m not going to hide my faith because that would be disingenuous. I always thought the heavy music scene was supposed to be about being genuine. For me, that’s the genuine truth; I’m super-impacted by Jesus. His teachings literally inform everything I do. But I don’t really preach onstage because I don’t really have any interest in doing so. I just speak my conscience, and sometimes that involves telling people exactly how I feel about things.”

“We never claimed we were a Christian band. “Still, I’m not going to hide my faith because that would be disingenuous. I always thought the heavy music scene was supposed to be about being genuine.”

But let’s go back to the beginning. Regarding the frontman’s current mental wellness, he says that continued therapy and a change of pace from the recording studio back to the touring lifestyle has helped shake things up enough for him to break free. Free from the dark days of a life filled with compassion for others and a drive for unique creation.

“I like to remind people [that] I’ve been on both sides of the therapy room, you know? I’m slowly catching up, session-wise, on therapy. But that time in my life really shook me. A lot of the stuff that I went through, I pulled into the topics that we write songs about. And I grew out of it, but it was quite a time in my life. That’s for sure.”

When The End Began is out Friday, Nov. 2, and preorders are available now.