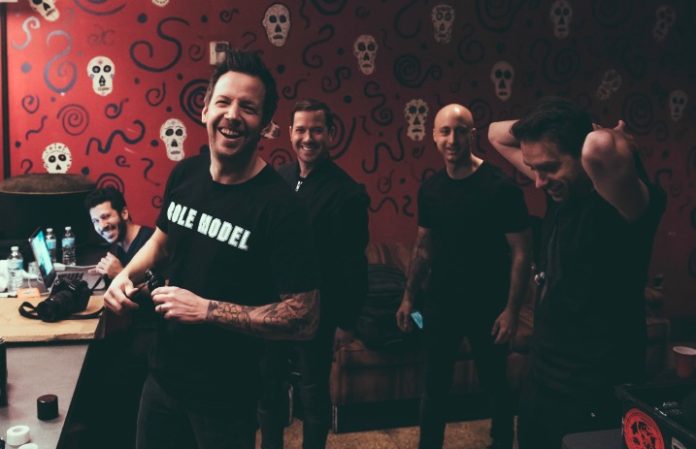 Fifteen years after No Pads, No Helmets…Just Balls launched Simple Plan from obscure Canadian pop-punkers to mainstream hitmakers, the band are spending the majority of 2017 on the road, revisiting the album by playing it front-to-back each night.

Before heading to Europe this month and coming back to the States for continued touring in August, the band and some of their inner circle caught up with AP to recount the often tumultuous processes by which No Pads came together. As guitarist Jeff Stinco notes, “There’s a tendency to unify the story and recollect what happened in a very glorious way, and make it sound as if it was one unified front. But I think what’s important is that it was five guys, who had completely different situations getting into the studio.” He pauses to add, “We had to survive.”

LIVING THE WORST DAYS EVER

JEFF STINCO: The process itself was long. Arnold challenged us a lot. That record could have taken, at the most, two months to make; it took a year. We were living in very close quarters, sleeping in a windowless room with bunkbeds. We were cooking for ourselves, which is normal, but nobody knew how to cook, so it was horrible. It was a tedious process. Arnold had this vision where he would say, “You guys record yourself, I’m going to come back and criticize and edit it,” and that’s exactly what he’d do. He would leave us days at a time in the studio, I would record the whole album, he would come back and be, like, “Yeah, you could do better,” and scratch everything I did. It was frustrating.

ARNOLD LANNI: It may have appeared that way, but when I was a musician, I never wanted people looking over my shoulder. I’d want the producer to say, “Here’s the song. Here’s what I’d like you to do. How much time do you need? An hour-and-a-half? I’ll come back in an hour-and-a-half because that way, I’m not looking over your shoulder as you track it.” It was just to get them to chase what they wanted to chase. If you aim for a target and you don’t hit the target, I have to at least mention it. On some occasions, I’d say, “Here’s what I want you to do. I’ll be in the next room, or I’ll come back in three hours after you have a chance to lay this down.” If it wasn’t what we as a group talked about, I’d come back and say, “Yeah, this is unacceptable.” It was never anything personal; it’s just hard sometimes to explain to a young person what they don’t know. Because Jeff’s such a talented musician, I would have him do things that were probably just a little bit outside of his comfort zone—not in a technical sense, because there’s probably nothing that Jeff can’t play, because he’s just that good—but I was doing things to have him create tension and atmosphere within a track. Things like that, I don’t know if he, at the time being so young, understood.

PIERRE BOUVIER: There were some difficult times, for sure. We felt like it was a pretty big opportunity for us and we didn’t want to mess it up because if you mess up your first record, you’re kind of doomed. I think Arnold is really an artist, and I think he gets caught up in that “let’s make this the best that we can” [mentality]. We were working with Arnold for about a year-and-a-half before we got signed, so we spent a lot of time together and there was a lot of clashing of opinions. He came from a different world than we did, and he wanted to push the quirky, pop side of what we were doing. We were more of the pop-punk guys that wanted to keep it a little more simple. He would say there was no dynamic in the band. We were all perfectionists. Some days, I’d sing vocals for a whole song—lead vocals, backing vocals, everything. I’d spend hours and hours and hours while he was out of the studio, doing something else. Then he’d come back at night, at 9, 10 p.m., and listen to them, and be like, “Yeah, I don’t know. I’m not sure I’m feeling that; we’re going to do that again tomorrow.” And I’d be like, “What? I just sang my heart out all day and that’s not cutting it!”

DAVID DESROSIERS: It was my first time in a proper recording studio. I was very overwhelmed and intimidated by the process. Arnold’s vision for the band was that the singer was singing weird stuff and the guitar players should use different types of chord structures, whereas we just wanted to play really hard.

BOUVIER: Arnold was really trying to make us sound unique and different and one of the ways he was doing that was pushing me to sound—and I’m quoting him—“to sound more whiny.” There were some singers back in the ’80s that to my ears sounded kind of goofy, but he was like, “Push the teenage, annoying voice more,” and I was like, “No, I don’t like it!” When I listen back today, I think that record is the one where my voice sounds the most whiny and it really irks me. I find it hard to listen to.

When I listen back today, I think that record is the one where my voice sounds the most whiny and it really irks me. I find it hard to listen to.

DESROSIERS: Arnold had this analogy he would use: “Right now, I’m John McEnroe, and you guys can’t return my serve.” We always wanted to say, “How about you try to be the retired excellent tennis player who’s now coaching this new tennis player?” [Laughs.] I think that would have worked a little better.

LANNI: I do agree with the fellas that it was tough. I think a lot of it was due to the fact that they were just so young and eager. They knew who they wanted to be; they were full of piss and vinegar and protective of what they wanted to do. What we all understood was we all wanted the same thing: We wanted to make a record we were proud of and we also wanted to make a record that was hopefully going to stand the test of time. To do that, what I tried to bring to the table was, how could we set ourselves apart from everybody else, and that was probably the hardest thing for the guys to understand at such a young age.

ANDY KARP: You had a lot of strong personalities. Arnold’s a taskmaster, and he’ll tell you that. He works singers really, really hard. I was up there fairly regularly during recording and I remember feeling a little bit like a psychotherapist, sometimes like a diplomat, but that comes along with the job.

BOUVIER: Arnold was really pushing us to the extreme to the point where sometimes we’d just want to be like, “Go to Hell, dude. I think this is really good, and I don’t know what you’re talking about.” [Laughs.]

LANNI: I always knew, because they were good kids and they were arguing for the right reasons, it wasn’t a pissing contest, where it was just about winning for winning’s sake. They just wanted to make a great record, and we just disagreed a little bit about how to get there. I kid with the guys now and say if we went back and tried to make that record now, I think 90 percent of the things we thought were challenging probably wouldn’t be an issue today by virtue of the fact that we’re a little bit older. I remember after the record was done, we didn’t talk. We didn’t speak for a while and it wasn’t anything personal; it was just that they were really challenged. I applaud them because they never quit, they never, ever quit. I’m kind of notorious for trying to get the most out of somebody, but I never asked them to do something that they couldn’t do. I think looking back, it’s been 15 years and that record still holds up. Melodically, it’s a masterpiece. The songs are amazing and that’s because there was a lot of friction.

BOUVIER: There’s no right or wrong and I think for young guys who just got signed, we thought we knew what we needed and he thought he knew what we needed and they weren’t always the same things. At the end of the day, I think the record was great. Our relationship with Arnold was tested many times during that record, and by the time it was done, I would say we definitely needed a break from each other. There were probably some bad words that were exchanged about what we thought about each other, but what’s great is that after all that time, our relationship with Arnold has become better and solidified and we realized all the positives he brought to the record. It says a lot that today, we’re good friends. We just needed a moment after that to breathe. It was such an intense period.