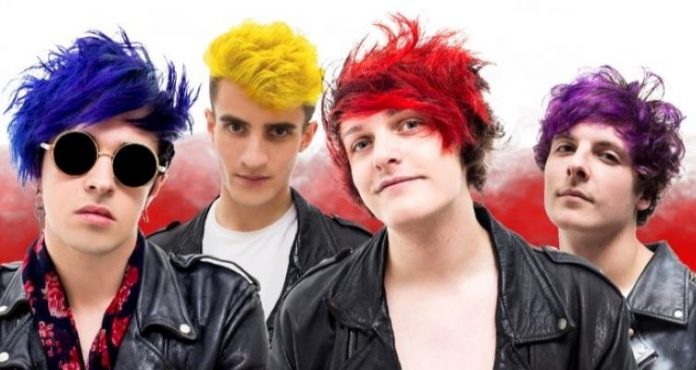 Introducing Single By Sunday, four lads from Scotland who will put a smile on your face in no time. Today, AltPress is premiering the video for the band’s track “Debbie.” SBS pour synthesizers over your pop sensibilities, and the world seems fun again. Besides, how many cheerful songs about getting ripped off are there, anyway?

“What should have been a simple purchase of a pair of jeans turned out to be a ‘nod your head bop’ of a tune,” the band write in an email. “The short story is Jonny [Eakins, guitarist] tried to buy some jeans and got ripped off!”

Never has dealing with rude retail workers been so gratifying. You’ll need deep hypnosis to get the vocal hook out of your head.

And we haven’t even talked about the video. A total DIY production, Single By Sunday invited some fans to join them. (Some drove as far as 300 miles to get there.) According to the band, “the only brief that we gave people was ‘you need to be up, happy and prepared to go for it.’ The inadvertent star of the day turned out to be Summer, the baby, who would only smile when she wasn’t being filmed.” One fan turned up so excited to meet the band, she had an anxiety attack and unfortunately had to sit out the video shoot. Pay attention to singer Josh Ladds at the 2:20 mark.  He drew some knee blood during that power slide toward the camera.

Check out Single By Sunday’s new one and make plans to have the best party ever once this pandemic lifts. Oh, and since you asked, the band tried to contact the real “Debbie” to make a cameo in the video. No luck, but no big deal. With all this fun going down, who needs a joy killer?