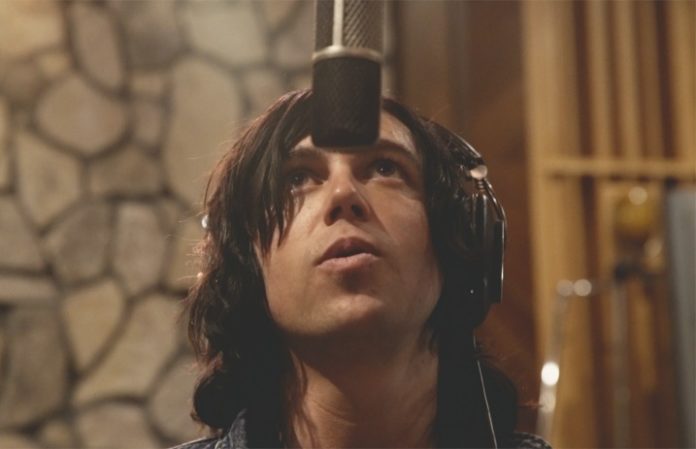 “The artist's job is not to succumb to despair but to find an antidote for the emptiness of existence.” – Woody Allen (Midnight In Paris)

When AP meets Sleeping With Sirens vocalist Kellin Quinn and guitarist Jack Fowler, it’s in the isolated New Jersey lake house they’ve been temporarily living in. They invite us to sit and talk with them in the sun room, which on this particular day is letting in the light of a gray and dismal afternoon. The room is bright, though, and the ceiling-to-floor windows make the otherwise shadowy house feel open and expansive. Still, Quinn attests that he is convinced there is a ghost in the house, as he hears “pitter-pattering” at night. It is here where it’s clear just how the past six months of recording their upcoming record has transformed them.

Read more: Sleeping With Sirens’ Kellin Quinn opens up on his voice

“For me,” the vocalist starts, “the biggest thing was understanding what it is to grow up. I’m definitely older than I was when I made my first record, and it was important for me to sound my age.” A lot of musicians claim that their latest album is “more mature” than their last, but what did it actually mean for Sleeping With Sirens to grow up, both as individuals and as artists? It’s a question producer David Bendeth essentially asked them every day in the studio as he pushed and prodded them.

Unexpectedly, the answer came to Quinn in the form of confronting a fear, one that no one would guess he had in the first place. “A lack of confidence has been my thing,” he shares. “I’ve struggled with depression my whole life, but it’s definitely resurfaced in a big way. A year ago, I had a full-on anxiety attack onstage. It’s made me reground myself. When I was younger, I didn’t have any cares or fears. As you get older and you have a family, some of those fears come to you. This record is going to be [about] overcoming that and being more confident in myself and the music that I write.”

He and Fowler are quick to describe the new record as dark in both sound and lyrical content. But like all things, darkness has its natural opposite, and that’s an element that SWS never forget to include in their songwriting. “I think [it’s about] being lost and then finding hope,” Quinn says. “It’s a dark record. It sounds dark, but there’s a hopefulness in everything. That’s always something I’ve tried to do as a vocalist. When I write about a sad topic, I always want there to be a light at the end of the tunnel.”

Fowler adds to this story of struggle by opening up about his own misplaced sense of self. “I think my biggest weakness before this record was just losing touch with my own musicianship and myself. There’s a lot of things that I’ve done over the last four years that I’m not very proud of. The turning point for me on this record was when [Bendeth] said, ‘You would rather walk to the fridge and grab a beer than pick up your guitar. Is that true?’ And I said, ‘Yeah. And that’s changing right now.’ It’s crazy how much things have changed in the last couple months.”

Unlike the band’s previous two records, Feel and Madness, this new record has taken a lengthy six months to record. Fowler optimistically describes this period as being “like therapy,” while Quinn admits “it’s the most stressful record” he's made in his career. Such accounts have been made before by many bands about what it is like to work with the “hard ass” (as Quinn affectionately calls him), Bendeth. So, some days later, we visit the studio where they’ve been recording to see what the real deal is with this tough, scary producer, and to catch a glimpse of what life is like for SWS behind the scenes.

Inside and out, Barber Shop Studio looks more like a gothic church than a studio, made of stones and stained glass windows of various hues. But up the stairs are the familiar faces from the lake house and the studio team, minus Bendeth. He’s an hour or so late, but the boys occupy themselves by flying drones and watching hilarious interviews with artists such as Miles Davis and a very high James Brown. Such entertainment choices raise an interesting point: Why are some guys in a pop/rock band paying such close attention to blues and funk musicians in the first place?

During the first meeting, Quinn and Fowler said they had pulled from different musical backgrounds for their new material, with Quinn describing the new music as “more soulful. It’s got a lot of blues roots to it, which is cool. [Jack] comes from Florida and he grew up on Lynrd Skynrd and those rock bands, and we’ve never utilized that kind of sound. Not that we sound like Led Zeppelin or anything, but it definitely has that classic vibe to it.” Reflecting on that now, it’s still hard to imagine how in the world a band so focused on the pop sound could incorporate the blues and soul into their music.

Luckily, Bendeth wanders in soon after to help get to the bottom of the mystery. While Quinn is in the vocal booth, cursing every time he doesn’t nail a take, there are snippets of ooo’s and whoa’s, clapping and humming against soul beats. The loose ends connect. The pop sensibility of SWS’s last record is not lost by any means, but this time it carries a weight. You can hear there is heart and spirit behind the music; the sounds are full and robust. When asked what it is he does to his bands to be able to get such an earnest sound out of them, Bendeth doesn’t bare his big bad teeth. He even wonders aloud why he has the reputation he does. “My job is to tell [bands] the truth,” he says with a simple kind of wisdom. He cites psychoanalyst Carl Jung, a man with whom he has been fascinated, as part of the basis for his own psychological approach. “Music is your subconscious,” he explains in his deep, scratchy voice, not unlike Miles Davis himself. “I was wondering about how to ignite the subconscious mind in the studio without them even knowing it.” He had picked up on Quinn’s lack of confidence and Fowler’s disconnect with his instrument immediately.

“I could see that there were guitars lying in the studio when we first started and [Jack] wasn’t picking them up. He wasn’t picking them up and playing the songs, he was just playing anything, which sort of gave me the feeling that he was lost. He didn’t love any of his guitars. I know that every guitar player has a favorite, and he didn’t.”

As for the vocalist and frontman, Bendeth says he knew Quinn’s greatest weakness the first time he ever saw him perform. “Here’s this fantastic voice and a fantastic showman and he’s got his side to the audience because he doesn't wanna look ‘em in the eye—because he didn’t really believe in everything he was saying. I wanted him to have lyrics that [he] could look ‘em in the eye. The next thing you know, this transition happens, of confidence.” It’s this ability to delve deep into musicians’ minds that ultimately helps transform them and their records. “Musicians and writers historically get in the way of their own songs,” the producer says. “I don’t really care if they hate me. I look at it as though I’m saving their kid. And I always try to save the song, even in spite of [the band].”

This transcendent experience is imprinted on the band’s faces and in their behavior. Today is the last day of recording for the band, and as such, Quinn and Bendeth exchange farewells. Fowler admits that his favorite part of the studio process has been getting to spend more time with Quinn. Quinn says he loved watching the personal and musical growth of himself and his bandmates. They are honest and emotional confessions that echo the content of the new songs.

“I think we’re a completely different band as opposed to the last time you saw us,” Fowler revealed in the supposedly haunted lake house days prior. “If you see us on this record [cycle], you’re gonna have the best night of your life and the best show [from] our band. It’s gonna make you dance, it’s gonna make you cry.” While certain ghosts still follow each member around, it’s clear that creating their fifth album has both lifted them up and grounded them. As far as they’re concerned, what fans will hear of them on this album is a more true representation of Sleeping With Sirens. They’ve finally taken the time and put in the grueling work to find themselves.